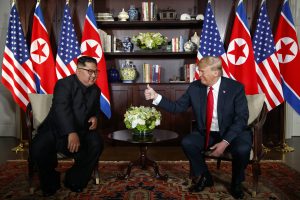 The leaders of the United States and North Korea met in-person at a historic summit in Singapore, where they signed a broad agreement to continue working towards denuclearization and a change in the economic sanctions.

Trade relations between the U.S. and China took a turn as President Donald Trump approved $50 billion in tariffs against Chinese exports, from high-tech to manufacturing products, triggering retaliatory tariffs of “equal strength” on a variety of American goods, including the agricultural industry.

After an 18-month investigation, the Department of Justice’s (DOJ) inspector general released a report criticizing former FBI Director James Comey for his handling of an investigation into presidential candidate Hillary Clinton’s use of a private email server during her time as the secretary of state.

The DOJ also ruled to not stop a merger between telecommunications giants AT&T and Time Warner, paving the way for other potential mergers, such as the competition between Comcast and Disney to purchase a portion of 21st Century Fox. However, the DOJ has 60 days to appeal any merger.

Ex-Trump campaign chair Paul Manafort has been jailed pending trial on multiple charges ranging from witness tampering to money laundering and conspiracy. He pleaded not guilty to the most recent charges.

President Trump, his three adult children, and the nonprofit Trump Foundation stand accused of violating state and federal laws by using charitable funds for personal use and political gain. The lawsuit was filed by New York State’s attorney general following a two-year investigation.

Another round of primary elections were held in several states, with wins for both Republicans and Democrats. In another contest, the United States, Canada and Mexico won the right to host  the largest World Cup ever, in 2026.

In immigration news, victims of domestic abuse and gang violence will no longer be allowed to seek asylum in the United States, announced top DOJ official Attorney General Jeff Sessions.

1. What Happened in the Trump-Kim Meeting and Why It Matters – The New York Times, Max Fisher

Top line: “Even the most informed observer might struggle to know what to make of the summit meeting between President Trump and Kim Jong-un of North Korea. Here, then, is a simple breakdown of 10 major takeaways from the meeting and why they matter.”

Top line: “China’s government responded quickly to U.S. President Donald Trump’s tariff hike on Chinese goods by announcing Friday it will immediately impose penalties of “equal strength” on U.S. products. The Commerce Ministry said it also was scrapping deals to buy more American farm goods and other exports as part of efforts to defuse a sprawling dispute over its trade surplus and technology policy. A ministry statement gave no details, but a $50 billion list of possible targets announced in April included soybeans, light aircraft, orange juice, whiskey and beef. Much of the impact would fall on Trump’s rural supporters.”

3. 5 takeaways from the inspector general’s report on Comey and the Clinton email investigation – The Washington Post, Callum Borchers

Top line: “Former FBI director James B. Comey predicted last month that the Justice Department inspector general “might bang me for [my] decisions.” “Bang” turned out to be a fittingly forceful verb choice. In a report published Thursday after an 18-month review, Inspector General Michael Horowitz faulted Comey’s handling of an election-season investigation of Hillary Clinton’s private email use as secretary of state. Here are five key takeaways from the 500-page report.” 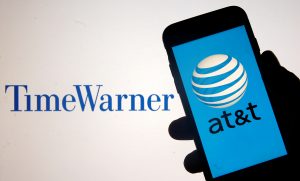 Top line: “AT&T completed its purchase of Time Warner on Thursday, shortly after the U.S. Department of Justice said it would not apply for a stay of a judge’s ruling letting the deal go forward. A federal judge ruled on Tuesday that AT&T’s $85.4 billion bid for Time Warner was legal, imposing no conditions on the merger. The government had the option to seek a stay, delaying the merger for a designated waiting period, but has forgone that option. The Justice Department can still appeal the decision, even after the completion of a merger.”

Top line: “Former Trump campaign chairman Paul Manafort will await his trial for foreign lobbying charges from jail. Two weeks after Robert Mueller’s prosecutors dropped new accusations of witness tampering on him, US District Judge Amy Berman Jackson Friday revoked Manafort’s bail, which allowed him out on house arrest. The order marks an end to months of attempts from Manafort to lighten his house arrest restrictions after he was charged and pleaded not guilty to foreign lobbying violations. Manafort also entered a not guilty plea to two additional charges levied against him last week, for witness tampering and conspiracy to obstruct justice. In total, Manafort faces seven criminal charges in DC federal court.”

Top line: “New York Attorney General Barbara Underwood filed a lawsuit Thursday against President Donald Trump and three of his adult children alleging a pattern of illegal conduct over a decade related to his personal charity. The allegations — which quickly drew scorn from the president — include unlawful political coordination with his 2016 presidential campaign and self-dealing transactions to benefit Trump’s personal and business interests. The suit before the New York Supreme Court grew out of an investigation launched by the Democratic attorney general’s office in June 2016. It also seeks special proceedings from the court to dissolve Trump’s charity, the Donald J. Trump Foundation, and obtain $2.8 million in restitution and other penalties.”

Top line: “Tuesday night’s primaries in Virginia, South Carolina, Maine, Nevada and North Carolina continued some key trends in the 2018 midterm election cycle. It was generally a good night for some of the Republicans who stick with President Trump — and not so good for some of the others who have criticized him in the past. It was also a good night for women running on campaigns opposed to Mr. Trump, in a cycle that has more female candidates than ever before. Here are some key takeaways, and races, to remember as the election cycle continues apace.” 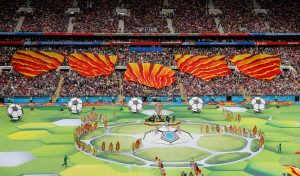 Top line: “The 2026 World Cup will be held in the United States, Canada and Mexico after their joint bid beat Morocco’s proposal to host it. The ‘United 2026’ bid was selected by Fifa member nations, winning 134 votes compared to 65 for Morocco. The 2026 tournament will be the biggest World Cup ever held – with 48 teams playing 80 matches over 34 days.”

Top line: “Attorney General Jeff Sessions unveiled strict new limitations on asylum applicants Monday, asserting that victims of domestic abuse and even gang violence would no longer qualify for such protection. The decision represents a dramatic shift from past practice, including those involving Central American women who have sought safe haven from troubled domestic relationships in which they were subjected to repeated physical, emotional and sexual abuse.”

Top line: “Overall, it was quite an impressive showing this year. The industry’s top game makers, including Nintendo, Sony, and Microsoft, as well as top publishers like Bethesda, Ubisoft, and EA introduced plenty of new games that people can get really excited about.

If you missed any of the big reveals or just want to see the highlights again, these were the 13 biggest announcements made at E3 2018.”