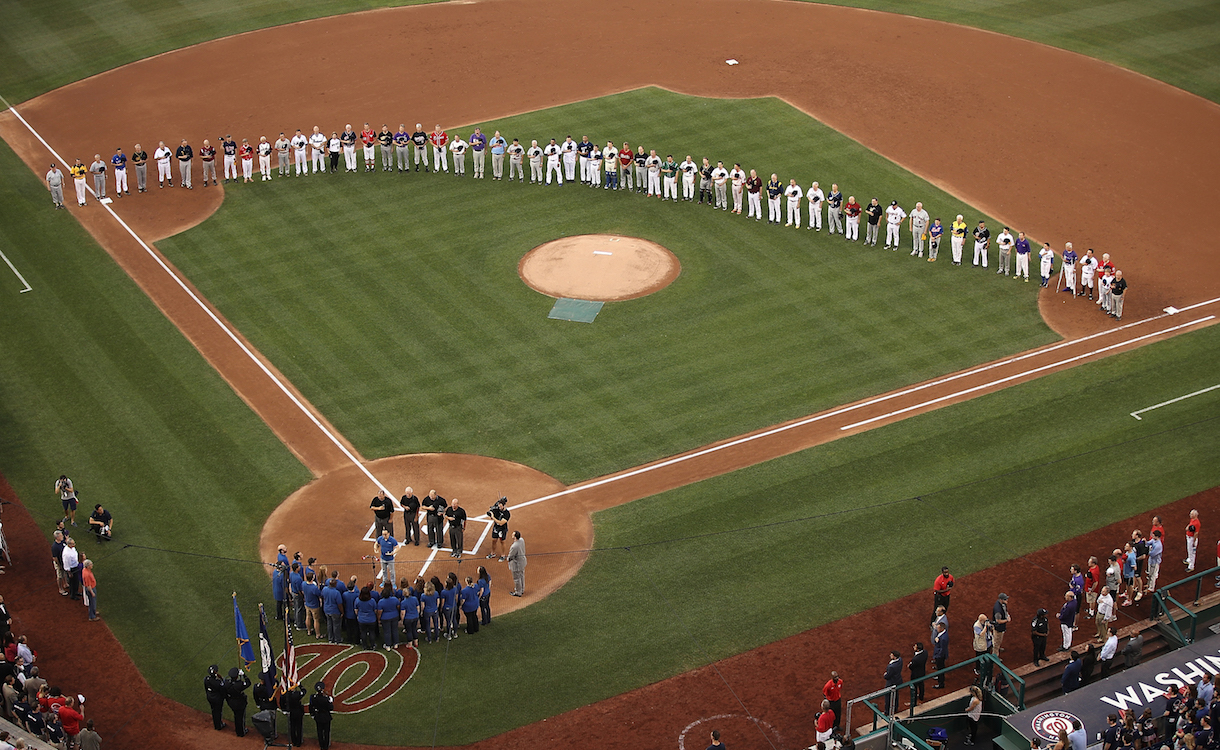 Members of the Republican and Democratic congressional baseball teams gather for a moment of silence before the Congressional Baseball Game at Nationals Park on June 15, 2017 in Washington, DC. U.S. Photo by Win McNamee/Getty Images

Republican Congressman Steve Scalise was wounded in a shooting in Virginia this week. He remains in a critical condition after being hit at a congressional baseball practice Wednesday. Two Capitol Police officers, a congressional staffer and a lobbyist were also injured.

President Donald Trump confirmed he is being investigated over his role in firing former FBI Director James Comey Friday. Trump called the probe a “witch hunt,” after The Washington Post reported that special council Robert Mueller is investigating whether Trump attempted to obstruct justice.

Trump also announced Friday he was placing restrictions on travel and business with Cuba, in a partial reversal of Obama‘s previous policy. Earlier in the week a federal appeals court refused to revive his travel ban regarding six Muslim-majority nations.

Elsewhere, Britain’s post-election negotiations were put on hold after a huge fire swept through an apartment block in West London. So far 58 people have been confirmed dead but the number is expected to rise, with around 30 still unaccounted for.

Read more about the big news stories that dominated the week, as they appeared in The Daily Edition.

Top line: “A lone gunman who was said to be distraught over President Trump’s election opened fire on members of the Republican congressional baseball team at a practice field in this Washington suburb on Wednesday, using a rifle to shower the field with bullets that struck four people, including Steve Scalise, the majority whip of the House of Representatives.”

Top line: “President Donald Trump complained in a furious Friday morning tweet that he was being investigated for firing former FBI Director James Comey and seemed to accuse the deputy attorney general of overseeing a ‘witch hunt’ against him.”

Top line: “The special counsel overseeing the investigation into Russia’s role in the 2016 election is interviewing senior intelligence officials as part of a widening probe that now includes an examination of whether President Trump attempted to obstruct justice, officials said.”

Top line: “In a heated, often testy hearing of the Senate intelligence committee, Sessions refused to answer questions about his discussions with Donald Trump, on the grounds that the president could claim executive privilege over those discussions at a later date.”

Top line: “Speaking in Miami, Florida, he said his new policy would tighten rules affecting travel and on sending funds to the Caribbean island nation. But he is not reversing key diplomatic and commercial ties, and will not close the US embassy in Havana. Commercial flights from the US will continue, as will allowing Americans to return home with Cuban goods.”

Top line: “President Donald Trump suffered another legal setback on Monday as a second federal appeals court refused to revive his travel ban on people entering the United States from six Muslim-majority nations in a dispute headed to the U.S. Supreme Court.”

Top line: “The official response to the Grenfell Tower catastrophe ‘was not good enough’, the Prime Minister admitted last night as the death toll exceeded that of Britain’s worst fires since the war.”

Top line: “A Pennsylvania judge declared a mistrial Saturday in the case against Bill Cosby after a jury was unable to come to a unanimous decision, an inconclusive finale to one of the most high-profile sexual assault cases in years.”

Top line: “For the second time in three years, the Golden State Warriors are NBA champions. They defeated the Cleveland Cavaliers 129-120 in Game 5 of the 2017 NBA Finals on Monday.”

Top line: “An American college student who was released from a North Korean prison is finally home but in a coma and undergoing treatment at an Ohio hospital where he was taken shortly after arriving on U.S. soil.”