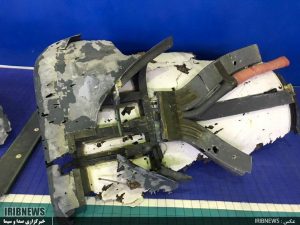 The purported wreckage of the American drone is seen displayed by the Islamic Revolution Guards Corps (IRGC) in Tehran, Iran June 21, 2019. Tasnim News Agency/Handout via REUTERS ATTENTION EDITORS – THIS IMAGE WAS PROVIDED BY A THIRD PARTY.

Tensions between the United States and Iran escalated this week. U.S. military planes were reportedly close to launching an attack before President Donald Trump called off the strike on Iran, which had earlier shot down an unmanned U.S. surveillance drone that they claim entered their airspace.

Trump also announced, then hit the pause button on, a nationwide immigration raid targeting an estimated 2,000 immigrant families, including those with U.S. citizen children.

Acting U.S. Defense Secretary Patrick M. Shanahan withdrew as Trump’s nominee to fill the position permanently. U.S. Secretary of the Army Mark Esper was tapped to replace him in the interim position.

There were two notable deaths this week: former Egyptian President Mohamed Morsi, who collapsed in court while facing trial after being ousted in 2013, and American heiress and fashion icon Gloria Vanderbilt.

And Facebook made waves by announcing a new digital cryptocurrency named Libra.

Top line: “U.S. President Donald Trump said on Saturday he would impose fresh sanctions on Iran but that he wanted to make a deal to bolster its flagging economy, an apparent move to defuse tensions following the shooting down of an unmanned U.S. drone this week by the Islamic Republic. On Thursday, an Iranian missile destroyed a U.S. Global Hawk surveillance drone, an incident that Washington said happened in international airspace. Trump later said he had called off a military strike to retaliate because it could have killed 150 people. Tehran repeated on Saturday that the drone was shot down over its territory and said it would respond firmly to any U.S. threat.”

Top line: “President Trump on Saturday delayed plans for nationwide raids to deport undocumented families, but he threatened to unleash Immigration and Customs Enforcement agents in two weeks if Democrats do not submit to changes in asylum law they have long opposed. The announcement, made on Twitter as Mr. Trump was meeting with aides at Camp David, was the president’s latest attempt to pressure his adversaries into making immigration changes. Last month, he threatened to levy tariffs on Mexico unless it did more to stop the flow of migrants into the United States. Immigration agents had been planning to sweep into several immigrant communities in 10 major cities — including Miami, Los Angeles, Baltimore and Chicago — beginning on Sunday. Officials said on Friday that they had targeted about 2,000 families in a show of force intended to demonstrate their strict enforcement of immigration laws.”

Top line: “Mohamed Morsi, Egypt’s first democratically elected president, collapsed in court and died Monday while facing trial, prompting supporters and human rights activists to demand an impartial probe into his death. A preliminary medical assessment found that Morsi, 67, showed signs of a possible heart attack or stroke, according to authorities and local media reports. He had been imprisoned since 2013, when his elected government was overthrown in a military coup led by the country’s then-military leader, Gen. Abdel Fatah al-Sissi, who is now president. As news of his death spread, a chorus of Morsi’s backers, allies and watchdog groups raised questions about his treatment in prison. The former president was known to have been suffering from several ailments, including diabetes and liver disease.” 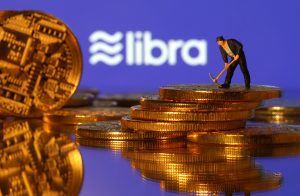 A small toy figure stands on representations of virtual currency in front of the Libra logo in this illustration picture, June 21, 2019. REUTERS/Dado Ruvic/Illustration

Top line: “Facebook Inc. unveiled plans for a new cryptocurrency called Libra this week. When it launches in 2020 or later, it will be a stablecoin–a digital currency that doesn’t fluctuate much because it’s supported by established government-backed currencies and securities. The world’s largest social media company published a 12-page white paper on Libra and has more than 20 partners for the project. But there are still many questions. After a week of analysis, here’s what Bloomberg reporters and editors know about Libra, along with key unknowns that remain.”

Top line: “President Donald Trump pulled the plug Tuesday on his acting defense secretary’s long-stalled nomination to lead the Pentagon — culminating a period of limbo that included questions about Pat Shanahan’s fitness for the job, his ties to his former employer Boeing and a nearly decade-old allegation of domestic violence. Shanahan subsequently announced that he is stepping down as deputy defense secretary. And he took a swipe at recent media attention on his family’s troubled history, which included a 2010 incident in which his then-wife was arrested after each reported being struck by the other.” 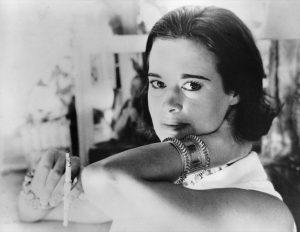 Top line: “Gloria Vanderbilt died Monday morning, according to her son, CNN’s Anderson Cooper. The fashion designer, artist and socialite was 95. She died in her Manhattan home with friends and family at her side. “Gloria Vanderbilt was an extraordinary woman, who loved life, and lived it on her own terms,” Cooper said in a statement. “She was a painter, a writer and designer but also a remarkable mother, wife, and friend. She was 95 years old, but ask anyone close to her, and they’d tell you: She was the youngest person they knew — the coolest and most modern.” Vanderbilt was diagnosed with an advanced form of stomach cancer earlier this month, Cooper said.”” 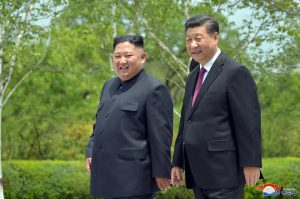 Chinese President Xi Jinping and North Korean leader Kim Jong Un walk during Xi’s visit in Pyongyang, North Korea in this picture released by by North Korea’s Korean Central News Agency (KCNA) on June 21, 2019. KCNA via REUTERS ATTENTION EDITORS – THIS IMAGE WAS PROVIDED BY A THIRD PARTY. REUTERS IS UNABLE TO INDEPENDENTLY VERIFY THIS IMAGE. NO THIRD PARTY SALES. SOUTH KOREA OUT. NO COMMERCIAL OR EDITORIAL SALES IN SOUTH KOREA.

Top line: “Xi Jinping and Kim Jong-un have held talks at the start of the Chinese president’s trip to North Korea, rebooting a troubled alliance as the pair face their own challenges from Donald Trump. Xi’s two-day visit is the first by a Chinese leader to North Korea in 14 years, after relations between the cold war-era allies deteriorated over Pyongyang’s nuclear provocations and Beijing’s subsequent backing of UN sanctions. Xinhua did not provide details, but North Korea’s nuclear programme is expected to top the agenda, months after Kim’s second denuclearisation summit with Trump ended in failure.”

Top line: “Amid scientists’ increasingly urgent warnings, the Trump administration ordered a sweeping about-face Wednesday on Obama-era efforts to fight climate change, easing restrictions on coal-fired power plants in a move it predicted would revitalize America’s sagging coal industry. The EPA move follows pledges by candidate and then President Donald Trump to rescue the U.S. coal industry, which saw near-record numbers of plant closings last year in the face of competition from cheaper natural gas and renewables. It’s the latest and one of the biggest of dozens of environmental regulatory rollbacks by his administration. It came despite scientists’ cautions that the world must cut fossil fuel emissions to stave off the worst of global warming and the EPA’s own analysis that the new rule would result in the deaths of an extra 300 to 1,500 people each year by 2030 compared to the never fully enacted Clean Power Plan, owing to additional air pollution from the power grid.”

Top line: “Investigators have identified four people they say were responsible for the rocket attack that downed Malaysia Airlines Flight 17 over eastern Ukraine in 2014. At a press conference Wednesday, an international joint investigation team said that murder charges would be brought against them in the Netherlands. This is the latest result of a criminal investigation that in 2016 revealed the plane was shot down by a Russian-made Cold War rocket launcher from an area of Ukraine then controlled by Russian forces.”

Top line: “Argentina is investigating what caused a massive power cut that hit nearly 50 million people. President Mauricio Macri called the outage “unprecedented”, promising a thorough inquiry. Almost all of Argentina, neighbouring Uruguay and some areas of Paraguay woke up to darkness on Sunday. The disruption hit public transport while hospitals were forced to run on generators. Power had largely been restored by the end of the day. Argentine officials said it began with a failure in the country’s “interconnection system” but that the exact cause was unknown. Energy Minister Gustavo Lopetegui said it was unlikely that a cyber-attack was responsible, and that it would take 10-15 days for the results of the investigation to be published.”