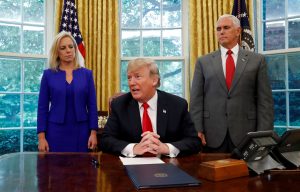 U.S. President Donald Trump speaks to reporters about signing an executive order on immigration policy with DHS Secretary Kirstjen Nielsen and Vice President Mike Pence at his sides in the Oval Office of the White House in Washington, U.S., June 20, 2018. (REUTERS/Leah Millis)

After international and bipartisan outcry over his “zero tolerance” policy that separated migrant parents and children at the U.S.-Mexico border, President Donald Trump signed an executive order halting family separations and detaining them together until the end of migrant proceedings.

The United States withdrew its membership in the United Nations Human Rights Council, citing the group’s ongoing criticism of Israel’s treatment of Palestinians. The move — the first willing departure of an original member state — also occurred on the heels of the council’s criticism of the U.S. for its treatment of immigrants.

President Trump also ordered the Pentagon to create a U.S. Space Force — a new branch of the military — to defend American “national security” interests in space.

Pulitzer Prize-winning newspaper columnist and conservative commentator Charles Krauthammer died at the age of 68 of intestinal cancer. And the Supreme Court declined to rule on two cases challenging state practices of partisan gerrymandering, sending them back to lower courts.

In business news, the European Union instituted retaliatory tariffs on €2.8 billion euros worth of U.S. imports, in response to U.S. steel and aluminum tariffs on the EU. Disney outbid Comcast for 21st Century Fox with a $71.3 billion offer in cash and stock. And General Electric was dropped from the Dow Jones Industrial Average and replaced by Walgreens.

Top line: “President Donald Trump on Wednesday reversed course after days of digging in on a policy that resulted in immigrant family separations at the border, signing an executive order that will keep far more families together at the border. The order also seeks more authority to detain those families together until the end of their immigration proceedings. That process will begin immediately, which is likely to be met with swift legal challenges, though the order does acknowledge that current law may restrict their hands.”

Magazine to follow: Separation of Families at the U.S. Southern Border by NPR 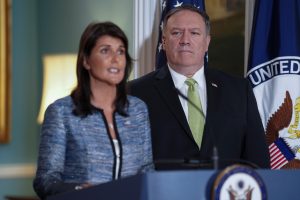 U.S. Ambassador to the United Nations Nikki Haley delivers remarks to the press together with U.S. Secretary of State Mike Pompeo, announcing the U.S.’s withdrawal from the U.N’s Human Rights Council at the Department of State in Washington, U.S., June 19, 2018. (REUTERS/Toya Sarno Jordan)

Top line: “The United States withdrew on Tuesday from the world’s most important human rights body in protest of its frequent criticism of Israel’s treatment of Palestinians. It was the latest effort by the Trump administration to pull away from international organizations and agreements that it finds objectionable. It was the first time a member has voluntarily left the United Nations Human Rights Council. The United States now joins Iran, North Korea and Eritrea as the only countries that refuse to participate in the council’s meetings and deliberations.”

Top line: “Charles Krauthammer, a Pulitzer Prize-winning Washington Post columnist and intellectual provocateur who championed the muscular foreign policy of neoconservatism that helped lay the ideological groundwork for the 2003 U.S.-led invasion of Iraq, died June 21 at 68. The cause was cancer of the small intestine, said his son, Daniel Krauthammer. He declined to provide further information.”

Top line: “President Donald Trump on Monday ordered the Pentagon to establish a stand-alone Space Force as a new branch of the armed forces. He also asked Joint Chiefs Chairman Gen. Joseph Dunford to carry out the process of standing up the new military service. The move quickly drew some backlash from one key senator, who said the president was overstepping his bounds by unilaterally calling for the creation of a new military service.”

5. EU tariffs on US goods come into force – BBC News

Top line: “The European Union (EU) has introduced retaliatory tariffs on US goods as a top official launched a fresh attack on President Donald Trump’s trade policy. The duties on €2.8bn (£2.4bn) worth of US goods came into force on Friday. Tariffs have been imposed on products such as bourbon whiskey, motorcycles and orange juice.” 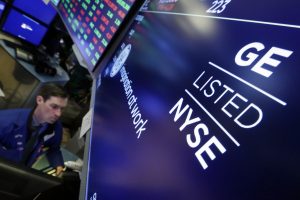 Specialist John McNierney works at the post that handles General Electric on the floor of the New York Stock Exchange, Tuesday, Jan. 16, 2018. GE CEO John Flannery, who was put in charge of reviving the company last summer, revealed significant issues at GE Capital on Tuesday, which will lead to a $6.2 billion after-tax charge in the fourth quarter. (AP Photo/Richard Drew)

Top line: “General Electric Co. suffered a crowning ignominy Tuesday as overseers of the Dow Jones Industrial Average kicked the beleaguered company out of the stock gauge it has inhabited for more than a century. Once the world’s most valuable company, GE will be replaced by Walgreens Boots Alliance Inc., the Deerfield, Illinois-based drugstore chain created in a 2014 merger. The change will take effect prior to the open of trading next Tuesday. Down 26 percent, GE is the worst performer in the Dow in 2018, as it was last year, as well.”

Top line: “Today Instagram announced that it has reached 1 billion monthly active users, after passing 800 million in September 2017 with 500 million daily users. That massive audience could be a powerful draw for IGTV, the longer-form video hub it’s launching for creators today. While IGTV monetization options are expected in the future, content makers may flock to it early just to get exposure and build their fan base.”

Top line: “The U.S. Supreme Court punted Monday on its biggest decision of its term so far. The justices had been expected to rule on the limits of partisan gerrymandering. Instead, the court sidestepped the major issues on technical grounds, sending the issue back to the lower courts for further examination. The two cases before the court illustrate the bare-knuckles practice both parties have used to maximize and perpetuate their own power through the re-drawing of legislative district lines.”

Top line: Argentina are on the brink of disaster, while Spain, France, and England—yes, England—can start dreaming of the knockout stages. We’re a week into the World Cup! So, it’s time to check in on our pre-tournament top 10 and rank them in order of who we’re feeling best about and worst about.”

~HeatherC is reading about Profiles In Peace by GU Women & Peace