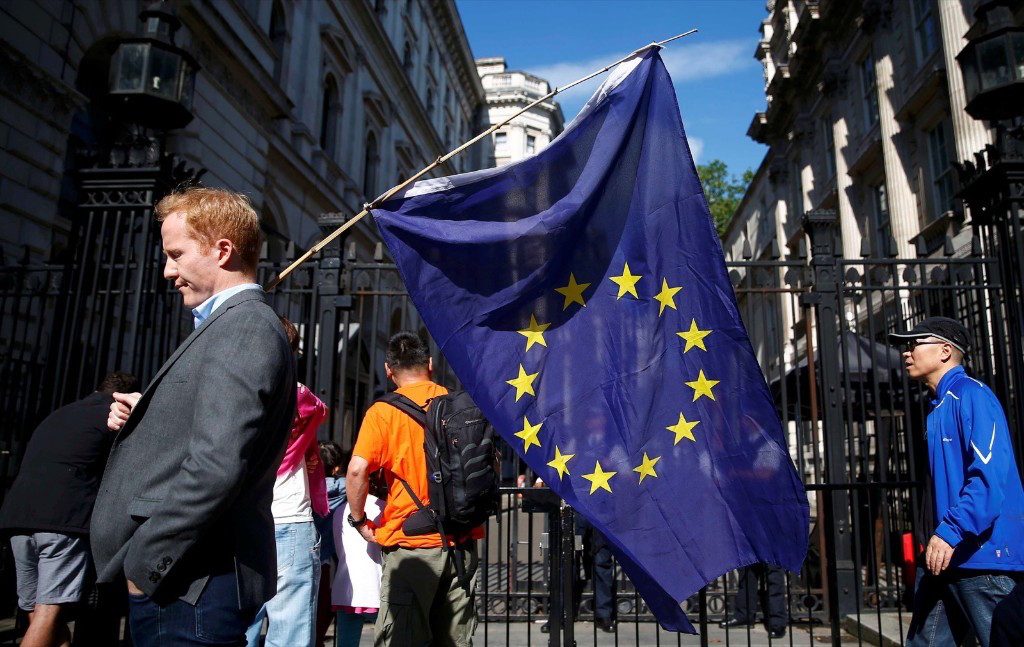 A man carries an EU flag outside Downing Street after Britain voted to leave the European Union. REUTERS/Neil Hall

This week culminated in the U.K.’s historic decision to leave the European Union, which caused Prime Minister David Cameron to announce he will step down from his office and global markets to decline. The surprising outcome followed a week of dramatic politics in the U.S. as Democratic members of Congress staged a sit-in on the House floor to draw attention to gun control, the Supreme Court ruled on immigration and affirmative action and Donald Trump fired his campaign manager, Corey Lewandowski. Get caught up on some of the biggest stories of the week, as they appeared in The Daily Edition.

Top line: “Britain has voted to leave the European Union in a historic referendum that forced the country’s prime minister to step down, upended markets and set the stage for a messy untangling with far-reaching implications…The vote served as an indictment of Britain’s government and a barometer of domestic fears about immigration and the economy.”

Top line: “He would attempt to “steady the ship” over the coming weeks and months, but that it would be for the new prime minister to carry out negotiations with the EU and invoke Article 50 of the Lisbon Treaty, which would give the UK two years to negotiate its withdrawal, he said.

Top line: “The tactics were more dramatic, a 25-hour siege by House Democrats. The words were more urgent, as Senators debated a compromise offered by a Republican. But by day’s end on Thursday, Congress was in the same place: a fierce stalemate over the nation’s gun laws, even with the additional pressure from the mass shooting in Orlando, Fla…In the House, Democrats on Thursday ended their 25-hour sit-in — a protest Speaker Paul D. Ryan called a high-profile stunt that undermined the basic institutions of government.” 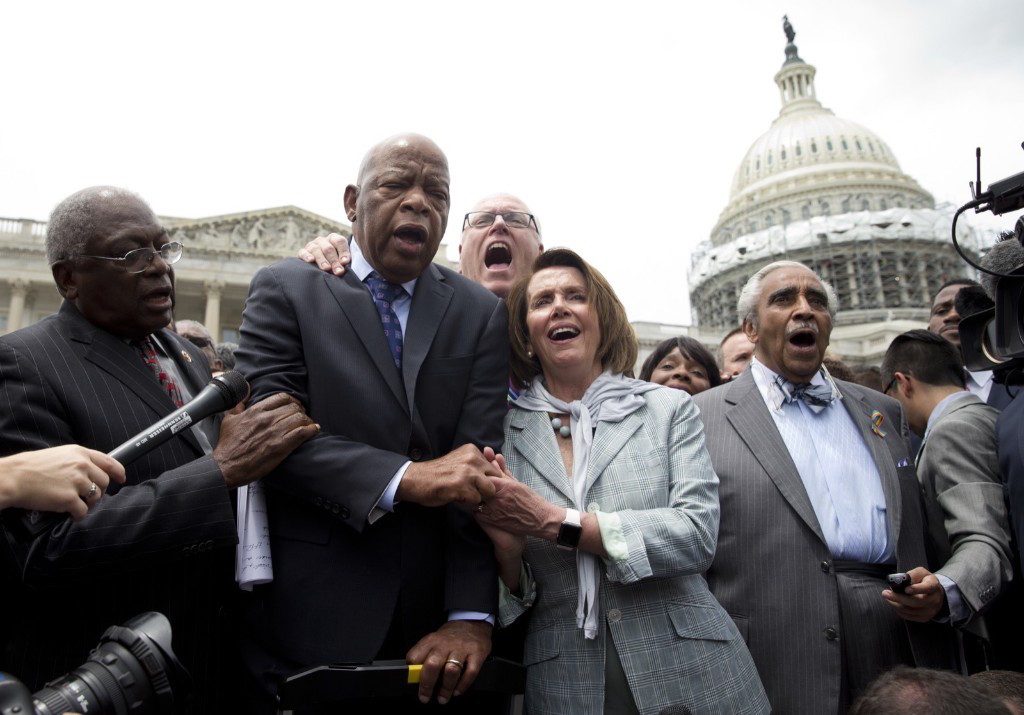 Top line: “The Supreme Court dealt a likely fatal blow Thursday to President Obama’s effort to protect millions of undocumented immigrants from deportation and allow them to seek work permits, deadlocking 4-4 over a plan that had divided the nation as well as the justices. The tie vote leaves intact a preliminary injunction that stopped the program in its tracks more than a year ago, after Texas and 25 other states claimed Obama lacked the authority to circumvent Congress. While the case now will return to Texas for further review, it’s unlikely the lower federal courts that blocked the program will reverse themselves.” 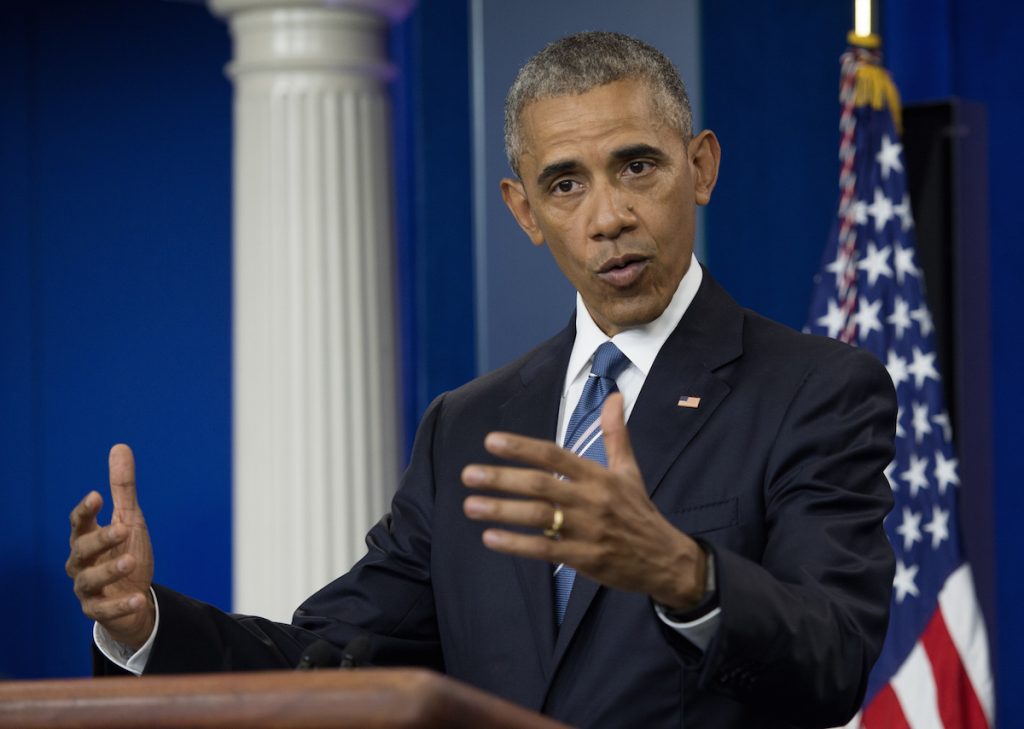 President Barack Obama speaks in briefing room in Washington, D.C., U.S., on Thursday, June 23, 2016 after the Supreme Court divided evenly over Obama’s plan to shield as many as 4 million unauthorized immigrants from deportation. Molly Riley/Pool via Bloomberg

Top line: “The FBI reversed direction Monday and released the full transcript of the 911 call Orlando massacre shooter Omar Mateen made while in the midst of shooting-up the Pulse nightclub…In it, both Mateen and the ISIS leader to whom he pledged allegiance, Abu Bakr al-Baghdadi, are named.”

Top line: “Corey Lewandowski has been fired as Donald Trump’s campaign manager, ending the tenure of the fiery operative who faced a steady string of controversies while guiding Trump’s skeleton campaign operation to a shocking victory in the 2016 Republican presidential primary.”

Top line: “Baltimore police officer Caesar Goodson, who drove the van in which Freddie Gray was fatally injured, was found not guilty Thursday on all charges, including the most serious count of second-degree depraved-heart murder…Gray, who was 25, suffered a devastating spinal injury and died in April 2015, about a week after he was arrested and placed into a prisoner van. Though Gray’s death became a symbol of the black community’s distrust of police and triggered days of violent protests, the state has failed to secure a single conviction following three high-profile trials.”

Top line: “The heavy rains that pummeled West Virginia resulted in at least 23 deaths, leaving families homeless with the tearful realization that they’re starting from scratch.”

Top line: “Sen. Marco Rubio said Wednesday he will seek reelection to the Senate, reversing a pledge he made a year ago to either assume the presidency or return to private life in Florida. The decision instantly transforms an already competitive race and improves Republicans’ chances of maintaining the Senate majority.

Rubio (R-Fla.) issued a lengthy statement explaining his decision to reverse course, citing the Senate’s power to ‘act as a check and balance on the excesses of a president’ as a central reason.” 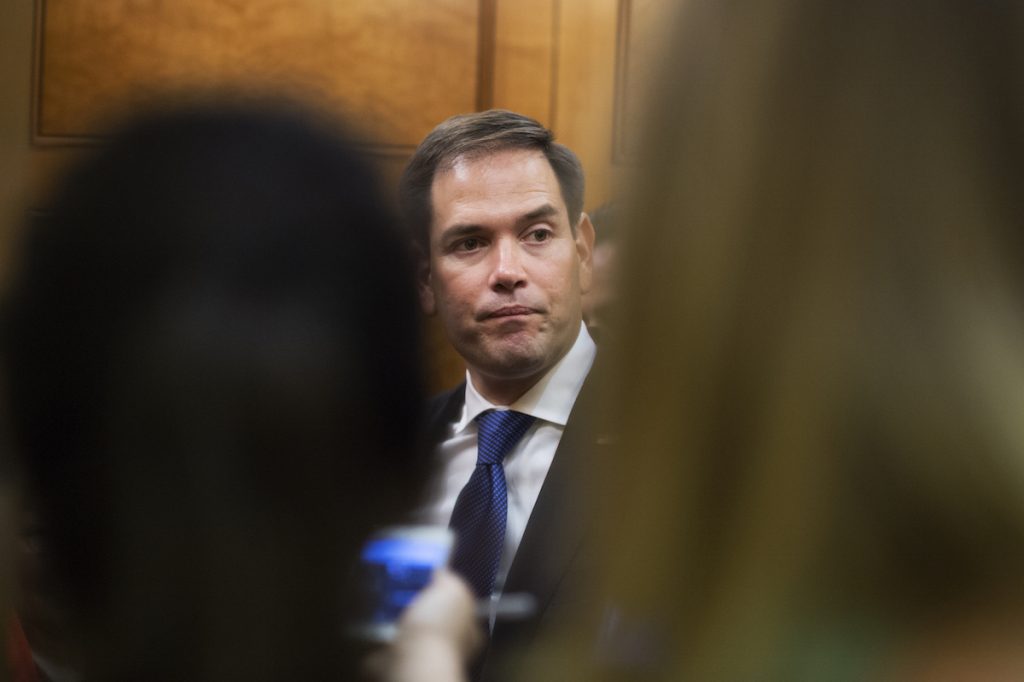 Sen. Marco Rubio, R-Fla., talks with reporters in the basement of the Capitol before the Senate Policy luncheons, June 21, 2016. Photo By Tom Williams/CQ Roll Call

Top line: “North Korea fired two missiles Wednesday morning from its eastern coast, according to South Korean and U.S. officials…The first missile flew 93 miles (150 kilometers), and is considered a failed launch, according to a South Korean military official. The second missile traveled 249 miles (400 kilometers) and the data is still being analyzed by the South Korean military, the official told CNN. North Korea has made at least four previous attempts this year to test this type of missile.”