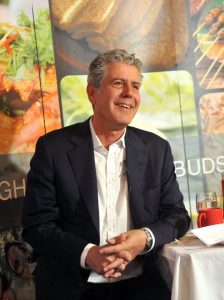 Anthony Bourdain in Singapore in 2012. Diane Bondareff/AP Images for Singapore Tourism Board

The week began and ended on a sombre note, with the passing of celebrity chef Anthony Bourdain, 61, and fashion designer Kate Spade, 55. Both deaths were ruled apparent suicide. Tributes poured in from the world over for much-loved celebrities. Their passing also opened a dialogue on the issue of depression, a crucial conversation as suicide rates rise sharply across the U.S.

On the political front, eight states voted in the biggest primary night of the year, and President Trump commuted the life sentence of Alice Marie Johnson, a nonviolent drug offender.

A new indictment was filed against Paul Manafort, Trump’s former campaign chairman, and  Konstantin Kilimnik, a longtime Manafort aide, alleged to have ties to Russian intelligence.

NASA announced the significant discovery of organic molecules on Mars, and Apple introduced massive updates at their annual developers’ conference.

Overseas, a volcanic eruption in Guatemala claimed the lives of over 100 people and left hundred others missing or stranded. The search and rescue operations were halted due to climatic conditions.

And, the Capitals beat the Golden Knights 4-3, to win the Stanley Cup for the first time in the club’s 44-year history. 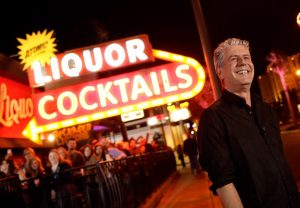 Top line: “In death, as in life, Anthony Bourdain brought us closer together. On his award-winning series, “Parts Unknown,” Bourdain brought the world home to CNN viewers. Through the simple act of sharing meals, he showcased both the extraordinary diversity of cultures and cuisines, yet how much we all have in common. Tragically, he proved this again on Friday. Bourdain’s death shook television viewers around the world. The most common sentiment: “I feel like I’ve lost a friend.”’ 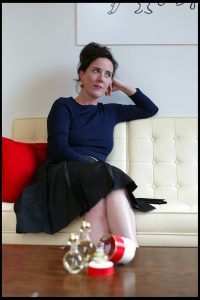 Kate Spade at her office in 2002. David Howells/Corbis via Getty Images

Top line: “Buying a Kate Spade handbag was a coming-of-age ritual for a generation of American women. The designer created an accessories empire that helped define the look of an era. The purses she made became a status symbol and a token of adulthood. Ms. Spade, who was found dead on Tuesday in what police characterized as a suicide by hanging, worked as an editor before making the leap to designing, constructing her first sketches from paper and Scotch tape. She would come to attach her name to a bounty of products, and ideas: home goods and china and towels and so much else, all of it poised atop the thin line between accessibility and luxury.” 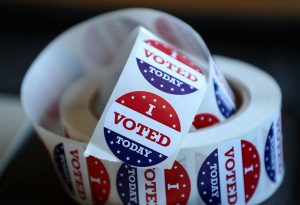 SAN ANSELMO, CA – JUNE 05: A roll of “I Voted” stickers sit on a table inside a polling station at a Ross Valley fire station on June 5, 2018 in San Anselmo, California. California voters are heading to the polls to vote in the primary election. (Photo by Justin Sullivan/Getty Images)

3. Winners and losers from the biggest primary night of the year – The Washington Post, Amber Phillips

Top line: “It was a pivotal night for Democrats trying to nominate the right candidates to retake the majority in the House of Representatives. Here are the winners and losers from the eight-state primary swing on Tuesday.” 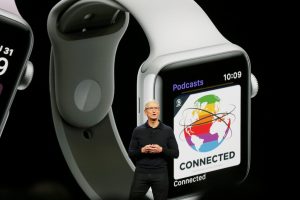 Top line: “Apple kickstarted its annual WWDC event today with a keynote led by CEO Tim Cook, where he introduced all the latest updates for iOS 12 and the new macOS. The keynote this year comes off of a quieter season for Apple. The company just had a press event back in March for its educational iPad launch in the midst of strong iPhone sales but unfavorable news cycles around HomePods leaving ring marks on wooden tables, defective MacBook Pro keyboards, and the fallout since confirming that it throttled iPhone speeds for depreciating batteries.” 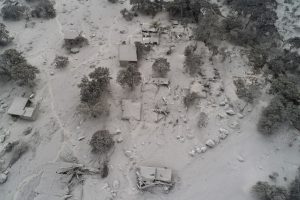 Rescue workers search in one of the hamlets in the disaster area near the Volcan de Fuego, or Volcano of Fire, in Escuintla, Guatemala. The fiery volcanic eruption in south-central Guatemala killed scores as rescuers struggled to reach people where homes and roads were charred and blanketed with ash. AP Photo/Rodrigo Abd

Top line: “Rescuers suspended search and recovery efforts Thursday at villages devastated by the eruption of Guatemala’s Volcano of Fire, leaving people with missing loved ones distraught and prompting some to do the risky work themselves with rudimentary tools. Conred, the national disaster agency, said climatic conditions and still-hot volcanic material were making it dangerous for rescuers, and it was also taking into account the fact that 72 hours had passed since Sunday’s eruption. That’s the window beyond which officials earlier said it would be extremely unlikely to find any survivors amid the ash, mud and other debris that buried homes up to their rooftops.”

Top line: “Movie mogul Harvey Weinstein Tuesday pleaded not guilty to two rape charges and a criminal sex act charge in a New York City courtroom. Weinstein, 66, wearing a dark blue suit, white shirt and dark tie, answered “not guilty” in a soft voice when asked how he pleaded to the indictment by a Manhattan grand jury last week.”

Top line: “For the first time, scientists say they have clear evidence that the chemical building blocks of life exist on Mars. What they can’t say yet is whether there is, or ever was, life on the Red Planet. The new evidence comes from a pair of rocks. NASA’s six-wheeled Curiosity rover drilled into the planet in late 2014 and early 2015. The two rock samples, from sites named Confidence Hills and Mojave, are at the bottom of Gale Crater.” 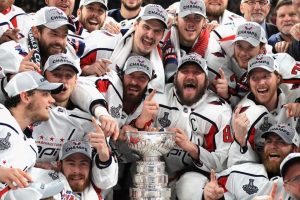 The Washington Capitals celebrate with the Stanley Cup after they defeated the Vegas Golden Knights four games to one. It is the first title in Capitals’ history. Dave Sandford/NHLI via Getty Images

Top line: “There is also no doubt that Thursday ushered the shotgun start for a citywide purge and binge of emotions … in that order. When the Capitals flung their helmets skyward and tore from the bench upon beating the Golden Knights, 4-3, more than four decades of franchise-wide frustration evaporated. Then–mercifully, thankfully, finally–it was time to be free. So they screamed and sang, hugged and held Lord Stanley aloft, smooching the spots where their names will soon be stamped. Owner Ted Leonsis shuffled around the ice, misty-eyed and snapping selfies to memorialize Washington’s first major pro sports title since 1992.”

~SonaliK is reading 99 Days of Summer by Well+Good