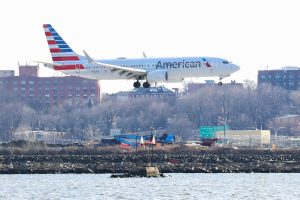 An American Airlines Boeing 737 Max 8, on a flight from Miami to New York City, comes in for landing at LaGuardia Airport in New York, U.S., March 12, 2019. (REUTERS/Shannon Stapleton)

Beto O’Rourke has joined the 2020 presidential race. The former Texas congressman still has momentum from his challenge to incumbent Republican Senator Ted Cruz, giving the 46-year-old national name-recognition in a packed slate of Democratic Party contenders. Whoever wins the party’s nomination will be announced at the Democratic National Convention, to be held in Milwaukee.

A deadly plane crash in Ethiopia killed 157 people from around the world—an international tragedy that sparked a global response against U.S.-based aerospace giant, Boeing, whose 737 Max 8 line of commercial jets were involved. This was its second crash in five months. Dozens of nations grounded all related Boeing planes, but the U.S. held out for days. An investigation is ongoing.

The worlds of academia, Hollywood, parenting, sports, business and corruption collided in this week’s revelation of the country’s largest college admissions scam. Celebrities, CEOs and athletic coaches face federal conspiracy and fraud charges for falsifying exam scores and more to get their children into some of the country’s top colleges.

The Republican-controlled Senate voted against two of President Donald Trump’s immovable stances: first, they called for an end to U.S. military involvement in Saudi Arabia’s war in Yemen, and then they joined Democrats in seeking to overturn Trump’s national emergency declaration, which was made to divert federal funds towards border wall construction. Trump has promised to use his veto power in response.

In business news, Facebook lost two top executives in Chief Product Officer Chris Cox and VP of WhatsApp Chris Daniels. And gun manufacturer Remington can be sued by the families of those killed at Sandy Hook Elementary School, according to the Connecticut Supreme Court.

In international news, the British Parliament voted against Prime Minister Theresa May’s Brexit deal for a second time, also voted against leaving the European Union without a deal, then voted to postpone their planned exit for three months in order to buy time to create a new plan.

And in New Zealand, a terrorist attack killed at least 49 people and injured 40 more. The mass shooting at two mosques was live-streamed online by the attackers, who allegedly released a manifesto expressing sympathy for anti-immigrant movements in the U.S. and elsewhere. 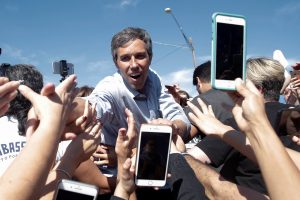 Top line: “Former Texas Rep. Beto O’Rourke is running for president, hoping to build on the momentum the Democrat generated in a Senate contest last year. O’Rourke is in Iowa for three days of campaigning. He’s also planning a campaign rally in El Paso on March 30. The 46-year-old mounted a stronger-than-expected challenge to Republican Sen. Ted Cruz last November, coming within 3 points of victory in the deep red state. He raised about $80 million for his bid, most of it from small-dollar donations, and amassed a nationwide grassroots following while eschewing traditional campaign methods.”

2. Why has Boeing pulled its 737 Max fleet – and what took it so long? – The Guardian, Matthew Weaver, Gwyn Topham

Top line: “Donald Trump grounded Boeing’s 737 Max fleet on Wednesday, days after the second fatal crash involving the plane in five months led to governments around the world – but initially not the US – suspending their use of the plane. Boeing then decided to pull its entire fleet of 737 Maxes worldwide. What do we know about the crisis so far?” 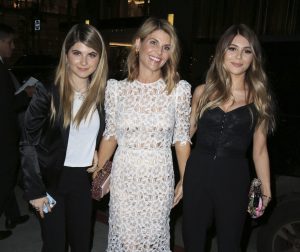 3. What we know so far in the college admissions cheating scandal – CNN, Holly Yan

Top line: “The massive college admissions scam, thought to be the biggest ever prosecuted in the United States, is a harsh reminder that wealthy families can cheat their way to even greater privilege. And some say this scandal is just the tip of the iceberg. Here’s what we know so far in this developing case.”

Top line: “The U.S. Senate on Thursday rebuked President Donald Trump by voting to end his border emergency declaration, as 12 Republicans joined Democrats to deliver a second blow in as many days to the president, who quickly pledged a veto. The 59-41 vote was a bipartisan repudiation of Trump’s decision to circumvent Congress and take money already designated for other programs and redirect it to pay for his U.S.-Mexico border wall, which he promised to build during his 2016 campaign. “VETO!” he tweeted shortly after the vote. The vote on Thursday marked back-to-back defeats for Trump in the Republican-controlled Senate. On Wednesday, senators approved a resolution seeking to end U.S. support for a Saudi Arabia-led coalition in the war in Yemen, rejecting Trump’s policy toward the kingdom.” 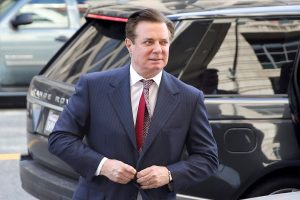 Top line: “New York prosecutors Wednesday announced criminal charges against President Donald Trump‘s former campaign chief, Paul Manafort, only minutes after his sentencing in a federal case. The indictment, unveiled by Manhattan District Attorney Cy Vance, charges Manafort with 16 counts related to mortgage fraud, conspiracy and falsifying business records. Crucially, Trump does not have pardon power for state charges. The president has not explicitly ruled out pardoning his former campaign official. But Trump has lambasted special counsel Robert Mueller’s Russia probe as a “witch hunt,” and in recent days has appeared to criticize investigations in New York related to his business empire.”

Top line: “13-year Facebook veteran, Chief Product Officer, and the spirit animal of the social network Chris Cox is departing the company after two years of seeking to do something new. Cox’s exit is part of a big executive reshuffle as Facebook embarks on prioritizing privacy through messaging, groups, Stories, and backend unification of its chat features. Cox bowing out after so long is understandable, but more surprising is today’s departure of Chris Daniels, an 8-year employee who was moved from being head of Internet.org to VP of WhatsApp just last May in a major re-org. The changes solidify that Facebook is entering a new era as it chases the trend of feed sharing giving way to private communication.”

Top line: “Gun-maker Remington can be sued over how it marketed the rifle used to kill 20 children and six educators at Sandy Hook Elementary School in 2012, a divided Connecticut Supreme Court ruled Thursday. Gun control advocates touted the ruling as providing a possible roadmap for victims of other mass shootings to circumvent a long-criticized federal law that shields gun manufacturers from liability in most cases when their products are used in crimes. Gun rights supporters bashed the decision as judicial activism and overreach. In a 4-3 decision, justices reinstated a wrongful death lawsuit against Remington and overturned the ruling of a lower court judge, who said the entire lawsuit was prohibited by the 2005 federal law. The majority said that while most of the lawsuit’s claims were barred by the federal law, Remington could still be sued for alleged wrongful marketing under Connecticut law.”

Top line: “Democrats are going all in on the heartland. On Monday, the Democratic National Committee announced it had selected Milwaukee, Wisconsin to host its 2020 presidential convention, a move that offers real and symbolic significance after Hillary Clinton skipped the state in the 2016 presidential race, then went on to lose it to President Donald Trump. Milwaukee beat out Houston and Miami. Wisconsin has embodied the party’s failures in the 2016 presidential race. Clinton felt so confident in capturing a state that Barack Obama had claimed that she bypassed it in the general election campaign. Trump then won it by less than 25,000 votes, the first time the state had gone red in a presidential contest since 1984.”

Top line: “Forty-nine people have been killed and at least 20 wounded in shootings at two mosques in Christchurch, New Zealand. Prime Minister Jacinda Ardern described the incident as a terrorist attack and one of New Zealand’s “darkest days”. It is the nation’s deadliest attack. A gunman identifying himself as an Australian live-streamed the rampage at Al Noor mosque to Facebook. A man in his late 20s has been arrested and charged with murder. Two other men and one woman were also detained. Firearms and explosive devices were recovered, Police Commissioner Mike Bush said. One of those detained was later released. The suspect who was charged appeared to have published a document before the attack outlining his intentions and in which he espoused far right and anti-immigrant ideology. He is due in court on Saturday morning.”

Top line: “British lawmakers voted Thursday to seek to delay Brexit — maybe for weeks, maybe for months — after Prime Minister Theresa May’s plans for leaving the European Union have been repeatedly rejected by a raucous Parliament trying to wrest control from her. Since becoming prime minister, May had insisted that “Brexit means Brexit,” that she would negotiate a good deal and that Britain would leave the European Union on March 29, 2019. The March date was a deadline the prime minister herself triggered when she — alongside the British Parliament — initiated Article 50 in the E.U. treaty two years ago. Now Britain almost certainly will not leave the European Union in two weeks — unless E.U. leaders reject its request for an extension and it crashes out with no deal. The vote to delay Brexit passed 412 to 202.”