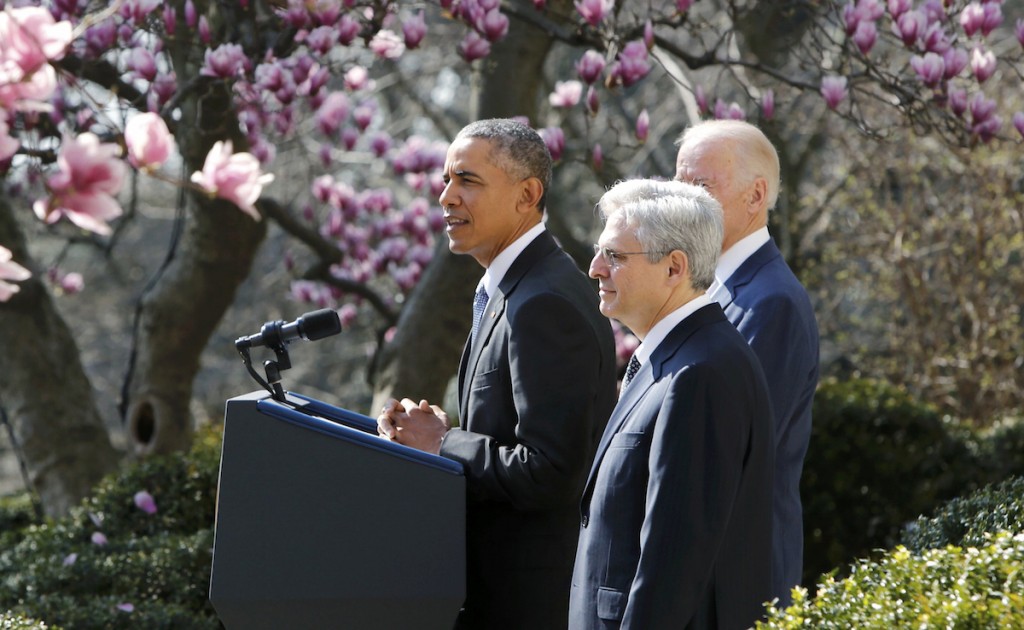 This week was filled with changing dynamics in U.S. politics and on the world stage. President Barack Obama nominated Merrick Garland to the U.S. Supreme Court, setting up a battle in Washington and Super Tuesday 3 ended with big wins for Donald Trump and Hillary Clinton and Marco Rubio‘s departure from the 2016 presidential race. Russian President Vladimir Putin announced his withdrawal from Syria and the Paris terror suspect was taken into custody in Brussels. And of course March Madness is in full swing. Read the biggest stories of the week, as they appeared in The Daily Edition.

Top line: “The president officially named Garland as a Supreme Court nominee Wednesday as they stood before the media and a large gathering of attendees in the Rose Garden at the White House…’This is the greatest honor of my life, other than Lynn agreeing to marry me 28 years ago,’ Garland said, growing emotional and pointing to his wife. ‘As my parents taught me by both words and deeds,’ Garland said, ‘a life of public service is as much a gift to the person who serves as it is to those he is serving. And for me, there could be no higher public service than serving as a member of the United States Supreme Court.'”

Top line: “The Russian president, Vladimir Putin, has abruptly declared that he is withdrawing the majority of Russian troops from Syria, saying the six-month military intervention had largely achieved its objective…His move was clearly designed to coincide with the start of Syrian peace talks in Geneva and will be seen as a sign that Russia believes it has done enough to protect Assad’s regime from collapse.”

Top line: “Police in Brussels cornered and wounded the last Paris attacker known to have survived the Nov.13 assault on Friday, ending Europe’s biggest manhunt in years, but also raising troubling questions about whether a plot for another terror attack was in the works.”

Top line: “In the latest violence, a Kurdish rebel group on Thursday claimed responsibility for a car bomb attack that killed at least 37 people earlier this week in the capital. The Kurdistan Freedom Falcons, or TAK — an offshoot of the Kurdish separatist group PKK — said on its website that militants struck Sunday ‘in the heart of (the) fascist Turkish republic.'”

6. Wichita State is back; Miami and rest of NCAA tournament field has been warned—The Washington Post, Chuck Culpepper

Top line: “Migrants were given a one-day deadline to reach Europe as leaders announced anyone landing in Greece after midnight on Saturday would be swiftly deported. A deadly scramble for the last boats over the Aegean to the Greek islands began after a €6 billion (£2.3 billion) aid-for-deportations deal with Turkey was agreed in Brussels. Turkish police on Friday intercepted 3,000 migrants attempting to cross on land and sea in a major operation involving coast guard and helicopters, as Ankara at last showed a willingness to halt the human tide.”

Top line: “The Boeing 737-800 operated by FlyDubai was carrying 55 passengers, most of them Russian, and seven crew members of various nationalities when it crashed Saturday in the city of Rostov-on-Don while trying to land in strong winds. Russia’s Emergencies Ministry said there were no survivors. Four children were among those killed, FlyDubai said.”

Top line: “Both the so-called Islamic State (IS) and Kurdish militants have claimed recent attacks in Turkey. President Recep Tayyip Erdogan has said terror groups are targeting civilians because they are losing their struggle against Turkish security forces. Turkey is part of the US-led coalition against IS and allows coalition planes to use its air base at Incirlik for raids on Iraq and Syria.”

Top line: “North Korea ignored U.N. resolutions by firing a medium-range ballistic missile into the sea on Friday, Seoul and Washington officials said, days after its leader Kim Jong Un ordered weapons tests linked to its pursuit of a long-range nuclear missile capable of reaching the U.S. mainland….A senior U.S. defense official said the missile appeared to be a Rodong type fired from a road-mobile launcher. The test violated multiple U.N. Security Council resolutions that ban North Korea from engaging in any ballistic and nuclear activities, said the official, speaking on condition of anonymity because he was not authorized to discuss the matter publicly.”