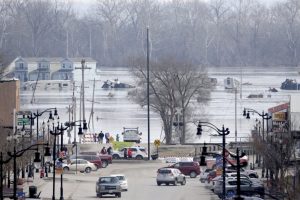 The rising waters from the Platte and Missouri rivers which flooded areas of Plattsmouth, Neb. AP Photo/Nati Harnik

Historic levels of flooding devastated Nebraska, killing four, and destroyed infrastructure and entire communities. A federal disaster has been declared. Now more Midwest states are preparing for the flooding to move downstream as spring rains and snowmelt add to the rising water levels.

President Donald Trump declared that the United States should recognize Israel’s sovereignty over the Golan Heights, land that they seized from Syria decades ago. The policy shift sparked outrage from the Syrian government, and comes as Israeli Prime Minister Benjamin Netanyahu prepares to visit the U.S. and face a re-election campaign while facing corruption charges.

In business news, Disney became a bigger media giant with the closure of its $71.3 billion acquisition of 21st Century Fox assets, Warner Bros. CEO Kevin Tsujihara resigned following an investigation into allegations he tried to get work for a British actress he was having an affair with, and Boeing’s troubles continued as the FBI and Justice Department joined a growing criminal investigation into their business, safety, and pilot training practices and guidelines.

Disaster also struck southern Africa, devastating Malawi, Zimbabwe and Mozambique, where hundreds were killed when Cyclone Idai made landfall. And in the Netherlands, a shooter killed three commuters on a tram in the city of Utrecht, sparking a manhunt, his arrest, and terrorism charges.

Top line: “Gov. Kim Reynolds is warning Iowans what millions of Midwesterners have come to understand in recent days – the severe flooding that has swamped much of the region may be a long way from over. Reynolds said the snowmelt and spring rains could create additional flooding in the weeks ahead because of compromised levees. In neighboring Nebraska, 88 cities and 74 counties have issued emergency declarations. Vice President Mike Pence visited the state Tuesday and promised expedited recovery help through a federal disaster declaration. The current round of flooding, triggered by last week’s brutal “bomb cyclone” storm, was expected to persist across several states into next week. The Army Corps of Engineers says more than a dozen levees have been damaged or just overwhelmed in Nebraska, Iowa and Missouri.” 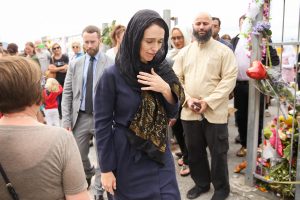 WELLINGTON, NEW ZEALAND – MARCH 17: Prime Minister Jacinda Ardern leaves after a visit to the Kilbirnie Mosque on March 17, 2019 in Wellington, New Zealand. 50 people are confirmed dead and 36 are injured still in hospital following shooting attacks on two mosques in Christchurch on Friday, 15 March. The attack is the worst mass shooting in New Zealand’s history. (Photo by Hagen Hopkins/Getty Images)

Top line: “It has been a week since a gunman spouting anti-immigrant hate stormed into two mosques in Christchurch, killing 50 people and transforming New Zealand. The funerals have only just started. Yet the country has moved with astonishing speed in response to the tragedy. Exactly a week after the attacks, hundreds of Muslims were joined by thousands of other New Zealanders, including the prime minister, for Friday prayers. The call to prayer rang out across Hagley Park, opposite the Al Noor Mosque, where 42 people were killed. On Thursday, the government banned military-style weapons and began to rewrite gun laws with support from across the political spectrum and with the backing of many lobbying groups associated with gun use.”

Top line: “The Syrian government vowed to take back the Israeli-occupied Golan Heights as its allies and enemies alike condemned U.S. President Donald Trump on Friday for moving to recognize Israeli sovereignty over the territory seized in war. Trump’s statement on Thursday marked a dramatic shift in U.S. policy over the status of a disputed area that Israel captured from Syria in the 1967 Middle East conflict and annexed in 1981 – a move not recognized internationally. Against this backdrop of hostility toward the U.S. move, Secretary of State Mike Pompeo landed in Beirut on Friday after visiting Israel. He is expected to raise pressure on the government to curb the influence of the Iran-backed Hezbollah.”

Top line: ““Everything the light touches is our kingdom.” It’s a line from Disney’s “The Lion King,” spoken by Mufasa to young Simba as they sit atop Pride Rock. And on Wednesday morning, just after midnight on the East Coast, it seemed to describe the Walt Disney Company itself, as the conglomerate closed its $71.3 billion acquisition of 21st Century Fox assets. It is now an entertainment colossus the size of which the world has never seen. The ripple effects may not become clear for years. Analysts say that Disney could force smaller studios to merge as they scramble to compete. It will have greater leverage over theater owners when it comes to box office splits. And Disney’s plans to use Fox content to forcefully move into streaming could slow the growth of Netflix.”

Top line: “Two weeks ago, Warner Bros. Chairman and Chief Executive Kevin Tsujihara seemed to be on the rise. His new boss at AT&T Inc.-owned WarnerMedia had just given him an expanded role at the company after the Burbank studio notched a record year at the box office and secured a flurry of deals with key producers. That all came to a sudden end Monday, when Tsujihara quit amid allegations that he had an affair with a young aspiring actress in 2013 and tried to help her get parts in movies and television shows.”

Top line: “US Justice Department prosecutors have issued multiple subpoenas as part of an investigation into Boeing’s Federal Aviation Administration certification and marketing of 737 Max planes, sources briefed on the matter told CNN. The criminal investigation, which is in its early stages, began after the October 2018 crash of a 737 Max aircraft operated by Lion Air in Indonesia, the sources said. Transportation Secretary Elaine Chao on Tuesday asked the agency’s inspector general to investigate the Max certification. Criminal investigators have sought information from Boeing on safety and certification procedures, including training manuals for pilots, along with how the company marketed the new aircraft, the sources said. It’s not yet clear what possible criminal laws could be at issue in the probe.” 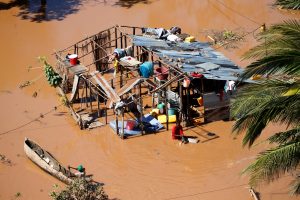 A local paddles past a woman at her home during floods after Cyclone Idai, in Buzi district, outside Beira, Mozambique, March 21, 2019. REUTERS/Siphiwe Sibeko

7.  ‘Biggest Fight Is Against The Clock,’ As Death Toll Rises From Cyclone Idai – NPR, Dalia Mortada

Top line: “Thousands of people remain stranded in floodwaters in the wake of Cyclone Idai, which struck the coast of Mozambique and swept through Zimbabwe last week. Mozambique’s Land and Environment Minister Celso Correia told reporters that 15,000 people are still stranded. But as rescue workers struggle to gain access to regions largely choked off by the flooding, the death toll is expected to rise sharply. The cyclone has claimed more than 200 lives in Mozambique, 139 in Zimbabwe and 56 in Malawi, officials said. Mozambique’s President Filipe Nyusi said the death toll there could climb to 1,000.” 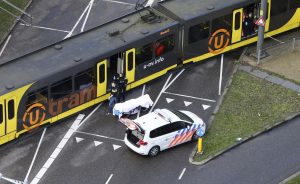 Special Police forces inspect a tram at the 24 Oktoberplace in Utrecht, on March 18, 2019 where a shooting took place. – A gunman opened fire on a tram in the Dutch city of Utrecht on March 18, 2019, killing at least one person and wounding several in what officials said was a possible terrorist incident. (Photo by RICARDO SMIT/AFP/Getty Images)

Top line: “The main suspect in a deadly tram shooting in the Dutch city of Utrecht will be charged with offenses including multiple murder or manslaughter with a terrorist intent, prosecutors said Thursday. Investigations so far into Monday’s shooting that left three dead and three seriously injured indicate that the shooter acted alone, prosecutors said in a written statement. The main suspect, identified by police as Gokmen Tanis, a 37-year-old man of Turkish descent, also faces charges of attempted murder or manslaughter and making threats with a terrorist intent.”

Top line: “Facebook advertisers can no longer target users by age, gender and ZIP code for housing, employment and credit offers, the company announced Tuesday as part of a major settlement with civil rights organizations. The wide-ranging agreement follows reporting by ProPublica since 2016 that found Facebook let advertisers exclude users by race and other categories that are protected by federal law. It is illegal for housing, job and credit advertisers to discriminate against protected groups.”

Top line: “Google launched its Stadia cloud gaming service at the Game Developers Conference (GDC) in San Francisco. Google CEO Sundar Pichai, who says he plays FIFA 19 “quite a bit,” introduced the Stadia service during a special keynote at GDC this morning. Describing it as a platform for everyone, Pichai talked up Google’s ambitions to stream games to all types of devices. Stadia will stream games from the cloud to the Chrome browser, Chromecast, and Pixel devices, and it will launch at some point in 2019 in the US, Canada, UK, and Europe.”