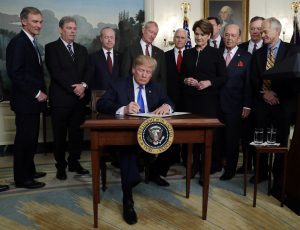 President Trump dominated the news this week, as he signed the $1.3 billion spending bill, moved to impose up to $60 billion in tariffs against China, and replaced General H. R. McMaster as the national security adviser with former U.N. Ambassador John Bolton.

The Trump administration charged and sanctioned nine Iranian hackers for attacking U.S. universities, companies, and government institutions on behalf of the Iranian government.

In other news of note, fallout from the Facebook data mining scandal continued and Uber halted its driverless car program after an Arizona woman was killed by one of its autonomous vehicles.

At least two people were killed and five injured in a series of package bombings around Austin, Texas. The alleged suspect Mark Conditt died during a confrontation with the police. Conditt reportedly blew himself up in his car and left behind a list of planned future targets, but no clear motive.

Top line: “Trump cited misgivings about its contents, but said he agreed to sign the bill to deliver a boost in defense spending — repeatedly casting the decision as one in which he had “no choice.” “There are a lot of things I’m unhappy about in this bill. There are a lot of things that we shouldn’t have had in this bill, but we were in a sense forced if we want to build our military,” Trump said. “I said to Congress, I will never sign another bill like this again.”” 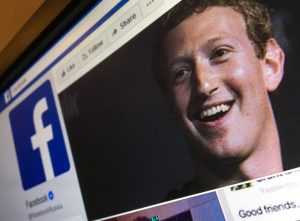 A picture taken in Moscow on March 22, 2018 shows an illustration picture of the English language version of Facebook about page featuring the face of founder and CEO Mark Zuckerberg.
A public apology by Facebook chief Mark Zuckerberg, on March 22, 2018 failed to quell outrage over the hijacking of personal data from millions of people, as critics demanded the social media giant go much further to protect privacy. / AFP PHOTO / Mladen ANTONOV (Photo credit should read MLADEN ANTONOV/AFP/Getty Images)

Top line: “Consultants working for Donald Trump’s presidential campaign exploited the personal Facebook data of millions. That’s the key message in March 17 stories by The New York Times and the UK’s Guardian and Observer newspapers, as well as in statements from Facebook. The stories and statements indicate the social networking giant was duped by researchers, who reportedly gained access to the data of more than 50 million Facebook users, which was then misused for political ads during the 2016 US presidential election.”

Top line: “Trump threatened Thursday to slap tariffs on up to $60 billion in Chinese imports. China announced a more modest package of potential tariffs of its own and vowed to “fight to the end” to defend its interests if a trade war breaks out.” 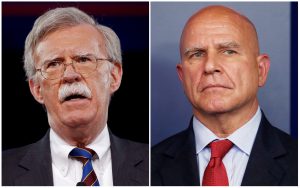 Top line: “Charging ahead with the dramatic remaking of his White House, President Donald Trump said Thursday he would replace national security adviser H.R. McMaster with the former U.N. Ambassador John Bolton, a foreign policy hawk entering a White House facing key decisions on Iran and North Korea. After weeks of speculation about McMaster’s future, Trump and the respected three-star general put a positive face on the departure, making no reference to the growing public friction between them. Trump tweeted Thursday that McMaster had done “an outstanding job & will always remain my friend.” He said Bolton will take over April 9 as his third national security adviser in just over a year.”

Top line: “The United States on Friday charged and sanctioned nine Iranians and an Iranian company for attempting to hack into hundreds of universities worldwide, dozens of companies and parts of the U.S. government, including its main energy regulator, on behalf of Tehran’s government.”

Top line: “President Donald Trump’s administration has moved to ban bump stocks, devices that effectively let semiautomatic weapons mimic machine guns. On Friday, the US Department of Justice filed a regulation that will prohibit the devices, fulfilling Trump’s request to do so. The regulation would classify these devices as banned “machine guns” under current federal law. The regulation will now undergo a 90-day period for public comments, after which it could be changed or go into effect as is.”

Top line: “John Dowd resigned Thursday as President Donald Trump’s lead lawyer for the Russia investigation amid a wider shakeup of Trump’s legal team that raised new questions about Trump’s strategy for dealing with special counsel Robert Mueller. Dowd stepped down just days after he issued a statement calling for Mueller’s probe to be shuttered, which he first attributed with his title as the president’s lawyer and then backtracked to say he was speaking only for himself.” 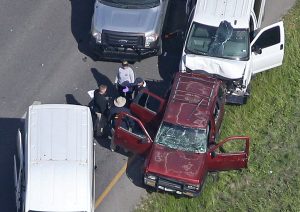 Law enforcement personnel investigate the scene where the Texas bombing suspect blew himself up on the side of a highway north of Austin in Round Rock, Texas. (REUTERS/Loren Elliott)

Top line: “Mark Conditt, who terrorized this city for nearly three weeks with a series of deadly bombings, left behind evidence of potential future targets before he killed himself on Wednesday, a law enforcement official said on Friday. Officials were examining these future targets as part of the investigation. The official declined to describe these targets in detail, but said they were a mix of locations that had no common thread linking them.”

Top line: “A police officer who swapped himself for a hostage in a supermarket siege is fighting for his life in hospital, French President Emmanuel Macron says. The gendarme, whom media named as Arnaud Beltrame, helped bring an end to a gunman’s shooting spree that killed three in southern France. The gunman – 25-year-old Redouane Lakdim – said he was fighting on behalf of the Islamic State group. He was shot dead by French police after mounting three separate attacks. Sixteen people were injured, two seriously, in what Mr Macron called an act of “Islamist terrorism.”’

Top line: “A female pedestrian was killed after being struck by an autonomous Uber vehicle in Arizona, according to ABC 15. In response, Uber has pulled all of its self-driving cars from public roads in the state as well as in the cities of San Francisco, Toronto, and Pittsburgh. Uber confirms that the vehicle was traveling in autonomous mode with a safety driver behind the wheel during the crash. That would make the pedestrian one of the first known victims of a crash involving a self-driving car.”