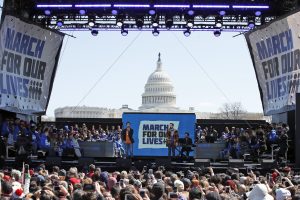 The diplomatic fight over Russia’s alleged role in a nerve agent attack in Britain escalated this week when American, Russian and  European diplomats were expelled from their host countries. The U.S. also moved to close the Russian consulate in Seattle and Russia announced the impending closure of the American consulate in St. Petersburg.

North Korea remained in the news as the country’s reclusive leader Kim Jong Un paid China’s President Xi Jinping a surprise visit, reportedly to discuss possible denuclearization. It was Kim’s first trip out of his country since coming to power and came shortly before a planned April 27 summit with South Korean President Moon Jae-in.

Closer to home, the student-led March for Our Lives saw hundreds of thousands rally in cities around the world to protest gun violence and school shootings.

Controversy over deadly police shootings of unarmed black men was reignited with the Louisiana attorney general declining to press charges against two Baton Rouge officers who shot Alton Sterling in 2016, and with the funeral and independent autopsy results of Stephon Clark in Sacramento, California.

Technological innovations were on display when Apple unveiled their latest iPad developments for the education market.

Top line: “Russia will close the U.S. Consulate in St. Petersburg and kick out 60 American diplomats in response to Monday’s coordinated expulsion of Russian diplomats from the United States and a number of other countries, Foreign Minister Sergei Lavrov said Thursday. The move continues an ongoing escalation of tit for tat between Moscow and the West that began in early March with the alleged poisoning of a former Russian double agent on British soil with a Soviet-designed nerve agent. American officials said Thursday that another round might be coming.” 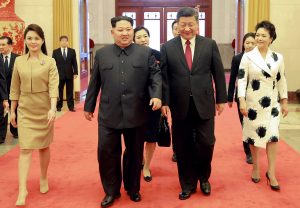 Top line: “North Korean leader Kim Jong Un has made his first foreign trip since assuming power in 2011, meeting China’s President Xi Jinping in Beijing and discussing giving up the country’s nuclear weapons, according to Chinese state media. Kim, who made the surprise trip to the Chinese capital at Beijing’s request, said he felt compelled to personally inform President Xi of the rapid diplomatic developments on the Korean Peninsula in recent weeks, Xinhua reported.”

Top line: “Demonstrators flooded streets across the globe in public protests on Saturday, calling for action against gun violence. Hundreds of thousands of marchers turned out, in the most ambitious show of force yet from a student-driven movement that emerged after the recent massacre at a South Florida high school.” 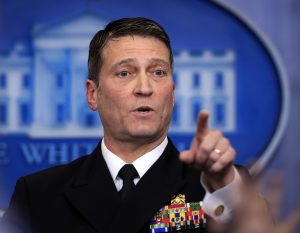 In a Tuesday, Jan. 16, 2018 file photo, White House physician Dr. Ronny Jackson speaks to reporters during the daily press briefing in the Brady press briefing room at the White House. A story falsely claims President Donald Trump forged the results of his physical. The piece shared on social media bases its claim on the White House getting the first name of the president’s doctor wrong in an initial statement last month about the results. (AP Photo/Manuel Balce Ceneta, File)

Top line: “President Trump intends to replace Veterans Affairs Secretary David Shulkin with the White House physician, Navy Rear Adm. Ronny L. Jackson, the president announced on Twitter on Wednesday. Until Jackson is confirmed by the Senate, Trump said, Robert Wilkie of the Department of Defense will serve as acting secretary of the VA.”

Top line: “Louisiana’s top prosecutor announced Tuesday that he will not pursue charges against police officers in the death of Alton Sterling — coming nearly two years after the shooting outside of a Baton Rouge convenience store was captured on graphic cellphone video. Police shot Sterling, a 37-year-old black man, six times during the July 2016 incident. The deadly altercation — which came the day before a similar police shooting involving a black man in Minnesota — sparked days of protests and national outcry over excessive use of force and policing in minority communities.”

Top line: “The widow of a gunman who killed dozens at a Florida nightclub two years ago has been found not guilty of helping him. Noor Salman, 31, was charged with obstruction of justice and aiding Omar Mateen in providing support to the Islamic State militant group. Her lawyers had argued that she was an innocent victim of her husband’s lies. Mateen killed 49 people at the Pulse nightclub in June 2016 before he was shot dead by police.”

Top line: “Unarmed Stephon Clark was shot eight times, mostly to the back by two Sacramento police officers in his grandmother’s backyard, according to an independent autopsy that was released Friday amid growing tensions in the city and across the nation. Clark’s death, which took up to 10 minutes, reignited the familiar anger and calls for justice after similar shootings by police of unarmed black men in the United States.” 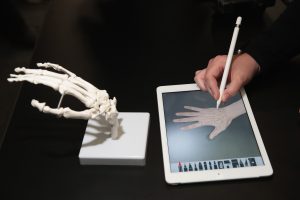 A guest draws the bones of the hand on Apple’s new 9.7-inch iPad during an event held to introduce the device at Lane Tech College Prep High School on March 27, 2018 in Chicago, Illinois. The device will work with Apple Pencil and is available today. (Photo by Scott Olson/Getty Images)

8. The 10 most important announcements from Apple’s first big event of 2018 – BGR

Top line: “Tuesday’s “Let’s take a field trip” event in Chicago was aimed squarely at the education market though. It’s obviously a hugely important space, and that goes without saying. It’s not terribly exciting, however, and that’s probably why Apple didn’t even both to live stream Tuesday morning’s press conference. No, the event wasn’t terribly exciting. But there were still some important announcements made during Apple’s press conference in Chicago on Tuesday. In this post, we’ll recap all of the key things Apple announced during its first event of the year.”

Top line: “Zuckerberg has been the subject of withering criticism from both Republican and Democratic members of Congress, as well as members of the U.K.’s Parliament, over signs that the company he co-founded and leads has failed to protect user privacy. Lawmakers briefed this week by Facebook staff complained that the aides sent to closed-door briefings couldn’t answer many of their questions.”

Top line: “A federal judge has rejected adult film star Stormy Daniels’ request for permission to question Donald Trump and schedule a trial soon in her lawsuit to end her agreement to remain silent about her alleged sexual encounter with the U.S. president.”