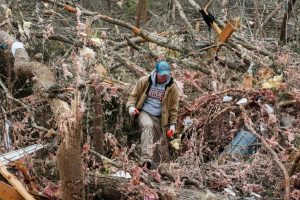 Joey Roush walks through debris at his mother’s home after it was destroyed in a tornado in Beauregard, Ala. Rescuers resumed search operations after tornadoes killed at least 23 people. (TAMI CHAPPELL/AFP/Getty Images)

The House of Representatives passed H.R. 1, a package of reforms to elections, campaign finance and ethics. Changes include more early voting, automatic voter registration and an automatic federal holiday on Election Day, as well as redistricting and requiring presidential candidates to disclose 10 years of tax returns. The bill now goes to the GOP-controlled Senate, where Sen. Mitch McConnell has said he does not plan to move it forward for a vote.

Health and medical issues made headlines this week when a second person showed signs of being HIV-free after receiving new stem-cell therapy.

Arizona Sen. Martha McSally, the first female fighter pilot to serve in combat, revealed she was raped by a superior officer early in her career, but did not report it because “like so many women and men, I didn’t trust the system at the time. I blamed myself. I was ashamed and confused. I thought I was strong but felt powerless. The perpetrators abused their position of power in profound ways.” 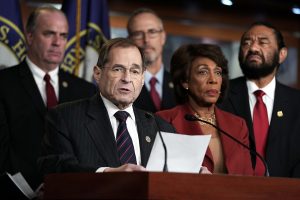 Top line: “The bill, known as H.R. 1 and dubbed the For the People Act by Democrats, was approved on a party-line 234-193 vote. The measure makes far-reaching changes to the country’s electoral and campaign-finance system, along with ethic reforms that target President Donald Trump and his administration. The legislation includes a national expansion of early voting, redistricting reform, making Election Day a federal holiday, automatic voter registration and stricter disclosure rules for a bevy of political activities. One particular ethics provision would mandate presidential and vice presidential candidates to publicly disclose 10 years of tax returns — a measure taken after Trump has refused to do so despite decades of precedent.”

Top line: “House Judiciary Committee Chairman Jerrold Nadler said his panel was beginning the probe into possible obstruction of justice, corruption and abuse of power and is sending document requests to 81 people linked to the president and his associates. The broad investigation could be setting the stage for an impeachment effort, although Democratic leaders have pledged to investigate all avenues and review special counsel Robert Mueller’s upcoming report before trying any drastic action.”

Top line: “Lobbyist and former Trump campaign chairman Paul Manafort learned on Thursday that he will serve almost four years in prison — far short of what had been expected and recommended — for financial fraud convictions obtained by special counsel Robert Mueller as he investigated Manafort’s alleged collusion with the Russian government in 2016. The crimes, though serious among white-collar offenses, did not relate directly to Manafort’s work as Trump’s 2016 campaign chairman. Manafort, 69, had been facing up to 25 years in prison, a sentence that could have essentially kept him in jail for the rest of his life. Even at just under four years, the sentence is the longest given yet to any defendant in the Mueller probe.” 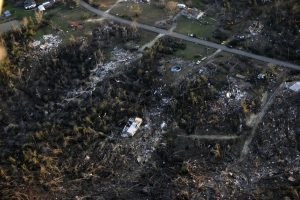 Destruction from tornadoes in Lee County, Ala. (AP Photo/Gerald Herbert)

Top line: “Lee County authorities on Tuesday released the names of the victims of a monstrous tornado that killed at least 23 people, including seven in one family, as meteorologists warned that another blast of severe weather could roar through the region in coming days. President Donald Trump also said Tuesday that he will visit the storm-battered area on Friday, five days after the deadly twister left a mile-wide path of destruction. Sheriff Jay Jones said the number of people unaccounted for was down to seven or eight, and he hoped the number would decrease as more of the missing contact friends and family.”

Top line: “A person with HIV seems to be free of the virus after receiving a stem-cell transplant that replaced their white blood cells with HIV-resistant versions. The patient is only the second person ever reported to have been cleared of the virus using this method. But researchers warn that it is too early to say that they have been cured.The patient — whose identity hasn’t been disclosed — was able to stop taking antiretroviral drugs, with no sign of the virus returning 18 months later. The stem-cell technique was first used a decade ago for Timothy Ray Brown, known as the ‘Berlin patient’, who is still free of the virus.”

Magazine to follow: HIV and AIDS: Possible Cure in Sight 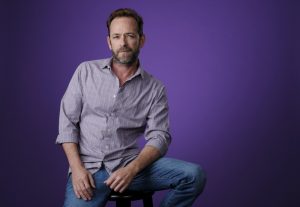 Top line: “Luke Perry, who rose to fame as bad-boy Dylan McKay on the TV series Beverly Hills 90210, has died at age 52. Perry’s publicist announced Monday that the actor “passed away today after suffering a massive stroke” in Los Angeles. Perry reportedly suffered a stroke last Wednesday, when TMZ and a number of media outlets reported that an ambulance took him from a house in Sherman Oaks, Calif., to a hospital. When he died, Perry “was surrounded by his children Jack and Sophie, fiancee Wendy Madison Bauer, ex-wife Minnie Sharp,” and other close relatives and friends, his publicist said.”

Top line: “Food and Drug Commissioner Scott Gottlieb, who used his post to tackle difficult public health issues from youth vaping to opioid addiction – surprising early skeptics worried about his drug industry ties – resigned Tuesday, effective in about a month. Gottlieb, who has been commuting weekly to Washington from his home in Connecticut, said he wants to spend more time with his family. The 46-year-old physician, millionaire and cancer survivor known for a self-assured, sometimes brash, manner lives in Westport, with his wife and three daughters – 9-year-old twins and a 5-year-old. The resignation was not sought by the White House. A senior White House official said Gottlieb had spoken to President Trump, and that the president liked the FDA chief and did not want him to leave.”

Top line: “Facebook will increasingly shift its focus away from public posts to encrypted, ephemeral communications on its trio of messaging apps, CEO Mark Zuckerberg said today in a significant new blog post. In a 3,200-word missive, Zuckerberg says that encryption will be one of the keys to Facebook’s future — and that the company is willing to be banned in countries that refuse to let it operate as a result. Public social networks have their place, Zuckerberg adds, but he sees a large future opportunity built on “a simpler platform that’s focused on privacy first.” That would mark a sharp reversal for Facebook, which has grown into one of the world’s wealthiest companies by inventing exotic new methods of personal data collection and allowing brands to sell advertising against it.” 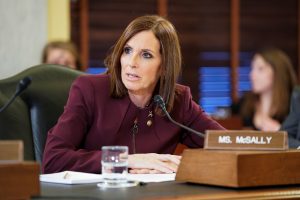 U.S. Senator Martha McSally (R-AZ) speaks during a Senate Armed Subcommittee hearing on preventing sexual assault where she spoke about her experience of being sexually assaulted in the military on Capitol Hill in Washington, U.S., March 6, 2019. Earlier in the hearing, McSally said she had been raped by a superior officer and felt “horrified” by how her experiences were handled. REUTERS/Joshua Roberts

Top line: “Sen. Martha McSally, during an emotional congressional hearing on military sexual assault Wednesday, said a superior Air Force officer raped her. McSally, the nation’s first female fighter pilot to serve in combat, told the Senate Armed Services Committee that she was “preyed upon and raped by a superior officer.” “I also am a military sexual assault survivor, but unlike so many brave survivors, I didn’t report being sexually assaulted,” McSally said. “Like so many women and men, I didn’t trust the system at the time. I blamed myself. I was ashamed and confused. I thought I was strong but felt powerless. The perpetrators abused their position of power in profound ways.” McSally served in the Air Force for 26 years and mostly flew the A-10.”

Top line: “Alex Trebek, the longtime “Jeopardy!” host, revealed Wednesday that he has been diagnosed with stage 4 pancreatic cancer. Trebek, 78, said in a video posted to YouTube he will attempt to finish out this season of “Jeopardy!” Trebek has hosted the show since 1984. He took a leave of absence in January 2018 after surgery to remove blood clots from his brain. In October 2018, he renewed his contract with Sony Pictures Television to continue as host of the quiz show through 2022.”