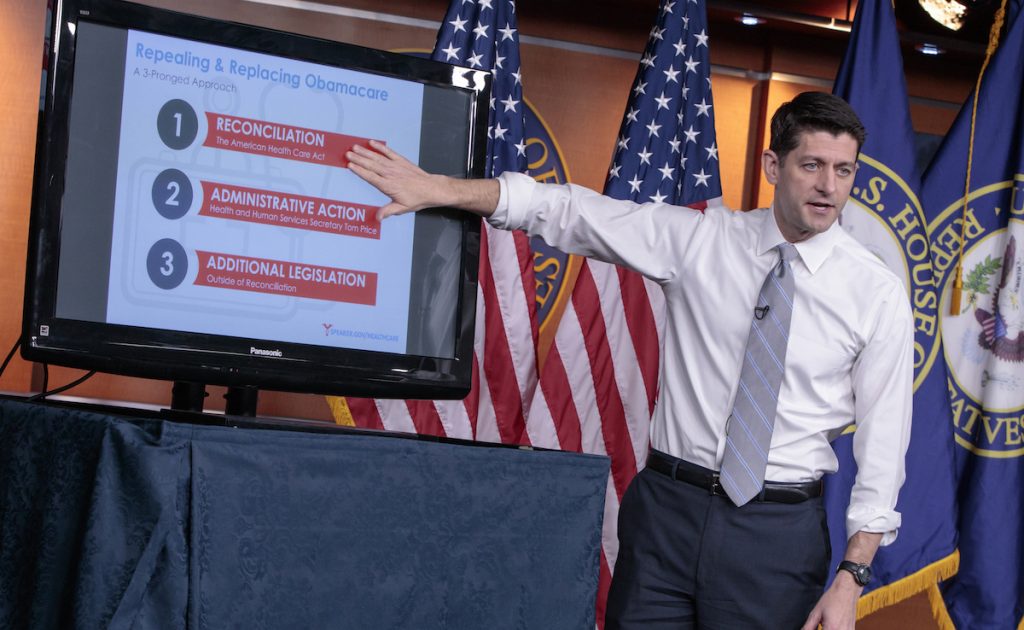 House Speaker Paul Ryan of Wis. uses charts and graphs to make his case for the GOP’s long-awaited plan to repeal and replace the Affordable Care Act, Thursday, March 9, 2017, during a news conference on Capitol Hill in Washington. (AP Photo/J. Scott Applewhite)

Health care. Immigration. Security. These common policy themes throughout the Donald Trump administration all received increased attention this week. Republicans on Capitol Hill rolled out a new plan for Obamacare, an altered immigration order was released by the White House and national security remained in the spotlight with a WikiLeaks reveal of CIA hacking tools.

Read more about these issues and the other biggest news of the week, as it appeared in The Daily Edition.

Top line: “The bill represents an opening for an administration that has been mired in infighting and controversy over an early executive action on immigration. And it will allow Mr. Trump to make good on a pledge he made in rally after rally in 2016 to replace Mr. Obama’s law, which he called a ‘disaster.’

And it has momentum. On Thursday, two key House committees approved the legislation, which would undo the Affordable Care Act and replace it with a more modest system of tax credits and a rollback of Mr. Obama’s Medicaid expansion. Party-line votes by the House Energy and Commerce and Ways and Means Committees sent the measure to the House Budget Committee for consideration next week before a final House vote that Speaker Paul D. Ryan plans for later this month.”

Top line: “President Trump signed a new travel ban Monday that administration officials said they hope will end legal challenges over the matter by imposing a 90-day ban on the issuance of new visas for citizens of six majority-Muslim nations.

In addition, the nation’s refu­gee program will be suspended for 120 days, and the United States will not accept more than 50,000 refugees in a year, down from the 110,000 cap set by the Obama administration.

The new guidelines mark a dramatic departure from Trump’s original ban, issued in January and immediately met by massive protests and then ordered frozen by the courts. The new ban lays out a far more specific national security basis for the order, blocks the issuance only of new visas, and names just six of the seven countries included in the first executive order, omitting Iraq.”

Top line: “President Donald Trump will have to look somewhere besides Republican-controlled Capitol Hill for backup to his explosive and unsubstantiated charge that former President Barack Obama wiretapped Trump Tower before the election…The unsubstantiated allegations are putting the congressional GOP in a box. If Republicans jump in behind Trump wholeheartedly, they risk being proved wrong by congressional probes into Russia’s influence on the election. But they also know all too well that Trump harbors grudges and values loyalty from his allies.”

Top line: “WikiLeaks has released thousands of files that it identifies as CIA documents related to the agency’s cyber-espionage tools and programs.

The documents published on Tuesday include instruction manuals, support documents, notes and conversations about, among other things, efforts to exploit vulnerabilities in smartphones and turn smart TVs into listening devices. The tools appear to be designed for use against individual targets, as part of the CIA’s mandate to gather foreign intelligence.”

Top line: “A South Korean court removed the president on Friday, a first in the nation’s history, rattling the delicate balance of relationships across Asia at a particularly tense time.

Her removal capped months of turmoil, as hundreds of thousands of South Koreans took to the streets, week after week, to protest a sprawling corruption scandal that shook the top echelons of business and government.”

Top line: “U.S. Attorney General Jeff Sessions abruptly asked the remaining 46 chief federal prosecutors left over from the Obama administration to resign on Friday, including Manhattan U.S. Attorney Preet Bharara, who had been asked to stay on in November by then President-elect Donald Trump.

Although U.S. attorneys are political appointees, and the request from Trump’s Justice Department is part of a routine process, the move came as a surprise. Not every new administration replaces all U.S. attorneys at once.”

Top line: “In a blow to advocates of transgender rights, the U.S. Supreme Court Monday said it would not hear the case of a transgender high school student fighting to use the bathroom of his choice.

The court also wiped off the books a lower court ruling in favor of the student, Gavin Grimm, who said federal law allowed him to use school restrooms matching his gender identity.”

Top line: “U.S. employers added a robust 235,000 jobs in February and raised pay at a brisk pace — signs that a resilient economy has given many companies the confidence to hire in anticipation of solid growth ahead.

With the unemployment rate dipping to a low 4.7 percent from 4.8 percent, the job market appears to be fundamentally healthy or nearly so.”

9. New footage of Michael Brown raises questions about his death in Ferguson that led to national uproar—Business Insider, Sonam Sheth

Top line: “A new and previously unseen security tape containing footage of Michael Brown before he was shot appears to contradict statements made by Ferguson’s police department about the circumstances surrounding his death…The video, the veracity of which has not yet been confirmed, raises questions about the police department’s claim that Brown committed a strong-armed robbery of the convenience store. When the case initially gained national attention, the police released security footage from a store nearby that showed Brown pushing an employee and taking the cigarillos shortly before he was shot by officer Darren Wilson.”

Top line: “Pope Francis said he is open to the possibility of permitting married men to become priests to address the serious shortage of Catholic priests in some countries…He ruled out the prospect of allowing single men who are already priests to marry but was open to the idea of allowing unmarried laymen or men already married to be ordained.”

~GabyS is curating Behind the Numbers