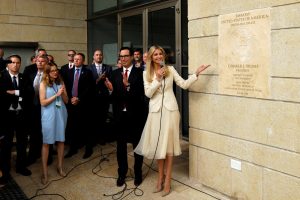 The U.S. Embassy in Israel was relocated to Jerusalem from Tel Aviv with a ceremony that featured Ivanka Trump, Jared Kushner, and a video message from President Donald Trump. The move sparked mass protests at the border fence with Gaza by neighboring Palestinians, dozens of whom were then killed by Israeli soldiers.

North Korean leader Kim Jong Un cancelled a meeting with South Korea and threatened to do the same with the planned June 12 summit with Trump. Kim criticized military drills between the South and the United States.

The Supreme Court reversed a ban on sports betting. Previously, such gambling could only legally be conducted in Nevada.

The lead-up to the 2018 midterm elections continued with lively primary races in Nebraska, Pennsylvania and other states.

The Senate Judiciary Committee released over 2,500 pages of transcripts and documents about the controversial 2016 Trump Tower meeting between Donald Trump Jr., Jared Kushner, and Russian representatives claiming to have dirt on Hillary Clinton.

Gina Haspel was confirmed as the next CIA director after a lengthy and challenging confirmation process. She will be the first woman to head the agency.

CBS and leading shareholder Shari Redstone continue to be locked in a legal fight over the company’s fate and the potential merger with Viacom.

And the royal wedding between Prince Harry and American actress Meghan Markle is upon us and here is everything you need to know before the festivities. 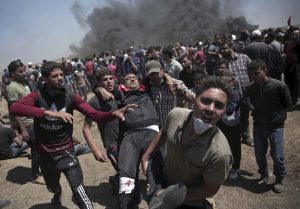 Palestinian protesters carry an injured man who was shot by Israeli troops during a protest at the Gaza Strip’s border with Israel. (AP Photo/Khalil Hamra)

Top line: “More than 2,700 Palestinian demonstrators were injured on Monday — at least 1,350 by gunfire — along the border fence with Gaza, the Health Ministry reported. The mass protests began on March 30 and had already left dozens dead. The latest protests took place as the United States Embassy was formally relocated to Jerusalem from Tel Aviv, on the 70th anniversary of the formation of Israel. The formality and celebration created an almost surreal contrast to the violence raging barely 40 miles away.”

Top line: “U.S. President Donald Trump sought on Thursday to placate North Korea’s leader Kim Jong Un after Pyongyang threatened to scrap an unprecedented summit, saying Kim’s security would be guaranteed in any deal and his country would not suffer the fate of Muammar Gaddafi’s Libya, unless that could not be reached.”

Top line: “The Supreme Court struck down a federal law that prohibits sports gambling Monday in a landmark decision that gives states the go-ahead to legalize betting on sports.

The court ruled 6-3 to strike down the Professional and Amateur Sports Protection Act, a 1992 law that barred state-authorized sports gambling with some exceptions. It made Nevada the only state where a person could wager on the results of a single game.”

Top line: “One thing was clear after the latest round of primaries on Tuesday: Democrats will be spending the next four months fighting among themselves along the familiar battle lines of ideology and identity. If last week’s primaries focused on GOP efforts to maintain or expand their majority in the Senate, the second big primary night of 2018 was all about Democrats and their chances to win back the House this November. And in both Nebraska and Pennsylvania, Democratic voters picked nominees for battleground seats that the national party didn’t expect — and may not have wanted.”

Top line: “The Senate Judiciary Committee released more than 2,500 pages of documents on Wednesday related to its investigation about a meeting in 2016 between top Trump aides and a delegation of Russians who promised to help the campaign. The transcripts and notes reaffirm accounts of the meeting that people involved already have given — that Donald Trump Jr. and his compatriots sought “dirt” offered to them on Hillary Clinton and received at least one political intelligence tip but nothing as explosive as they had hoped.” 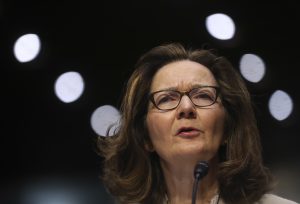 Top line: “Gina Haspel was confirmed Thursday to be the first female director of the CIA with the help of votes from a half-dozen Senate Democrats. Haspel was confirmed in a 54-45 vote, the culmination of a roller-coaster nomination that appeared to be in danger at several points after she was abruptly selected by President Donald Trump in March. Three Republicans opposed Haspel’s nomination: Sens. Rand Paul of Kentucky, Jeff Flake of Arizona and John McCain of Arizona, although McCain did not vote because he’s battling brain cancer at home.”

Top line: “Michigan State University agreed to pay $500 million to settle claims from more than 300 women and girls who said they were assaulted by sports doctor Larry Nassar in the worst sex-abuse case in sports history, officials announced Wednesday.”

Top line: “The legal fight may have just begun. Shari Redstone, a CBS director and president of the company’s controlling shareholder, National Amusements Inc., won a round midday Thursday when a Delaware judge denied a CBS bid to block her from interfering with a board meeting set for 5 p.m. Eastern time. The media company led by Chief Executive Officer Leslie Moonves fears Redstone will oust its board members in a controversial push to merge with Viacom Inc. — also controlled by NAI.” 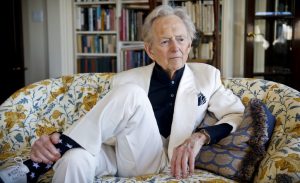 Tom Wolfe in his living room during an interview, July 26, 2016, in New York. (AP Photo/Bebeto Matthews)

9. Tom Wolfe, writer and apostle of ‘New Journalism’ who captured the extravagance of his times, dies at 87 – The Washington Post, Matt Schudel

Top line: “The birth of the literary movement known as “New Journalism” can be traced to one coffee-fueled episode in 1963: Tom Wolfe’s all-nighter. He had been sent to California by Esquire magazine to report on a gathering of custom-car designers and casually cool teenagers. The story, “There Goes (Varoom! Varoom!) That Kandy Kolored (Thphhhhhh!) Tangerine-Flake Streamline Baby,” was more than a dutiful report on the car convention. Mr. Wolfe had discovered an underground culture among the West Coast car designers, hailing them as the vanguard of a new form of modern art, not unlike Picasso.”

10. Meghan Markle: Everything you need to know about Harry’s American bride – The Telegraph, Hannah Furness

Top line: “Meghan Markle, the actress, yoga-lover and now fiancée of Prince Harry seems to have won the part of lifetime. Stepping into the warm embrace of the Royal Family, Ms Markle crossed the Atlantic last year to start a new life, worlds apart from what she is used. Her life will be made even better on Saturday 19 May when the Royal wedding kicks off at St George’s Chapel and the stunning actress receives a new royal title, in front of her wedding guests and the millions of people expected to watch from around the world.”

~HeatherC is reading about The Best Summer Brunch Recipes by PureWow.