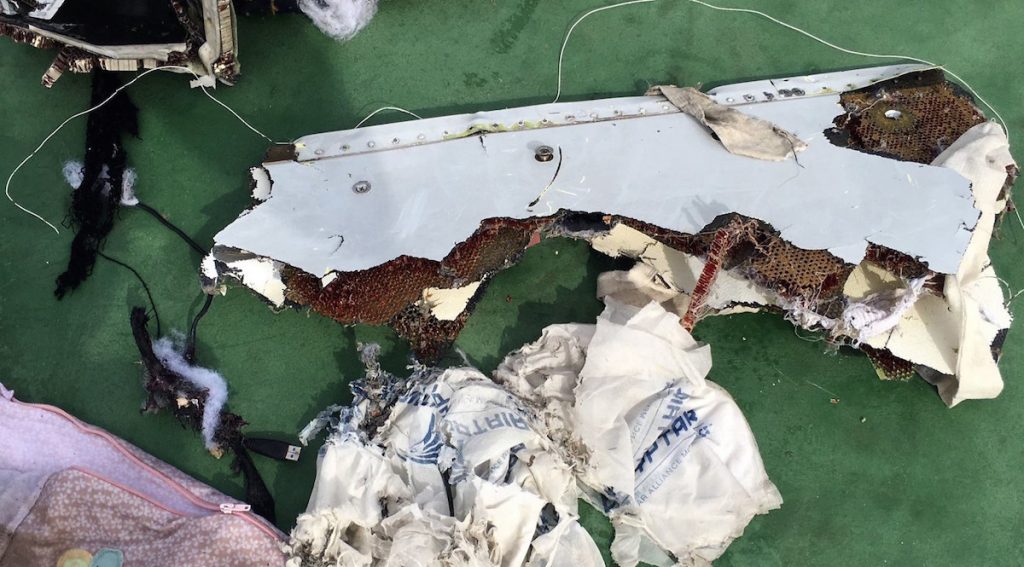 Some of the passengers’ belongings and parts of the wreck of EgyptAir flight MS804 are seen north of Alexandria, Egypt on May 21, 2016. (Photo by Egyptian Armed Forces / Handout /Anadolu Agency/Getty Images)

The biggest news this week surrounded EgyptAir Flight 804, which went down between Paris’ Charles de Gaulle Airport and Cairo. Fifty-six passengers and 10 crew members lost their lives. Read the latest on the investigation and pay tribute to those lost below. You can also read some of the other stories covered in this week’s Daily Edition, including the two Chibok girls who escaped Boko Haram and Tuesday’s election results.

Top line: “Egypt’s military displayed wreckage and personal belongings found in the search for EgyptAir Flight 804 as searchers scoured the Mediterranean Sea on Saturday for the aircraft’s flight data and cockpit voice recorders…No survivors have been found. Egyptian officials have said they suspect the crash was caused by an act of terror, but no group has come forward to claim credit.”

Top line: “There were 56 passengers from 12 different countries, with 30 Egyptians and 15 French nationals among them. There were also seven crew members and three Egyptian security staff on board.”

Top line: “The first Chibok teenager to escape from Boko Haram’s Sambisa Forest stronghold has been flown to Nigeria’s capital, Abuja, where she is expected to be feted by the president, even as her freedom adds pressure on the government to do more to rescue 218 other missing girls. Joy and renewed hope have met the discovery of the 19-year-old, who was 17 when she was abducted, though she appears too traumatized to understand her central role in the tragedy that captured worldwide attention and shone a spotlight on the violent methods of Nigeria’s home-grown Islamic extremists.”

Top line: “A second schoolgirl kidnapped by Boko Haram from the north-eastern Nigerian town of Chibok in 2014 has been freed, according to the Nigerian military. An army spokesman said that Serah Luka had been ‘rescued’ on Thursday morning, along with 96 other women and children held captive by Boko Haram.”

Top line: “A short-handed Supreme Court on Monday sent back to the lower courts several challenges to the Affordable Care Act’s contraceptive-coverage requirement, saying there was a possible compromise between religious objectors and the Obama administration…The contraceptive case was supposed to have been one of the big ones this term. It asked how to make good on Obamacare’s promise that women will receive the health-care coverage they are entitled to when they work for religiously affiliated organizations that believe providing the coverage implicates them in sin. The next steps are unclear, although the opinion revives challenges to the law filed all across the country and seems to envision some sort of negotiation between the objecting organizations and the administration.”

Top line: “Donald J. Trump, the presumptive Republican presidential nominee, released a list of potential Supreme Court nominees on Wednesday as part of an effort to quell concerns that he would not select conservative jurists…Mr. Trump’s selections consisted of six federal appeals court judges appointed by President George W. Bush and five state supreme court justices appointed by Republican governors. All are white, and eight of the 11 are men.”

Top line: “Donald Trump’s feud with Fox News’ Megyn Kelly seemed to come to a close Tuesday night with what was less of an apology and more of a let bygones be bygones moment between the two.”

Top line: “Claims that two Chinese fighter jets carried out an “unsafe” intercept of a US military aircraft over the South China Sea were rejected by Beijing on Thursday. The Pentagon said on Wednesday that one its reconnaissance aircraft was intercepted the previous day when it was carrying out a “routine US patrol” in international airspace. But Chinese foreign Ministry spokesman Hong Lei said the Chinese aircraft kept a safe distance from the US plane…The latest incident – which was said to have taken place near China’s southern island of Hainan – comes a week after Beijing scrambled fighter jets to a disputed reef in the South China Sea as a US ship sailed nearby.”

Top line: “Morley Safer, an intrepid storyteller and interviewer whose name became synonymous with the newsmagazine “60 Minutes,” has died. He was 84.”

~GabyS is reading Advice for 2016 Grads