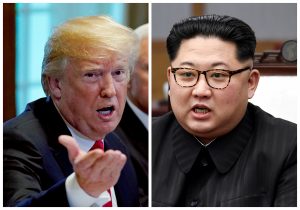 President Donald Trump cancelled the historic summit planned for June 12 with Kim Jong Un, citing North Korea’s “open hostility,” in a public letter. The move came without notice to allies and on the heels of North Korea saying it destroyed its nuclear testing site.

National Football League (NFL) team owners unanimously approved a new policy that requires players to stand for the national anthem when on the field, under penalty of fines for the team as a whole. Players who prefer not to stand must stay behind in the locker room.

Trump signed the biggest rollback of bank regulations since the 2008 financial crisis, specifically targeting the rules put in place with the Dodd-Frank Act. He also signed a resolution to end a rule prohibiting racial bias in auto insurance lending.

Ongoing trade talks between China and the U.S. led to China reducing import tariffs by 15 percent on U.S. cars. The new rates will go into effect July 1.

State primary elections continued in several states. In the Georgia race for governor, Stacey Abrams won Democratic nomination. If she wins the general election, she will be the first black female governor.

An international team of investigators determined that a Russian missile shot down a commercial Malaysia Airlines flight in 2014 as it crossed over Ukraine, killing all 298 people aboard.

Influential novelist Philip Roth died at the age of 85, leaving a legacy of explorations into sexual freedom, his Jewish American identity, and self-exploration.

Top line: “President Trump’s abrupt decision Thursday to abort a summit next month with North Korean leader Kim Jong Un left the White House scrambling to explain the outcome to allies amid fears that the collapse of talks would mean a return to heightened tensions between nuclear powers in East Asia.” 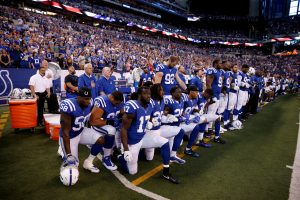 Indianapolis Colts players kneel during the playing of the National Anthem before the game against the Cleveland Browns at Lucas Oil Stadium in Indianapolis, IN, U.S., September 24, 2017. (Brian Spurlock-USA TODAY Sports/File Photo)

Top line: “NFL owners have unanimously approved a new national anthem policy that requires players to stand if they are on the field during the performance but gives them the option to remain in the locker room if they prefer, it was announced Wednesday.”

Top line: “Harvey Weinstein turned himself in to New York City detectives and appeared in court on Friday on charges that he raped one woman and forced another to perform oral sex, a watershed in a monthslong sex crimes investigation and in the #MeToo movement.”

Top line: “Mark Zuckerberg’s appearance in front of the European parliament’s conference of presidents was a long-awaited opportunity to press the founder of the world’s biggest social network – which also owns Instagram and WhatsApp – on his company’s global influence and use of personal data following the Cambridge Analytica scandal. Instead, the rambling format saw the leaders of pan-European political groupings take it in turns to pose dozens of separate questions on wildly different topics, some of which were incisive and some of which involved oblique references to the literature of Goethe.”

Top line: “The measure designed to ease rules on all but the largest banks passed both chambers of Congress with bipartisan support. Backers say the legislation will lift burdens unnecessarily put on small and medium-sized lenders by the Dodd-Frank financial reform act and boost economic growth. Opponents, however, have argued the changes could open taxpayers to more liability if the financial system collapses or increase the chances of discrimination in mortgage lending.”

Top line: “China will cut the import duty on passenger cars to 15 percent, further opening up a market that’s been a chief target of the U.S. in its trade fight with the world’s second-largest economy. The Finance Ministry said Tuesday the levy will be lowered effective July 1 from the current 25 percent that has been in place for more than a decade, boosting shares of automakers from India to Europe.” 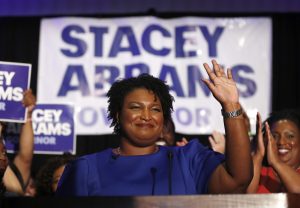 7. What Went Down In Tuesday’s Southern Primaries – FiveThirtyEight, Nathaniel Rakich

Top line: “In Georgia, former state House Minority Leader Stacey Abrams won the Democratic primary for governor, 76.5 percent to 23.5 percent, over former state Rep. Stacey Evans. While Abrams was expected to win, her margin far exceeded the average lead of 22 percentage points she held in the polls, and it’s likely to bolster her reputation as a rising Democratic star. Abrams admits that it’s her intention to run for president someday (just not until 2028 at the earliest).”

Top line: “The missile that downed a Malaysia Airlines flight over eastern Ukraine in 2014 belonged to a Russian brigade, international investigators say. For the first time, the Dutch-led team said the missile had come from a unit based in western Russia. All 298 people on board the Boeing 777 died when it broke apart in mid-air flying from Amsterdam to Kuala Lumpur. It was hit by a missile fired from rebel-held territory in Ukraine. Russia says none of its weapons was used.”

Top line: “At 80 years old, Freeman is one of Hollywood’s biggest stars, with a movie career that spans nearly five decades. In all, 16 people spoke to CNN about Freeman as part of this investigation, eight of whom said they were victims of what some called harassment and others called inappropriate behavior by Freeman. Eight said they witnessed Freeman’s alleged conduct. These 16 people together described a pattern of inappropriate behavior by Freeman on set, while promoting his movies and at his production company Revelations Entertainment.”

Top line: “Author Philip Roth, who tackled self-perception, sexual freedom, his own Jewish identity and the conflict between modern and traditional morals through novels that he once described as “hypothetical autobiographies,” has died. He was 85. Roth was one of America’s preeminent 20th century novelists in a career that began in the 1950s and continued up until nearly the end of his life, resulting in more than 30 novels and short-story collections over seven decades. His work persistently blurred the lines between fiction and memoir, and often left readers both smitten and outraged, particularly in his portrayal of Jewish American life in stories drawn from his boyhood in the predominantly Jewish Weequahic neighborhood of Newark, N.J.”

~HeatherC is reading about Memorial Day.