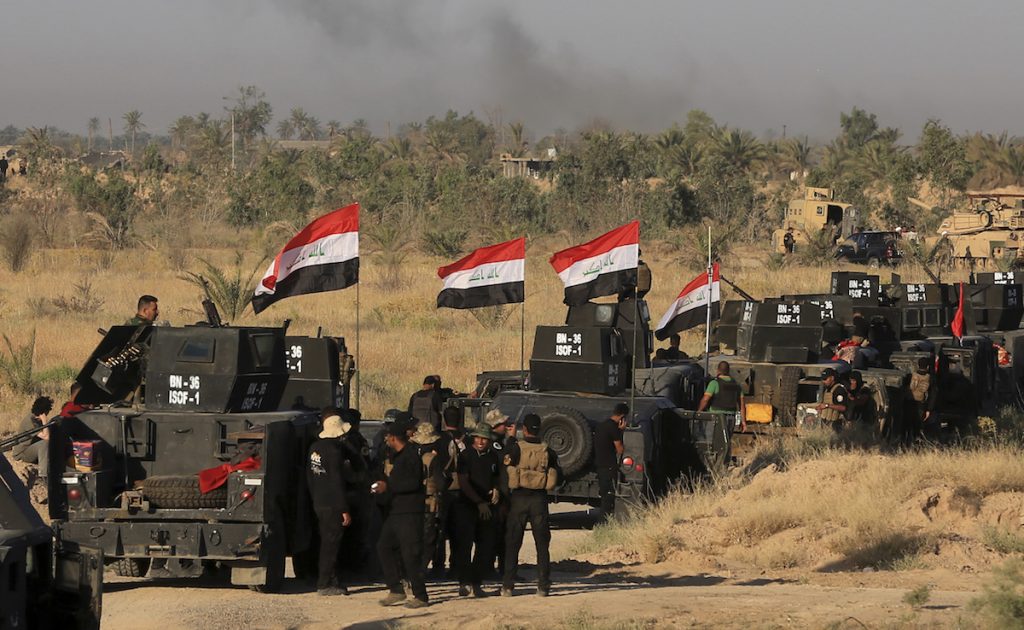 Smoke billows on the horizon as Iraqi military forces prepare for an offensive into Fallujah to retake the city from Islamic State militants in Iraq, Monday, May 30, 2016. (AP Photo/Khalid Mohammed)

A deadly shooting took place at UCLA this week, ending the life of professor William Klug. Fighting is underway in Falluja as Iraqi-led forces attempt to liberate the city from ISIS control. The battle between Donald Trump and Hillary Clinton escalated and the country engaged in a debate over the shooting Harambe, a 17-year-old gorilla, after a boy fell into an enclosure at the Cincinnati Zoo.

Read more about these events and the other biggest news of the week, as the stories appeared in The Daily Edition.

Top line: “The Iraqi-led operation to liberate Falluja is just days old, and the city is already surrounded. Experts say they’re surprised at the professionalism and efficacy of Iraqi forces, which were in tatters nearly two years ago…Falluja is particularly important because of it’s proximity to Baghdad. Analysts say that ISIS has used it as a staging ground to plan attacks it carries out in the Iraqi capital. It and Mosul are the last two Iraqi cities under ISIS’ control.”

Top line: “The chaos started Wednesday morning, when three gunshots rang out in a small office in a UCLA engineering building. When officials arrived, they found the bodies of gunman Mainak Sarkar and his one-time professor William Klug in an apparent murder-suicide, and an ‘instructional note’ with Sarkar’s St. Paul address, [Los Angeles Police Chief Charlie] Beck said.”

For Mr. Trump, whose presidential campaign hinges on his reputation as a businessman, the newly unsealed documents offer an unflattering snapshot of his career since branching out, over the past decade, from building skyscrapers into endeavors that cashed in on his name to sell everything from water and steaks to ties and education.”

Top line: “The gorilla’s death unleashed an outpouring of grief over the holiday weekend. Within hours, that grief had turned to fury as critics questioned the zoo’s decision to kill the endangered 17-year-old gorilla, named Harambe, and called for the boy’s parents to be punished for not adequately supervising their child.”

Top line: “‘It’s no secret that he and I have our differences,’ Ryan wrote. ‘I won’t pretend otherwise. And when I feel the need to, I’ll continue to speak my mind. But the reality is, on the issues that make up our agenda, we have more common ground than disagreement.'”

Top line: “Tests show that Prince died of an opioid overdose, a law enforcement official told The Associated Press on Thursday. The 57-year-old singer was found dead April 21 at his Minneapolis-area estate.”

Top line: “A French naval vessel fitted with sophisticated underwater sensors has picked up a signal believed to have emanated from one of two data recorders from EgyptAir Flight 804, Egyptian and French officials said on Wednesday.

The flight crashed into the Mediterranean Sea on May 19 while en route to Cairo from Paris, killing all 66 people on board…But the cause of the disaster remains a mystery.”

Top line: “A search was underway early Friday for four missing soldiers whose five fellow servicemen died when fast-moving Texas floodwaters swept their truck away…The search for the missing soldiers, though, could be hampered by more bad weather on Friday. Most of Texas was blanketed by flood watches and warnings as of 4 a.m. local time (5 a.m. ET) and some areas could expect another five inches of rain through Saturday, forecasters said.”

10. Keep up with the ongoing Stanley Cup and NBA Finals