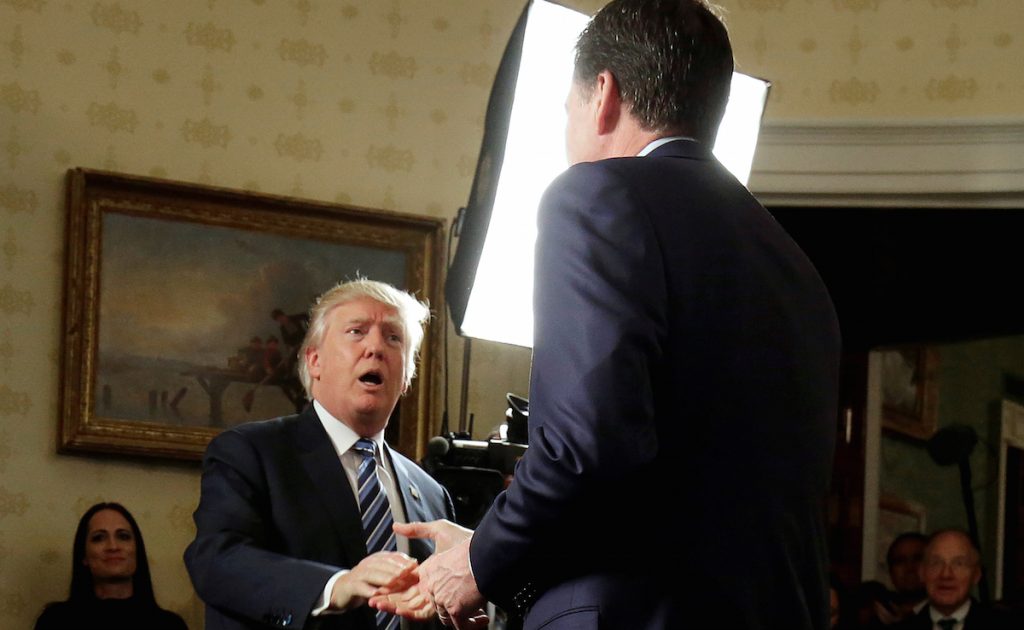 President Donald Trump‘s firing of FBI Director James Comey dominated the week: first with the news he was let go and then with evolving explanations from the White House and unanswered questions from journalists. Trump’s subsequent interviews did little to quell the controversy—neither did the testimonies of acting FBI Director Andrew McCabe and former acting Attorney General Sally Yates.

Read more about the fallout from Comey’s firing and some of the other biggest moments of the week, including Friday’s global cyber attack and the election of Emmanuel Macron as the new president of France.

Top line: “The stated rationale for Comey’s firing delivered Wednesday by principal deputy White House press secretary Sarah Huckabee Sanders was that he had committed ‘atrocities’ in overseeing the FBI’s probe into Hillary Clinton’s use of a private email server as secretary of state, hurting morale in the bureau and compromising public trust.

But the private accounts of more than 30 officials at the White House, the Justice Department, the FBI and on Capitol Hill, as well as Trump confidants and other senior Republicans, paint a conflicting narrative centered on the president’s brewing personal animus toward Comey. Many of those interviewed spoke on the condition of anonymity in order to candidly discuss internal deliberations.”

Top line: “Trump’s tweetstorm railed against the ‘fake media’ and those who expect his surrogates to defend him with ‘perfect accuracy,’ while giving a stern warning to Comey that he ‘better hope that there are no ‘tapes’ of our conversations before he starts leaking to the press!’…

Trump’s tumultuous 48 hours came to a head during an exclusive interview Thursday with NBC News’ Lester Holt, when the president contradicted the reason for Comey’s firing — giving mixed messages and undercutting what his aides and surrogates were telling reporters about the FBI chief’s surprise exit.

The president said he came to the decision to oust Comey on Tuesday after thinking about how ‘this Russia thing … is a made up story.'”

3. McCabe: You Cannot Stop ‘The FBI From Doing The Right Thing’—NPR, Jessica Taylor

Top line: “McCabe directly contradicted White House assertions that one of the reasons Comey was fired by President Trump on Tuesday was because he had lost the respect and support of the FBI rank and file.

‘Director Comey enjoyed broad support within the FBI and still does to this day,’ McCabe said, saying he holds Comey in the ‘absolute highest regard.'” 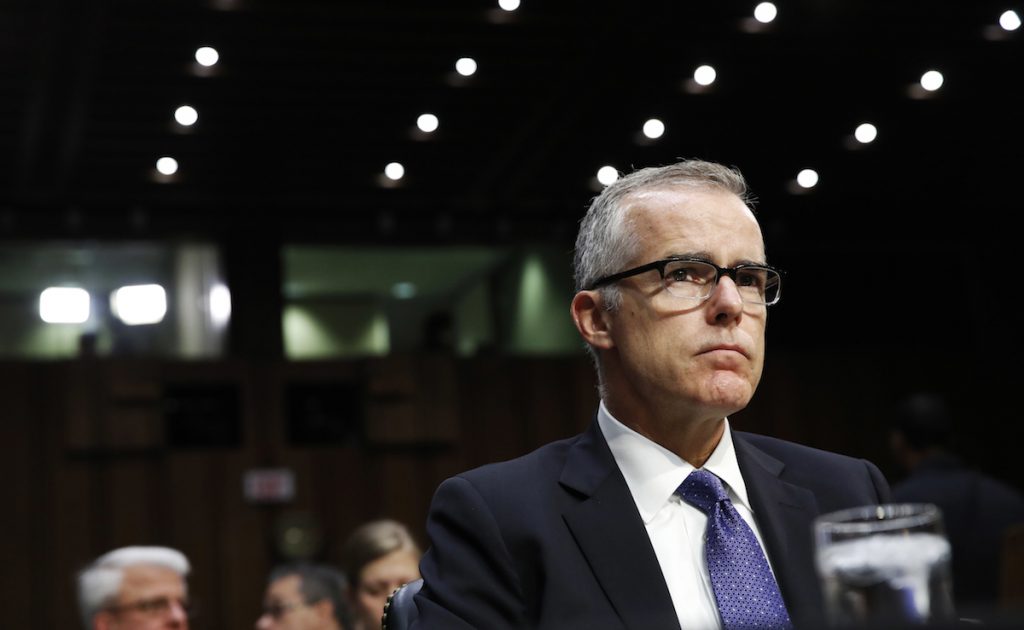 4. How the White House Learned That Michael Flynn Was ‘Compromised’—TIME, Tessa Berenson

Top line: “Former acting attorney general Sally Yates testified Monday that she had warned the Trump Administration that former national security adviser Michael Flynn may have been ‘compromised’ by Russia more than two weeks before Flynn was finally fired in February.” 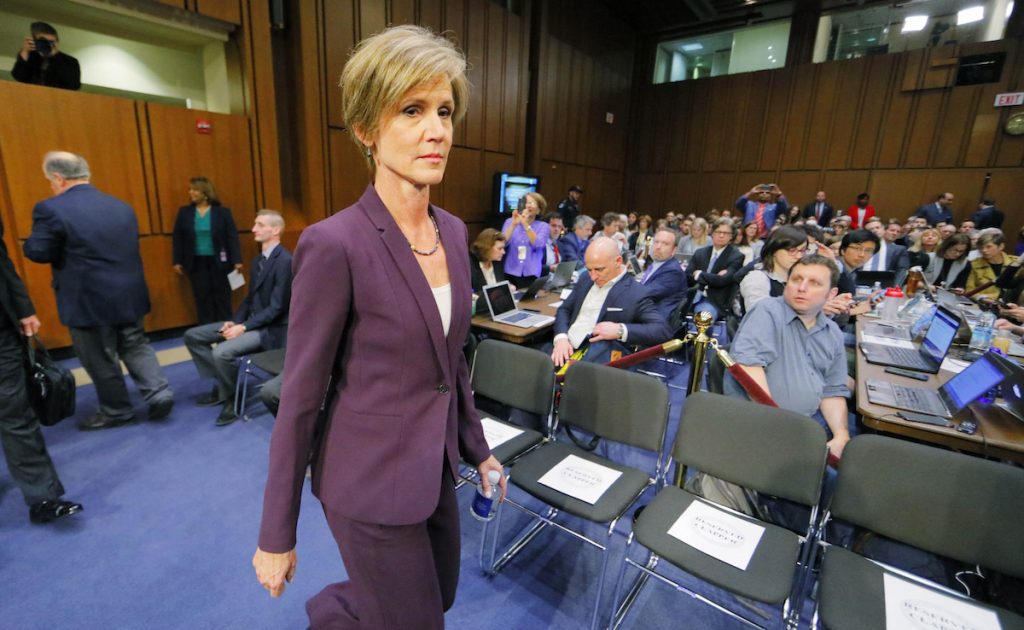 Former Deputy Attorney General Sally Yates arrives to testify before a Senate Judiciary Committee hearing on “Russian interference in the 2016 U.S. election” on Capitol Hill in Washington, U .S., May 8, 2017. REUTERS/Jim Bourg

Top line: “Immigration and Customs Enforcement announced its largest anti-gang operation ever on Thursday, a six-week operation that netted more than 1,300 arrests nationwide.

Though the effort was led by ICE, the focus was not exclusively on immigrants. Of the arrests, 933 were US citizens and 445 were foreign nationals, with 384 in the country illegally.”

Top line: “The statue of the Confederacy’s president had been hoisted from its stone pedestal in the pre-dawn hours and the blue glint of police lights was still visible two blocks away outside the corner laundromat where Carol Patterson sat as diverted rush-hour traffic rolled by…

Opinions among New Orleans residents vary and are nuanced when it comes to Landrieu’s move but the mayor has remained insistent – even amid blistering criticism from some allies – since he first pushed for the monument’s removal in 2015.”

Top line: “Ordering federal prosecutors on Friday to crack down on drug offenders, Atty. Gen. Jeff Sessions made clear he wants the Justice Department to turn the clock back to an earlier, tougher era in the four-decades-long war on drugs.

In a memo, Sessions said federal prosecutors should ‘charge and pursue the most serious, readily provable offense’ in drug cases, even when that would trigger mandatory minimum sentencing.”

Top line: “The leaders of South Korea and China moved on Thursday to mend ties that have been strained by the deployment of an American missile-defense system in South Korea.

During a congratulatory call from President Xi Jinping of China to Moon Jae-in, South Korea’s newly minted president, Mr. Moon revealed his plans to send a delegation to Beijing to resolve the dispute over the system, which China views as a threat to its security, Mr. Moon’s office said.”

Top line: “The pro-EU centrist Emmanuel Macron has vowed to unite a divided and fractured France after winning a decisive victory over the far-right Front National candidate Marine Le Pen in the country’s presidential election.

Macron, 39, a former economy minister who ran as a ‘neither left nor right’ independent promising to shake up the French political system, took 66% to Le Pen’s 34%.” 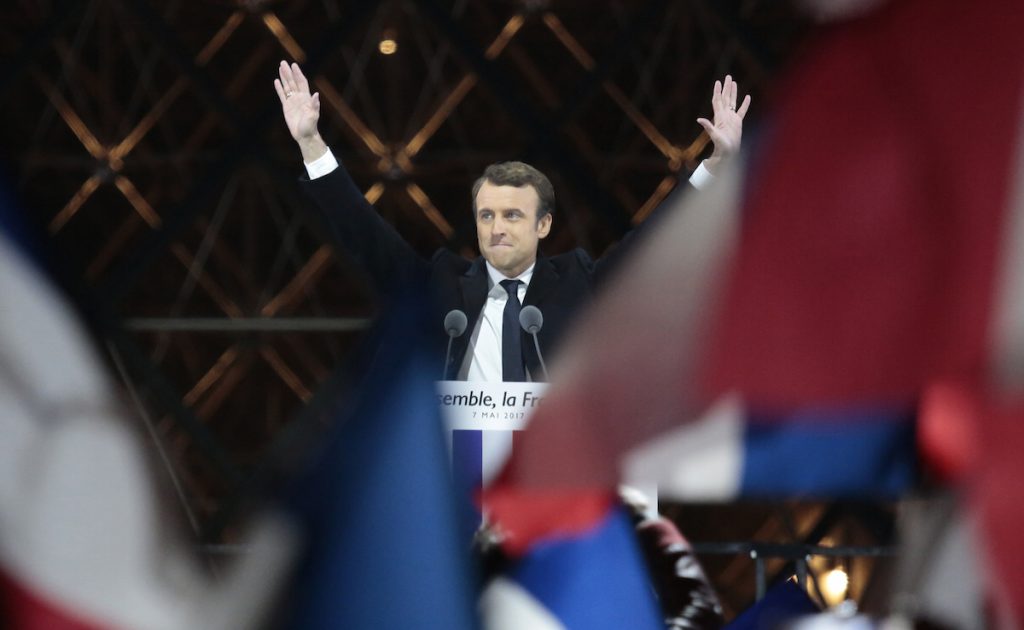 Emmanuel Macron waves to supporters after winning the French Presidential Election, at The Louvre on May 7, 2017 Patrick Aventurier/Getty Images

Posted in: The Daily Edition Top 10