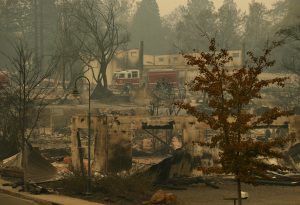 A fire truck drives through an area burned in the wildfire, Tuesday, Nov. 13, 2018, in Paradise, Calif. Five days after flames all but obliterated the Northern California town, officials were unsure of the exact number of missing. But the death toll was almost certain to rise. (AP Photo/John Locher)

Thousands of people spent the week fleeing for their lives, sleeping in cars and shelters, and searching for their loved ones — all the result of still growing wildfires that have destroyed entire towns and become the largest in California history. At least 63 people have died and over 630 people are known to still be missing.

Iconic comic book writer Stan Lee died at the age of 95. Lee played an active role in adapting and ensuring that his legacy as creator of some of Marvel Comics’ most popular superheroes will long outlive him in American and global pop culture.

Fellow entertainment legend Roy Clark, 85, also passed away this week, a country guitarist who had a multi-faceted career, including as host of sketch comedy show “Hee Haw.”

Retail and publishing giant Amazon announced it would split its second headquarters between two host cities: New York’s Long Island City in Queens and Virginia’s Arlington, a DC suburb. They also plan to open a hub in Nashville, Tennessee.

Political drama dominated much of the rest of the week’s major headlines around the world. In the United Kingdom, Prime Minister Theresa May vowed to push ahead with her Brexit plan, which managed to get Cabinet approval — but was followed by a mass exodus of seven ministers who quit in protest.

The Justice Department defended President Trump’s appointment of Matthew Whitaker to replace Jeff Sessions as acting attorney general, a role which some lawmakers argue should be subject to Congressional approval.

The U.S. Treasury Department also issued additional sanctions against 17 Saudis allegedly involved in the murder of U.S.-based Saudi journalist Jamal Khashoggi, freezing their financial assets on top of existing restrictions on their visas. At least five of those implicated could also face the death penalty in Saudi Arabia.

Deputy National Security Adviser Mira Ricardel was terminated from her job after First Lady Melania Trump criticized her and called for her to be fired in a public statement. Ricardel has reportedly been reassigned to an unknown position within the administration.

Top line: “At least 63 people are now dead from a Northern California wildfire, and officials say they have a missing persons list with 631 names on it in an ever-evolving accounting of the victims of the nation’s deadliest wildfire in a century. The high number of missing people probably includes some who fled the blaze and don’t realize they’ve been reported missing, Butte County Sheriff Kory Honea said. He said he’s making the list public so people can see if they are on it and let authorities know they survived. Some 52,000 people have been displaced to shelters, the homes of friends and relatives, to motels — and to a Walmart parking lot and an adjacent field in Chico, a dozen miles away from the ashes.” 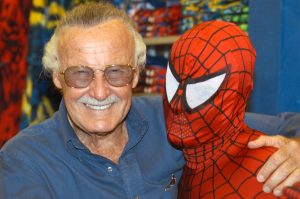 Top line: “If Stan Lee revolutionized the comic book world in the 1960s, which he did, he left as big a stamp — maybe bigger — on the even wider pop culture landscape of today. Think of “Spider-Man,” the blockbuster movie franchise and Broadway spectacle. Think of “Iron Man,” another Hollywood gold-mine series personified by its star, Robert Downey Jr. Think of “Black Panther,” the box-office superhero smash that shattered big screen racial barriers in the process. And that is to say nothing of the Hulk, the X-Men, Thor and other film and television juggernauts that have stirred the popular imagination and made many people very rich. If all that entertainment product can be traced to one person, it would be Stan Lee, who died in Los Angeles on Monday at 95. From a cluttered office on Madison Avenue in Manhattan in the 1960s, he helped conjure a lineup of pulp-fiction heroes that has come to define much of popular culture in the early 21st century.”

Top line: “Roy Clark, the multi-talented musician, Country Music Hall of Fame member and co-host of Hee Haw, died Thursday at home in Tulsa, Oklahoma, of complications from pneumonia. Clark’s publicist confirmed the musician’s death. He was 85. Clark was often quoted as saying, “I grew old on Hee Haw, but I could’ve grown old without it.” He and his longtime co-star on the show, Buck Owens, delivered corn-fed punchlines, which earned the series plenty of eye-rolling ridicule, but the pair, and their many co-stars through the years, also provided a serious showcase for country music. But for Clark, Hee Haw was merely one aspect of a multifaceted career.” 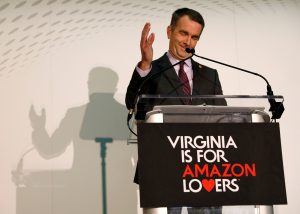 REFILE – CORRECTING TYPO Behind a “Virginia is for Amazon Lovers” sign, Virginia Governor Ralph Northam speaks at a news conference after the announcement that Crystal City has been selected as home to Amazon’s new headquarters in Arlington, Virginia, U.S., November 13, 2018. REUTERS/Kevin Lamarque

Top line: “Amazon’s HQ2 is getting divided by two. Instead of building a massive second headquarters in one location, Amazon announced Tuesday that it would build two offices, one in New York City and another in Northern Virginia near Washington, D.C. The specific locations are the Long Island City neighborhood in Queens and Arlington, Va., where Amazon expects to start hiring in 2019, using temporary space while new campuses get designed and built. Amazon said it will invest a total of $5 billion and that each location would get more than 25,000 jobs, paying an average of more than $150,000.” 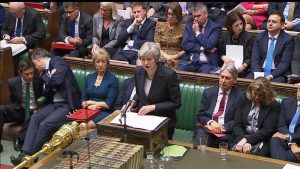 A still image from video footage shows Britain’s Prime Minister Theresa May speaking about Brexit, in the House of Commons, in central London, Britain November 15, 2018. (Parbul TV/Handout via Reuters)

5. Theresa May vows to see Brexit plan through on day of turmoil – The Guardian, Heather Stewart, Pippa Crerar

Top line: “Theresa May pleaded with her party not to plunge Britain into “deep and grave uncertainty” by rejecting her Brexit deal, as she fought to shore up her authority after a bruising day of resignations and backbench mutiny. At a sombre press conference following a dramatic day of turmoil, the prime minister said she believed “with every fibre of my being” that the 585-page agreement unveiled on Wednesday night was “the right one for our country and all our people”. Her defiant Downing Street statement came after an extraordinary 24 hours in Westminster, which included the resignations of two Brexit-leaning cabinet ministers – Dominic Raab, the Brexit secretary, and Esther McVey, the work and pensions secretary – and a string of other junior appointees.”

Top line: “The three leadership elections that took place Wednesday went largely as expected. Kentucky Sen. Mitch McConnell was reelected Majority Leader of the Senate and New York Sen Chuck Schumer is again the Minority Leader. On the House side, Rep. Kevin McCarthy was elected Minority Leader. Looming in the background of all of these contests, however, is the remaining leadership contest, which isn’t expected to take place until after Thanksgiving: The race for the Speaker’s gavel in the House of Representatives, which Democrats will control for the first time in nearly a decade.”

Top line: “The Justice Department defended President Donald Trump’s appointment of acting Attorney General Matthew Whitaker, asserting Wednesday that his senior executive status at the department “unquestionably” authorized him to serve despite his lack of Senate confirmation. The 20-page opinion issued by Justice’s Office of Legal Counsel based its findings on provisions of the Vacancies Reform Act, which allows for the appointment of a senior staffer who had been in office for at least 90 days. Before his appointment, Whitaker served as chief of staff to Attorney General Jeff Sessions, who was fired Nov. 7. The opinion was released after Whitaker’s appointment was attacked by Democrats and some Republicans who argued that even an interim replacement for Sessions requires Senate confirmation.”

Top line: “The Trump administration has sanctioned 17 Saudi officials for their alleged involvement in the killing of Washington Post columnist Jamal Khashoggi, the first economic penalties from the U.S. over the brutal murder that has spawned a diplomatic crisis. The 17 individuals, the U.S. said, are the 15-man hit squad that traveled to Turkey to carry out the operation, the Saudi consul general in Istanbul, Turkey, where the killing took place, and a senior adviser to Crown Prince Mohammed bin Salman. It’s the same list of people that the Saudis themselves have blamed and arrested for the killing, which the Saudi government at first denied, then called an accident, before labeling it a rogue operation. The 17 were also among the 21 Saudi officials that the U.S. already revoked or banned U.S. visas for.”

Top line: “Mira Ricardel, the White House deputy national security adviser, was forced out of her job on Wednesday after President Donald Trump’s wife, Melania, said Ricardel did not deserve the honor of working for her husband. Ricardel “will continue to support the president as she departs the White House to transition to a new role within the administration,” White House spokeswoman Sarah Sanders said in a statement. Sanders did not elaborate on what Ricardel’s new job would be.”

Top line: “Federal judge Timothy J. Kelly sided with CNN on Friday, ordering the White House to reinstate chief White House correspondent Jim Acosta’s press pass. The ruling was an initial victory for CNN in its lawsuit against President Trump and several top aides. The lawsuit alleges that CNN and Acosta’s First and Fifth Amendment rights are being violated by the suspension of Acosta’s press pass. Kelly did not rule on the underlying case on Friday. But he granted CNN’s request for a temporary restraining order. This result means that Acosta will have his access to the White House restored for at least a short period of time. The judge said while explaining his decision that he believes that CNN and Acosta are likely to prevail in the case overall. Kelly made his ruling on the basis of CNN and Acosta’s Fifth Amendment claims, saying the White House did not provide Acosta with the due process required to legally revoke his press pass.”