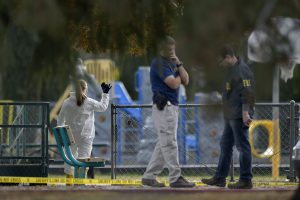 This week, a shooting rampage in Northern California claimed the lives of at least five people and injured 10 others. The gunman was identified as Kevin Janson Neal, who murdered his wife before the shooting incident.

Later in the week the House passed the GOP tax bill with $1.5 trillion overhaul in personal and business taxes. The legislation was considered a win for Republicans who now will attempt to pass similar legislation in the Senate.

A political crisis unfolded in Zimbabwe, where the military took control of the country and put President Robert Mugabe under house arrest. And a 7.3-magnitude earthquake hit the Iran-Iraq border, killing at least 530 people.

Top line: “The gunman, identified by the Tehama County Sheriff’s Office as Kevin Janson Neal, killed his wife, shot neighbors, attacked an elementary school and drove through the small rural community, firing at motorists early on Tuesday morning. He killed a total of five people and injured 10, including seven children, before he was killed by the police. One child who was shot at the school was in critical condition on Wednesday; the other children suffered less serious injuries from flying debris. The shooting rampage lasted around 25 minutes and took place at different locations across the unincorporated community of Rancho Tehama Reserve, Phil Johnston, assistant sheriff of Tehama County, told reporters on Wednesday.”

2. Winners and losers in the tax bill that passed the House – USA Today, Herb Jackson

Young women walk past an armoured personnel carrier that stations by an intersection as Zimbabwean soldiers regulate traffic in Harare on November 15, 2017. Zimbabwe’s military appeared to be in control of the country on November 15 as generals denied staging a coup but used state television to vow to target “criminals” close to President Mugabe. (Photo credit – AFP/Getty Images)

3. Zimbabwe latest: What we know so far – BBC

Top line: “The military in Zimbabwe has taken control of the country, putting veteran President Robert Mugabe under house arrest and announcing it was targeting “criminals” around him. Their move follows the firing last week of Vice-President Emmerson Mnangagwa, which made First Lady Grace Mugabe the frontrunner to succeed her 93-year-old husband. The military has denied it is staging a coup, while Mr Mugabe was pictured smiling beside army chiefs on Thursday and left the house for a scheduled appearance on Friday. But the rapid events raise the possibility that his dominance over a country he has led since independence in 1980 could be at an end.”

Top line: “Iranian officials have raised the death toll from Sunday’s earthquake of 7.3 magnitude on its border with Iraq to at least 530, making it the deadliest in the world this year. The country’s president, Hassan Rouhani, travelled on Tuesday to Kermanshah, the area hardest hit by the earthquake, which was felt hundreds of miles away in both Tehran and Baghdad. Officials in Iran declared Tuesday as a national day of mourning and newspapers broke with tradition to publish their front page headlines in the Kurdish language, in a rare move showing solidarity with the majority-Kurdish areas worst affected.” 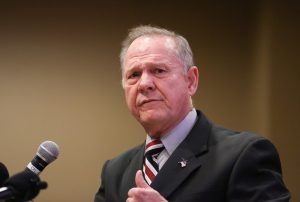 Top line: “ Ever defiant, Republican Roy Moore’s campaign on Thursday lashed out at the women accusing him of sexual misconduct, declaring “let the battle begin.” Women’s advocates decried the talk as worn intimidation tactics in a desperate attempt to keep his imperiled Senate bid alive. Moore ignored mounting calls from Washington Republicans concerned that Moore may not only lose a seat they were sure to win but also may do significant damage to the party’s brand among women nationwide as they prepared for a difficult midterm election season. Moore’s team showed no such concerns.”

Top line: “Days before Nebraska regulators are set to rule on TransCanada Corp.’s XL extension to its Keystone pipeline, the existing conduit has sprung a major leak. It spilled about 5,000 barrels of oil early Thursday in South Dakota, handing new fodder to environmentalists opposed to the XL project. The company shut the line, and foes were quick to respond. The spill “should be a stark reminder of the risk Nebraska would be signing up for,” said Anthony Swift, director of the Natural Resources Defense Council’s Canada Project, a group that opposes the pipeline. “The likelihood of spills should weigh into their decision.”’

Top line: “It was a tale of two hearings, and five long hours, Tuesday on Capitol Hill. Attorney General Jeff Sessions was alternately applauded for his work while encouraged to go further (by Republicans) and grilled (by Democrats) during a sworn question-and-answer session with the House judiciary committee. The hearing did include some cajoling from the GOP members, who put on display their desire for a probe into issues related to Hillary Clinton’s 2016 presidential campaign and time as secretary of state. But the cross-examination from Democrats was testier, as they pressed Sessions for details on Trump and Russia.”

Top line: “President Trump has selected Alex Azar, a former pharmaceutical executive and a top health official during the George W. Bush administration, to lead the Department of Health and Human Services. In announcing that he is nominating Azar to be secretary of the government’s largest civilian department, the president turned to a health policy insider and conservative thinker. Azar spent a decade at Eli Lilly and Co., including five years as president of Lilly USA, its biggest affiliate, before stepping down in January to work as a health-care consultant. He previously was HHS general counsel, then served for two years as the department’s second-in-command.”

Top line: “According to Tweeden, Franken crafted a performance skit during the trip to make the anchor kiss him against her will. “I felt disgusted and violated,” she said of the incident. “I tried to let it go, but I was angry.” Tweeden wrote that after she returned from the overseas trip she discovered a picture of the senator groping her as she slept. Tweeden’s allegations were published Thursday on the radio station’s website accompanied by a picture depicting Franken grabbing the anchor’s breast while she slept aboard a C-17 cargo plane as they departed from Afghanistan. McConnell (R-Ky.) immediately called for the ethics committee to investigate, and Minority Leader Chuck Schumer (D-N.Y.) and Franken himself echoed the need for such a probe.”

Top line: “Richard Cordray, the embattled director of Consumer Financial Protection Bureau, announced Wednesday that he will leave the agency by the end of November. “I am confident that you will continue to move forward, nurture this institution we have built together, and maintain its essential value to the American public,” Cordray wrote in an email to the agency’s staff. Cordray, who has been a tough regulator of banks and other financial institutions, has been a frequent target of Republican lawmakers. Most recently, Congress killed a rule by the bureau that allowed consumers to bring class-action lawsuits against banks and credit card companies to resolve financial disputes.”