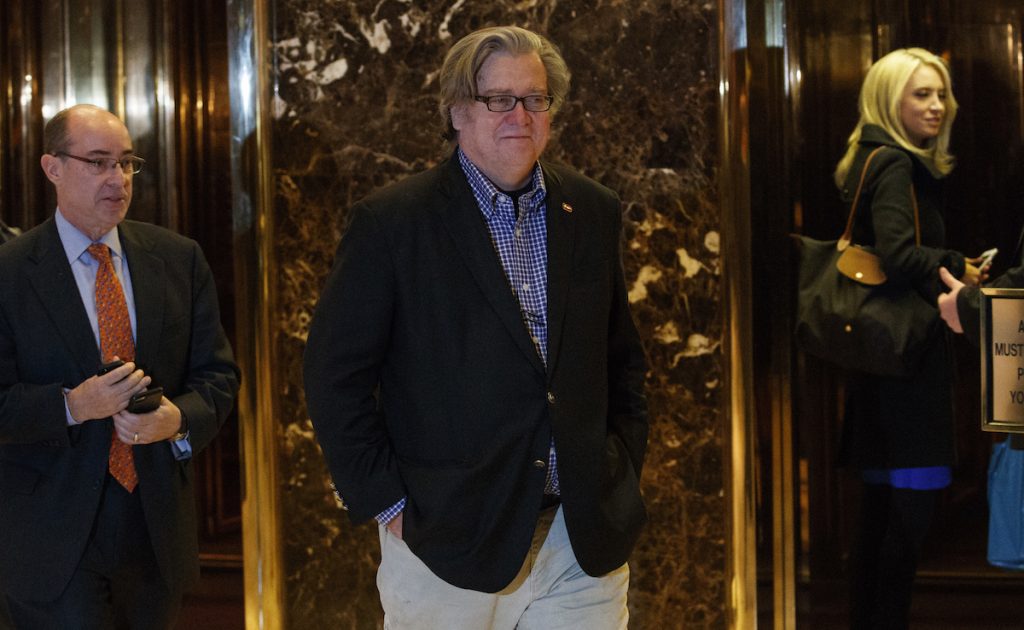 President-elect Donald Trump‘s transition received much of the attention this week. He picked RNC Chairman Reince Priebus as his chief of staff, Breitbart head Steve Bannon as his chief strategist and senior counselor and Lt. Gen. Mike Flynn as his national security adviser. He also announced his intention to nominate Alabama Sen. Jeff Sessions for Attorney General and Kansas Rep. Mike Pompeo as directors of the Central Intelligence Agency. While Trump’s picks made waves in the U.S., President Barack Obama took his final foreign trip as commander in chief. During Obama’s visits to Greece, Germany and Peru he addressed the “anger and fear” of the American people that he said led to the Trump election and sought to shore up U.S. relationships abroad.

Sessions and Flynn were among Trump’s most vocal advocates throughout the campaign and both have made controversial comments about minorities. Pompeo is a conservative firebrand and fierce Obama administration critic.”

Trump’s critics are bashing the Bannon appointment by saying the website he once headed — Breitbart News — traffics in racism and anti-Semitism, while the president-elect and his aides defend the newly appointed chief strategist and senior counselor to the Trump White House.”

Top line: “President Barack Obama issued a warning Tuesday against ‘crude nationalism’ in the wake of Donald Trump’s victory, saying during a news conference on his final overseas trip that the President-elect had tapped into a “troubling” strain of rhetoric playing on Americans’ fears of globalization to win the presidency.

Speaking in Athens, Obama said he recognized an ‘anger and fear in the American population’ over threats of mechanization and globalization, but that Republican officials didn’t use facts when making their case about the US economy.” 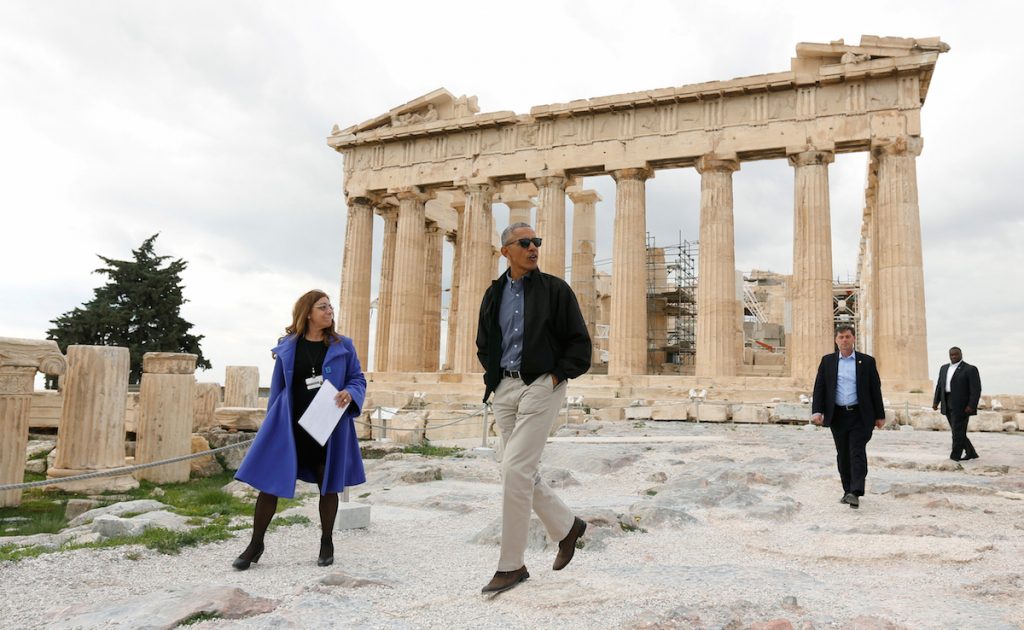 President Barack Obama passes the Parthenon while touring the Acropolis with Dr. Eleni Banou from the Ministry of Culture in Athens, Greece. REUTERS/Kevin Lamarque

Top line: “‘I will admit coming here tonight wasn’t the easiest thing for me,’ Mrs. Clinton said at a gala for the Children’s Defense Fund, where she worked as a young law student. ‘There have been a few times this past week when all I wanted to do is just to curl up with a good book, or our dogs, and never leave the house again.’

In her first public remarks since conceding to President-elect Donald J. Trump last week, Mrs. Clinton told the crowd she was struggling to recover from an unexpected defeat that she said had left nonwhite children and vulnerable people across the nation afraid.”

Top line: “Donald Trump has agreed to pay $25 million to settle fraud lawsuits over his now-defunct Trump University real estate seminar program, despite vowing during the just-concluded presidential campaign that he would never settle the litigation.

The proposed settlement — hammered out in negotiations among Trump lawyers, attorneys pressing federal class-action suits and New York Attorney General Schneiderman — was announced just minutes before a federal judge in San Diego convened a hearing on whether to proceed with a jury trial in one of the cases just 10 days from now.”

Top line: “Russia has said it is formally withdrawing its signature from the founding statute of the international criminal court, a day after the court published a report classifying the Russian annexation of Crimea as an occupation.

The repudiation of the tribunal, though symbolic, is a fresh blow to efforts to establish a global legal order for pursuing genocide, war crimes and crimes against humanity.” 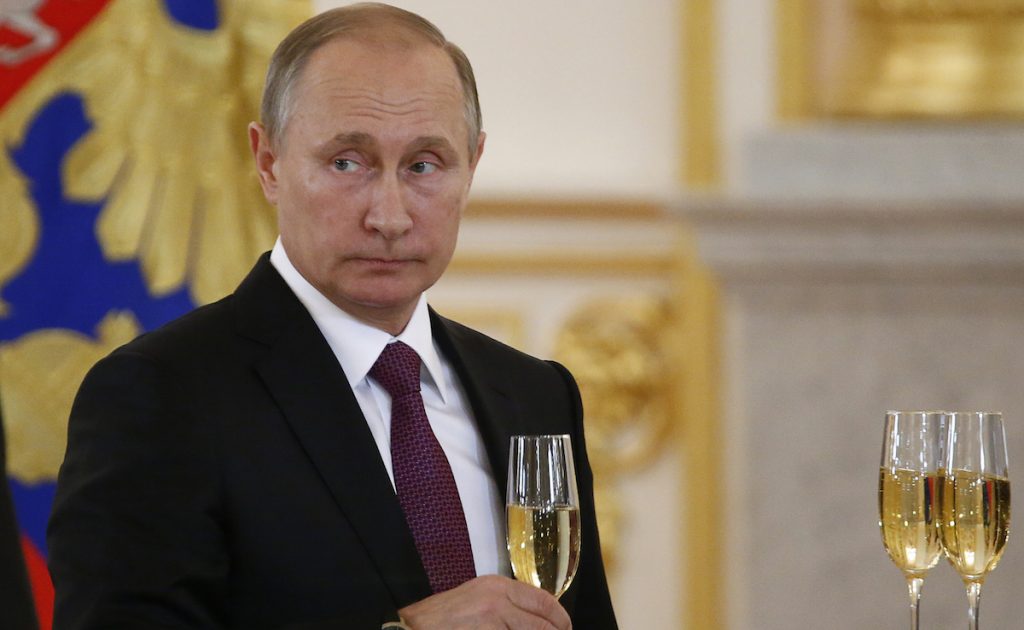 Russian President Vladimir Putin makes a toast during a ceremony for receiving diplomatic credentials from foreign ambassadors in the Kremlin in Moscow, Russia. Sergei Karpukhin/Pool photo via AP

7. Snapchat files for one of the biggest tech IPOs in years: sources—Reuters, Lauren Hirsch and Liana B. Baker

Top line: “Snapchat has filed for an initial public offering, sources familiar with the situation said on Tuesday, which puts the messaging app a step closer to the biggest U.S. stock market debut since 2014.

The Venice, California-based company could go public as soon as March and be valued at $20 billion to $25 billion, making it the largest IPO since Chinese e-commerce giant Alibaba Group Holding Ltd’s (BABA.N) went public two years ago valued at $170.9 billion. It would be the largest U.S. technology IPO since Facebook Inc’s (FB.O) debut in 2012 with a value of $81.2 billion.”

Top line: “JPMorgan Chase and its Hong Kong affiliate have agreed to pay a total of $264 million in fines to settle allegations that the bank hired the friends and relatives of Chinese government officials in exchange for business.

The bank isn’t being formally charged with wrongdoing, but by agreeing to pay the fines, it brings a three-year investigation by the U.S. government to a close.”

Top line: “A Minnesota police officer was charged Wednesday in the shooting death of Philando Castile, the 32-year-old black man who was fatally wounded in a confrontation with police earlier this summer and was shown bleeding in a Facebook Live video taken by his girlfriend…The deadly incident occurred July 6 when Yanez pulled Castile, a school cafeteria employee, over for a broken tail light in Falcon Heights, Minn., a suburb of St. Paul. The officer also said that Castile matched the description of a robbery suspect. Castile reportedly told Yanez that he was carrying a concealed weapon. The aftermath of the shooting was live-streamed on Facebook by Castile’s girlfriend, Diamond Reynolds, who said Castile was reaching for his ID when he was shot. Castile’s death led to a series of protests in the St. Paul area and dozens of arrests following a demonstration along a nearby interstate.”

Top line: “At a peak moment of Ms. Ifill’s broadcasting power, soon after becoming co-anchor of ‘The NewsHour,’ she told the Times: ‘When I was a little girl watching programs like this — because that’s the kind of nerdy family we were — I would look up and not see anyone who looked like me in any way. No women. No people of color.

‘I’m very keen about the fact that a little girl now, watching the news, when they see me and Judy sitting side by side, it will occur to them that that’s perfectly normal — that it won’t seem like any big breakthrough at all.'” 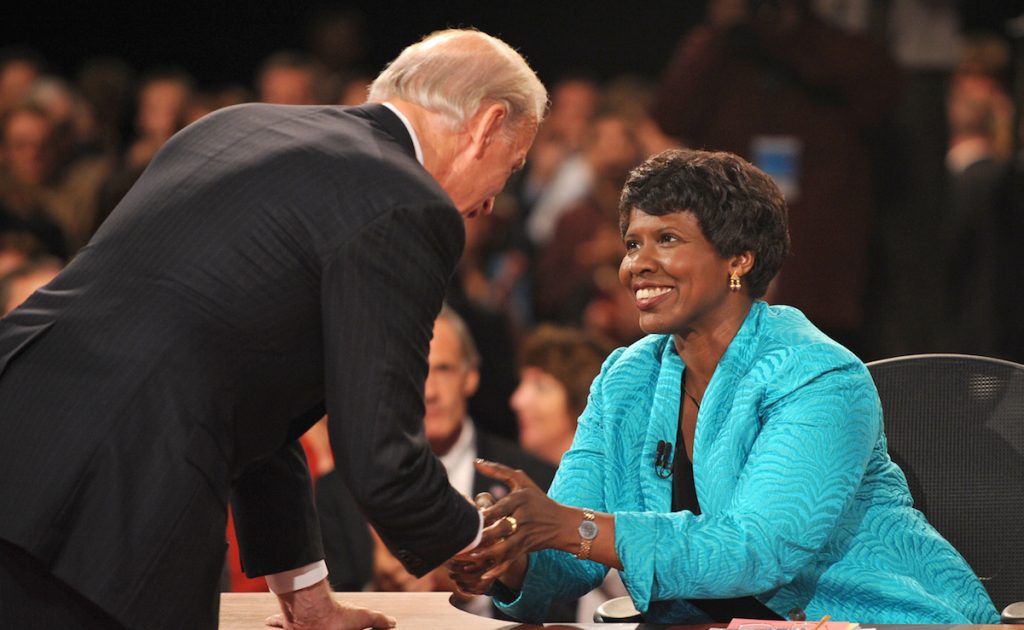 ~GabyS is following the Transition, Inauguration and First 100 Days of the incoming Trump administration