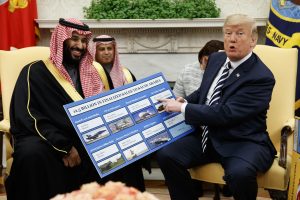 President Donald Trump declared his and the United States’ commitment to continued economic and political ties with Saudi Arabia and its ruling family, despite allegations of the royal family’s direct involvement in the kidnapping and murder of U.S.-based Saudi journalist Jamal Khashoggi. Trump’s statement also sought to cast doubt on the CIA’s findings that all available evidence points to the Saudi crown prince’s involvement.

Japanese automaker Nissan ousted its chairman, Carlos Ghosn, following reports of filing false earnings reports, using company resources for personal use, and other acts of financial misconduct. The board’s decision came shortly after Ghosn was arrested by law enforcement and threw a wrench in economic and business plans in both Japan and France, which owns a stake in Nissan’s majority shareholder, Renault.

Much of the rest of the week’s major headlines also dealt with politics. Here in Washington, Congresswoman Nancy Pelosi continued her slow-and-steady campaign to serve again as Speaker of the House after Democrats won control of the House of Representatives.

First daughter and senior adviser to the president Ivanka Trump also faced scrutiny after it was revealed that she used a private email server for official White House correspondence through much of 2017 — an act that her father repeatedly criticized lambasted Hillary Clinton for doing during her time as secretary of state.

President Trump also engaged in a war of words with Chief Justice John Roberts of the Supreme Court, who issued a rare public statement challenging Trump’s assertion that a California judge who temporarily blocked his asylum restrictions was a partisan “Obama judge.”

House Republicans issued subpoenas for former FBI Director James Comey and former Attorney General Loretta Lynch, calling on them to testify in private, closed-door hearings about the FBI’s actions during the 2016 presidential election. Comey announced he would only testify if the hearings are public.

In business news, Amazon admitted that some customer names and emails had been leaked due to a “technical error,” but that the glitch had been fixed. However, the company didn’t provide further details.

In international news, the United Kingdom and European Union agreed on a draft Brexit deal for how Britain would exit the EU next year, but the deal still requires approval from Prime Minister Theresa May’s cabinet, which has seen numerous resignations in protest.

And Israel is suing and calling on the U.S. government to intervene after American home-sharing company Airbnb decided to remove all listings located in the West Bank amid concerns about supporting controversial Israeli settlements in the area.

Top line: “President Trump defied the nation’s intelligence agencies and a growing body of evidence on Tuesday to declare his unswerving loyalty to Saudi Arabia, asserting that Crown Prince Mohammed bin Salman’s culpability for the killing of Jamal Khashoggi might never be known. In a remarkable statement that appeared calculated to end the debate over the American response to the killing of Mr. Khashoggi, the president said, “It could very well be that the crown prince had knowledge of this tragic event — maybe he did and maybe he didn’t! . . .In any case, our relationship is with the Kingdom of Saudi Arabia.” His statement, which aides said Mr. Trump dictated himself and reflected his deeply held views, came only days after the C.I.A. concluded that the crown prince, a close ally of the White House, had authorized the killing of Mr. Khashoggi, a Saudi journalist and columnist for The Washington Post.” 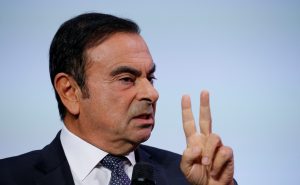 Carlos Ghosn, chairman and CEO of the Renault-Nissan-Mitsubishi Alliance, attends the Tomorrow In Motion event on the eve of press day at the Paris Auto Show, in Paris, France, October 1, 2018. Picture taken October 1, 2018. REUTERS/Regis Duvignau

Top line: “The board of Japanese auto giant Nissan has voted to remove Carlos Ghosn from the role of Chairman and Representative Director. Nissan said on its website Monday that it will now form an advisory committee to propose nominations from the board of directors for Ghosn’s replacement. A separate committee to review Nissan’s governance and executive pay is also to be created. In an explosive press conference Monday, Saikawa said that “over many years” Ghosn and Representative Director, Greg Kelly, had been under-reporting compensation amounts to the Tokyo Stock Exchange securities report. Nissan added that, in regards to Ghosn, “numerous other significant acts of misconduct have been uncovered, such as personal use of company assets.” The company said Ghosn had also made inappropriate investments.”

3. What we know about Nancy Pelosi’s House Speaker bid and why some Democrats oppose her – USA Today, Christal Hayes, Deborah Barfield Berry

Top line: “It’s been a whirlwind of ups and downs for Rep. Nancy Pelosi, who is fighting with those in her own party to lead Democrats in the House they now control. Pelosi is hoping to get her old job as speaker of the House back in the face of opposition from a growing group of Democrats who want new leadership for the party instead of the California Democrat, who was the first woman speaker of the House while serving in the role during the Obama Administration. Here’s what we know about Pelosi’s bid for speaker and why it’s gotten so much attention.” 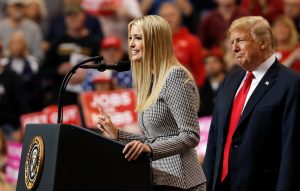 Top line: “Ivanka Trump sent hundreds of emails last year to White House aides, Cabinet officials and her assistants using a personal account, many of them in violation of federal records rules, according to people familiar with a White House examination of her correspondence. White House ethics officials learned of Trump’s repeated use of personal email when reviewing emails gathered last fall by five Cabinet agencies to respond to a public records lawsuit. That review revealed that throughout much of 2017, she often discussed or relayed official White House business using a private email account with a domain that she shares with her husband, Jared Kushner. The discovery alarmed some advisers to President Trump, who feared that his daughter’s prac­tices bore similarities to the personal email use of Hillary Clinton, an issue he made a focus of his 2016 campaign. He attacked his Democratic challenger as untrustworthy and dubbed her “Crooked Hillary” for using a personal email account as secretary of state.” 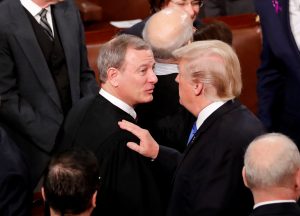 Top line: “As of Thursday morning, President Trump was still ruminating on a rare upbraiding from Supreme Court Chief Justice John Roberts, continuing attacks against the 9th Circuit Court of Appeals and calling it “a complete & total disaster.” The Twitter missives and subsequent televised remarks picked up a thread that began on Wednesday following a ruling by U.S. District Judge Jon Tigar, who issued a temporary restraining order against Trump’s asylum policy earlier this week saying the administration must consider all asylum claims regardless of where migrants enter the country. Tigar is not a judge on the 9th Circuit. He is a district court judge who sits in San Francisco. Displeased by the decision, the president called it a “disgrace” in an off-the-cuff news conference, adding, “this was an Obama judge and I’ll tell you what, it’s not going to happen like this anymore.” That’s when Roberts entered the fray.”

Top line: “Amazon’s renowned secrecy encompasses its response to a new security issue, withholding info that could help victims protect themselves. Amazon emailed users Tuesday, warning them that it exposed an unknown number of customer email addresses after a “technical error” on its website. When reached for comment, an Amazon spokesperson told TechCrunch that the issue exposed names as well as email addresses. “We have fixed the issue and informed customers who may have been impacted.” The company emailed all impacted users to be cautious. In response to a request for specifics, a spokesperson said the company had “nothing to add beyond our statement.” The company denies there was a data breach of its website of any of its systems, and says it’s fixed the issue, but dismissed our request for more info including the cause, scale and circumstances of the error.”

Top line: “An attorney for former FBI Director James Comey said Thursday his client will fight a subpoena to privately testify before Congress next month about FBI actions in the 2016 campaign. House Judiciary Chairman Bob Goodlatte officially issued subpoenas for Comey and former Attorney General Loretta Lynch after the committee signaled their intention to do so earlier this month. Goodlatte, a Virginia Republican who is retiring, is requesting private depositions from Comey on December 3 and Lynch on December 4. The investigation will end when Democrats take over the committee in January. Soon after the subpoena was issued, Comey reiterated his call for a public hearing.”

9. U.K. and EU Agree Brexit Deal in a Draft That Hands Wins to May – Bloomberg, Ian Wishart

Top line: “The U.K. and the European Union have agreed to the final bit of their Brexit deal, setting out a vision for close economic ties in a draft that hands Prime Minister Theresa May some key political wins. May’s challenge now is to convince a skeptical Parliament to back it in a vote that will probably take place next month. She’s already hitting on her best argument to win over politicians: Voters want it done and they care little for the dramatic party politics that has dogged the Brexit debate since the historic referendum in 2016.”

Top line: “Interpol has elected South Korean Kim Jong-yang as its president, rejecting the controversial Russian frontrunner. Mr Kim was chosen by Interpol’s 194 member states at a meeting of its annual congress in Dubai. He beat Russia’s Alexander Prokopchuk, who has been accused of using Interpol’s arrest warrant system to target critics of the Kremlin. Russia blamed the outcome of the voting on “unprecedented pressure and interference”. The election follows the disappearance of Interpol’s former president Meng Hongwei, who vanished on a trip to China in September. Beijing has since confirmed he has been detained and is being investigated for allegedly taking bribes.”

Top line: “Lawyers launched a class action lawsuit in Israel on Thursday against Airbnb, accusing the company of “outrageous discrimination” and demanding monetary damages after it withdrew listings of Israeli settlements in the occupied West Bank. The San Francisco-based company said this week it was removing listings of around 200 homes in settlements after hearing criticism from people who “believe companies should not profit on lands where people have been displaced”.”

~ HeatherC is reading Breaking Down Thanksgiving, by The Atlantic