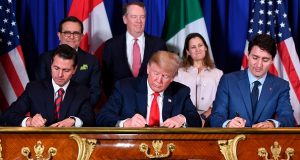 Mexico’s President Enrique Pena Nieto (L) US President Donald Trump (C) and Canadian Prime Minister Justin Trudeau, sign a new free trade agreement in Buenos Aires, on November 30, 2018, on the sidelines of the G20 Leaders’ Summit. – The revamped accord, called the US-Mexico-Canada Agreement (USMCA), looks a lot like the one it replaces. But enough has been tweaked for Trump to declare victory on behalf of the US workers he claims were cheated by NAFTA. (Photo by SAUL LOEB / AFP / Getty Images)

The leaders of the United States, Canada and Mexico signed a trade pact meant to replace the North American Free Trade Agreement. Dubbed the United States Mexico Canada Agreement, the trilateral agreement comes after over a year of contentious negotiations over wording and details. It still faces approval by all three countries’ legislatures  — a process that could take another year — before being ratified.

President Donald Trump’s former long-time personal lawyer, Michael Cohen, pleaded guilty to new charges of lying to the FBI and special counsel Robert Mueller as part of the Russia investigation. Specifically, Cohen now claims he and Trump did, in fact, work with Russians towards securing a real estate deal at the same time that Trump was campaigning for president.

The news of Cohen’s plea deal came on the heels of ex-Trump campaign chairman Paul Manafort standing accused by Mueller of lying to investigators in violation of his plea agreement. It is not publicly known what exactly Manafort allegedly lied about.

NASA’s latest mission to Mars was successful, with the InSight lander making a “wild” journey to Martian soil, where it will now dig beneath the surface in order to map the red planet’s subterranean levels.

A Chinese geneticist claimed that he had successfully created the world’s first gene-edited babies, twin girls who he says cannot contract HIV. The global scientific community reacted with outrage to the potential violation of rules restricting the editing of human genes. The professor, He Jiankui, defended his work and claimed another gene-edited pregnancy is underway and is now under investigation by both his university and Chinese officials, who announced they have halted his work.

In U.S. politics, Mississippi residents elected Republican Cindy Hyde-Smith as their new senator, over her Democratic opponent Mike Espy. The race was contentious, fraught with racial politics after Hyde-Smith referenced lynchings and made other controversial comments. She is the state’s first female U.S. Senator.

Democrats nominated Minority Leader Nancy Pelosi to be the next speaker of the House of Representatives, all but confirming her status as the most powerful woman in Congress ever since she became the first female speaker in 2007. Pelosi faces a vote by the full House in January and must overcome growing internal opposition from Democrats seeking a fresher, less controversial face as their leader.

Two major companies had a tough week, with General Motors announcing plans to cut costs by eliminating roughly 14,000 jobs — 15 percent of its salaried workforce — and halting production at five of its factories, including ones in Ohio, Michigan, Maryland, and Canada’s Ontario. Hotel giant Marriott International then revealed a data breach possibly affecting 500 million customers of its recently acquired Starwood Hotels brand.

The world is failing at addressing the worst human-caused contributions to climate change, announced a United Nations report, which also found that the commitments made under the 2015 Paris Agreement — which the U.S. withdrew from earlier this year — is not enough to stave off irreversible damage to the Earth, unless additional measures are taken.

Top line: “The United States, Canada and Mexico signed a North American trade pact on Friday, and President Donald Trump brushed aside difficulties he may have in getting the deal through U.S. Congress, where the opposition Democrats will control one of its two chambers from January. The leaders of the three countries agreed on a deal in principle to govern more than a trillion dollars of mutual trade after a year and a half of acrimonious negotiations concluded with a late-night bargain just an hour before a deadline on Sept. 30. Canada and Mexico bickered with the United States over the wording and the finer points of the trilateral deal and still had not agreed just hours before officials were due to sit down and sign it as the G20 summit kicks off in Buenos Aires.” 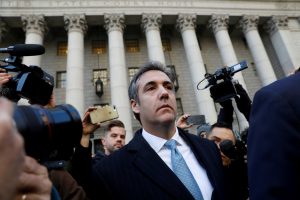 Top line: “President Trump’s former personal attorney Michael Cohen pleaded guilty Thursday in New York to lying to Congress about a Moscow real estate project that Trump and his company pursued at the same time he was securing the GOP nomination in 2016. In a nine-page filing, prosecutors laid out a litany of lies that Cohen admitted he told lawmakers in Congress about the Moscow project — an attempt, Cohen said, to minimize links between the proposed development and Trump as his presidential bid was gaining steam.” 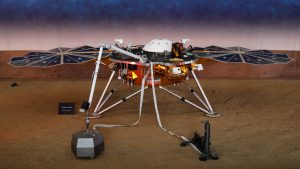 Top line: “After a 205-day journey through space, NASA’s InSight lander is safely on the surface of Mars. Tasked with peering beneath the Martian surface and mapping the planet’s underworld, InSight touched down at 2:52 p.m. ET in a sunny patch of boring landscape inside the equatorial plains of Elysium Planitia. Anxious teams of scientists and engineers, clustered together at the Jet Propulsion Laboratory in California, knew the spacecraft had survived its wild and tricky descent to the red planet’s surface after receiving data suggesting the lander had touched down safely—followed by an image from InSight itself showing a dusty, alien horizon with a single robot foot.” 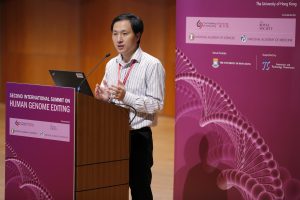 He Jiankui, a Chinese researcher, speaks during the Human Genome Editing Conference in Hong Kong, Wednesday, Nov. 28, 2018. He made his first public comments about his claim to have helped make the world’s first gene-edited babies. (AP Photo/Kin Cheung)

Top line: “China has halted the work of the scientist who claims to have created the world’s first genetically edited babies, and says it will investigate. He Jiankui caused outrage earlier this week when he told a genome summit he had altered the genes of twin baby girls so they could not contract HIV. His statement has not been confirmed, but if true breaks tight rules around the use of gene editing in humans. Prof He’s university said it was unaware of his experiment. On Thursday, China’s science ministry said it had “demanded that the relevant organisation suspend the scientific activities of relevant personnel”. The National Health Commission has already said Prof He’s work “seriously violates China’s laws, regulations and ethical standards” and would investigate the claims.”

Top line: “Republican Cindy Hyde-Smith’s victory in Mississippi’s Senate election runoff was closer than usual in the GOP-dominated Deep South state. But she still was never really threatened by Democrat Mike Espy in Tuesday’s contest, which brought the state’s long history of racial politics into sharp relief. Some takeaways as Hyde-Smith, who was initially appointed to succeed former Sen. Thad Cochran, returns to Washington as the first woman elected to represent Mississippi on Capitol Hill.” 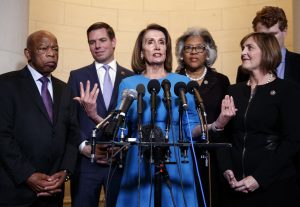 Top line: “House Democrats nominated Minority Leader Nancy Pelosi to serve as the next speaker of the House. If approved by the full House, Pelosi would again wield the gavel in January — a dozen years after she became the first female speaker in 2007. The vote was 203 voting for Pelosi, 32 opposing her and three members leaving their ballot blank. One member was absent. After more than a year of party angst about needing fresh and younger faces in leadership, House Democrats will almost certainly emerge from their internal caucus election with the same three people in its top three posts: Nancy Pelosi, Steny Hoyer and James Clyburn.”

Top line: “Special counsel Robert Mueller alleged Monday that former Trump campaign chief Paul Manafort lied to investigators, violating his plea agreement, according to a court filing. Manafort, meanwhile, “believes he has provided truthful information and does not agree with the government’s characterization or that he has breached the agreement,” according to the filing. The filing notes that Manafort’s alleged breach maintains all of his obligations under the deal, but relieves the special counsel of its own duties – “including its agreement to a reduction in the Sentencing Guidelines for acceptance of responsibility.””

Top line: “General Motors announced Monday that it planned to idle five factories in North America and cut roughly 14,000 jobs in a bid to trim costs. It was a jarring reflection of the auto industry’s adjustment to changing consumer tastes and sluggish sales. The move, which follows job reductions by Ford Motor Company, further pares the work force in a sector that President Trump had promised to bolster. Referring to G.M.’s chief executive, Mary T. Barra, he told reporters, “I spoke to her and I stressed the fact that I am not happy with what she did.” In addition to an assembly plant in Lordstown, Ohio, the cuts affect factories in Michigan, Maryland and the Canadian province of Ontario.”

Top line: “Marriott says its guest reservation system has been hacked, potentially exposing the personal information of approximately 500 million guests. The hotel chain said Friday the hack affects its Starwood reservation database, a group of hotels it bought in 2016 that includes the St. Regis, Westin, Sheraton and W Hotels. Marriott said hackers had gained “unauthorized access” to the Starwood reservation system since 2014, but the company only identified the issue last week. For 327 million people, Marriott says the guests’ exposed information includes their names, phone numbers, email addresses, passport numbers, date of birth and arrival and departure information. For millions others, their credit card numbers and card expiration dates were potentially compromised. Marriott warns that it can’t confirm if the hackers were able to decrypt the credit card numbers.”

Top line: “Countries are failing to take the action needed to stave off the worst effects of climate change, a UN report has found, and the commitments made in the 2015 Paris agreement will not be met unless governments introduce additional measures as a matter of urgency. New taxes on fossil fuels, investment in clean technology and much stronger government policies to bring down emissions are likely to be necessary. Governments must also stop subsidising fossil fuels, directly and indirectly, the UN said.”