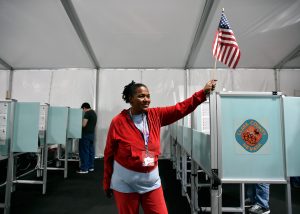 LAS VEGAS, NV – NOVEMBER 06: Election worker Robin Wright guides voters to available voting machines on November 6, 2018 in Las Vegas, Nevada. Turnout is expected to be high nationwide as Democrats hope to take back control of at least one chamber of Congress. (Photo by David Becker/Getty Images)

After months of campaigning and “get-out-the-vote” efforts, the midterm elections came and went this week, but not before resulting in historic voter turnout and a shift in the balance of power in Congress — Democrats took control of the House of Representatives, while Republicans managed to retain a majority in the Senate. Some races are still too close to call.

A gunman and former Marine walked into a bar in Thousand Oaks, California, and opened fire, killing 12 people and injuring dozens more before shooting himself. It was the latest in a string of mass shootings to hit U.S. communities in the two weeks since the Pittsburgh synagogue shooting, and came almost exactly a year after the attack on concertgoers in Las Vegas — some survivors of which were also present at the bar.

The United States reimposed sanctions on Iran and any nation that does business with them, but issued temporary waivers to eight countries. The Trump administration called it the biggest sanctions action ever taken against Iran, with whom the U.S. has had increased tension before and after leaving the Iran nuclear deal earlier this year.

President Trump signed a proclamation barring asylum to anyone who does not enter the country via an official port of entry. The move faces legal challenges as it contradicts existing U.S. law.

A federal judge in Montana ordered a halt to construction of the Keystone XL oil pipeline pending further review of environmental impacts. The ruling is a blow to President Trump and oil industry efforts to build the pipeline between the U.S. and Canada.

Following snowballing allegations of ongoing sexual abuse and cover-ups by coaches, doctors, and other staff with USA Gymnastics, the U.S. Olympic Committee moved to revoke the organization’s status as national governing body over the sport.

In other tech news, Samsung revealed a new foldable phone, upgrades to its Bixby platform and other product updates, and Tesla announced the appointment of Australian telecoms executive Robyn Denholm as its new chairperson, replacing founder Elon Musk following a string of ongoing legal and public relations issues.

Top line: “While Democrats didn’t secure the so-called “blue wave” across both chambers, the midterm results will certainly bring a sea-change to Washington. Democrats, who needed to net 23 seats to take the House, are expected to surpass that number by more than 10, flipping the chamber blue. But in the Senate, Republicans not only maintained their majority — they bolstered it, with key victories projected in senate races in Indiana, North Dakota and Missouri.” 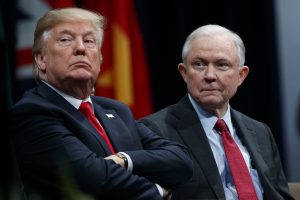 Top line: “President Donald Trump on Wednesday fired Attorney General Jeff Sessions. “At your request I am submitting my resignation,” Sessions wrote in a letter to White House chief of staff John Kelly. Matthew Whitaker will take over as acting attorney general, the President said. Whitaker is expected to take charge of the Russia investigation and special counsel Robert Mueller from Deputy Attorney General Rod Rosenstein. Whitaker has been openly critical of Mueller and the investigation and Democrats immediately called on him to recuse himself, just as Sessions had.” 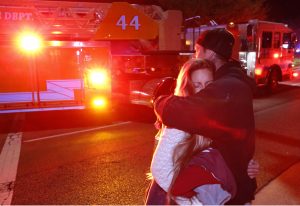 THOUSAND OAKS, CA – NOVEMBER 08: Molly Esterline is hugged by David Crawford on scene after a shooter wounded seven Wednesday night on November 8, 2018 in Thousand Oaks, California. The gunman burst into the bar around 11:20 p.m., cloaked in all black as he threw smoke bombs and began shooting at targets as young as 18 inside the Borderline Bar & Grill, authorities and witnesses said. (Photo by Al Seib / Los Angeles Times via Getty Images)

3. Everything We Know About the Mass Shooting in Thousand Oaks, California – The Cut, Sarah Nechamkin

Top line: “A gunman entered a bar packed with college students in Southern California’s Thousand Oaks late Wednesday night, firing multiple shots and killing at least 12 people — and himself. The suspect has been identified as a 28-year-old white man and former marine, and was recently accused of sexual-assault by his high school track coach. Details about the horrific mass shooting are still coming in, but here’s what we know so far.”

Top line: “The Trump administration called it the biggest sanctions action the United States had ever undertaken against Iran. Iran’s president called it an act of “economic war” and said his country would win. The package of severe economic penalties imposed against Iran on Monday by the United States is the most significant part of President Trump’s decision last May to abandon the Iranian nuclear agreement of 2015, which he has described as a disaster. The penalties include some gaping exceptions that could undermine their impact, among them: Iran’s biggest petroleum customers, like China and India, will not be penalized, at least for six months.”

Top line: “The Trump administration introduced new measures Thursday to deny asylum to migrants who enter the country illegally, invoking national security powers to curb long-standing humanitarian protections for foreigners arriving on American soil. The restrictions will invoke authorities used by President Trump to implement his “travel ban” in early 2017, according to senior administration officials who outlined them, and apply indefinitely. The measures are expected to face swift legal challenges. Immigrant advocacy groups insist that U.S. laws clearly extend asylum protections to anyone who reaches the United States and expresses a fear of persecution, no matter how they enter the country.”

Top line: “A U.S. district judge has issued an order blocking construction of the controversial transnational Keystone XL Pipeline until the State Department conducts further study of its impact on the environment. Judge Brian Morris’ 54-page order, issued late Thursday, overturns the Trump administration’s approval last year of the proposed 1,179-mile pipeline and at least temporarily prevents it from being built. Although the decision does not permanently halt the pipeline’s construction, it nevertheless comes as TransCanada, the Canadian company that owns Keystone, is preparing to start construction in Montana, shipping pipe to various locations throughout the state, the Great Falls Tribune reports.” 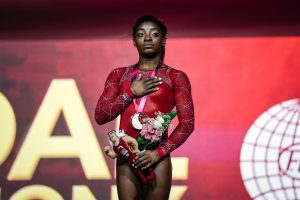 Simone Biles of  United States with her gold for Floor at the Aspire Dome in Doha, Qatar, Artistic FIG Gymnastics World Championships on 3 of November 2018. (Photo by Ulrik Pedersen/NurPhoto via Getty Images)

7. What we know about USA Gymnastics situation: What’s next in USOC process? – USA Today, Rachel Axon

Top line: “Now that the U.S. Olympic Committee has started the process to revoke recognition from USA Gymnastics as the national governing body for the sport, questions remain about the organization’s future and the path forward for the athletes. Here’s what we do know.”

Top line: “Google is making changes to its sexual harassment and misconduct policies — including ending forced arbitration in such cases — a week after a global employee walkout. CEO Sundar Pichai sent a memo to staff Thursday pledging “more transparency” on how it handles employee concerns and provide “better support and care to the people who raise them.” Google “will double down” on its commitment to be a representative, equitable and respectful workplace, he said. Pichai’s letter announced improvements to sexual harassment reporting and training, and emphasized the company’s commitment to diversity. Google will consolidate its channels for reporting misconduct into one site with live support, the company said. It also will provide “extended counseling and career support” for employees making allegations of sexual misconduct.”

Top line: “Samsung offered a first look at its concept foldable phone. But if you blinked or looked away, you might have missed it. The foldable phone, easily the biggest reason people tuned into the company’s annual developer conference, showed up courtesy of Samsung executive Justin Denision, who pulled the device out of his jacket pocket and unfolded it. The stage lights were dimmed and Denison only showed it off for a little while after a flashy introductory video. Samsung kicked off the day with a lengthy discussion of Bixby, and some of the new capabilities coming to the digital assistant. The event is intended to drum up software support for the company’s vast portfolio of products, from smartphones to smart refrigerators.”

Top line: “Tesla has named an Australian executive as its new chairman after Elon Musk was forced to give up the role. Robyn Denholm, the finance chief of Australian telecoms firm Telstra, takes over from the electric car maker’s founder, who remains chief executive. Mr Musk agreed to step down as chair last month to resolve claims of fraud brought by US financial regulators. The settlement requires Tesla to install an independent chairman, among other penalties. The announcement scotches reports that James Murdoch was the frontrunner for the job. Tesla has endured a difficult few months, following comments Mr Musk made on social media in early August suggesting he had “funding secured” for a deal to take Tesla private.”

~HeatherC is reading about How We’ll Win: The Other Half by Quartz