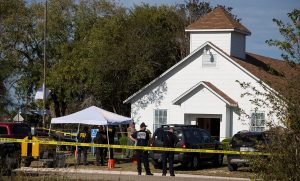 The week began with a deadly shooting at the First Baptist Church in Sutherland Springs, Texas, when a gunman fired multiple rounds into the congregation gathered for Sunday’s morning services. The massacre claimed the lives of at least 26 parishioners, making it the deadliest mass shooting in Texas. Many of the victims who died in the massacre were children.

The shooter was identified as Devin Patrick Kelley, 26, who died moments later of a self-inflicted gunshot wound. Kelley had a long, troubled past, which included “divorce, domestic battery and a failed U.S. Air Force career that ended with time in military prison.”

President Donald Trump remained front and center of the news this week as he embarked on his first Asia trip. Trump began the trip in Japan where he held a joint press conference with Japanese Prime Minister Shinzo Abe, gave a speech at the South Korea’s National Assembly, praised China’s President Xi Jinping on trade and pitched “America First” trade policy at the APEC Summit in Vietnam.

Trump’s next stop is Philippines where he will participate in the 50th anniversary celebrations of the Association of Southeast Asian Nations (ASEAN).

Also in the news was the newly unveiled tax proposal by Senate GOP, tensions between DOJ and AT&T over Time Warner deal and the latest revelations from the Paradise Papers.

Top line: “At least 26 people were killed in Sunday’s church shooting in Sutherland Springs, Texas, Gov. Greg Abbott said at a press conference. About 20 others were wounded, said Freeman Martin, a regional director with the Texas Department of Public Safety, with victims ranging in age from 5 to 72 years old. Authorities have not said what may have motivated the suspected shooter, who was later found dead in his vehicle.” 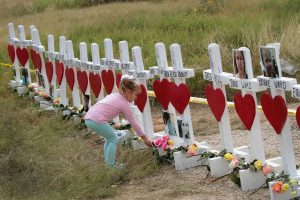 SUTHERLAND SPRINGS, TX – NOVEMBER 09: Four-year-old Shaelyn Gisler leaves a flower at a memorial where 26 crosses were placed to honor the 26 victims killed at the First Baptist Church of Sutherland Springs on November 9, 2017 in Sutherland Springs, Texas. On November 5, a gunman, Devin Patrick Kelley, shot and killed the 26 people and wounded 20 others when he opened fire during Sunday service at the church. (Photo by Scott Olson/Getty Images)

Top line: “It was like any other Sunday morning inside of their tiny Texas church, until a gunman’s unexplained rampage stole the lives of 26 people: mothers, fathers, siblings, grandparents and more than a dozen children. By the time the last bullet was fired, the victims — ranging from a pregnant woman and her unborn child to a 77-year-old grandfather — were left to die inside the First Baptist Church in Sutherland Springs. The tragedy shattered the rural community’s sense of peace, as it became the deadliest shooting inside a house of worship in modern U.S. history.” 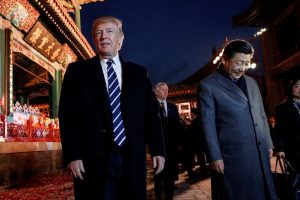 President Trump and China’s President Xi Jinping after an opera performance at the Forbidden City in Beijing. REUTERS/Jonathan Ernst

Top line: “President Donald Trump delivered a sharp warning to North Korea Wednesday, telling the rogue nation: “Do not underestimate us. And do not try us.” In a speech delivered hours after he aborted a visit to the heavily fortified Korean demilitarized zone due to bad weather, Trump said he had a message for North Korean leader Kim Jong Un.“The weapons you are acquiring are not making you safer, they are putting your regime in grave danger,” Trump told an audience of South Korean lawmakers, calling on all nations to join forces “to isolate the brutal regime of North Korea.” “The world cannot tolerate the menace of a rogue regime that threatens with nuclear devastation,” he said.” 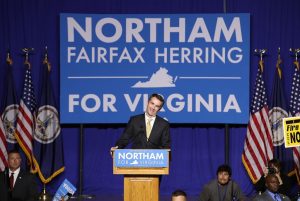 Top line: “Republicans are still counting the upsets and losses in Tuesday’s local races. The defeat in Virginia has been analyzed plenty; it’s races further down the ballot, especially in suburbs, that have made Democrats grow more confident about the 2018 midterms.”

Top line: “The Senate bill differs significantly from the House version approved by the Ways and Means committee on Thursday: It would preserve some popular tax breaks, including ones for mortgage interest and medical expenses, and would maintain a bottom tax rate of 10 percent for lower earners. But it would also jettison the state and local tax deduction entirely and delay the enforcement of a 20 percent corporate tax rate until 2019, which could rankle the White House and mute the economic growth projections that Republicans are counting on to blunt the cost of the tax cuts.”

6. Paradise Papers: Everything you need to know about the leak – BBC

Top line: “The Paradise Papers are a huge leak of financial documents that throw light on the top end of the world of offshore finance. A number of stories are appearing in a week-long expose of how politicians, multinationals, celebrities and high-net-worth individuals use complex structures to protect their cash from higher taxes. As with last year’s Panama Papers leak, the documents were obtained by the German newspaper Süddeutsche Zeitung, which called in the International Consortium of Investigative Journalists (ICIJ) to oversee the investigation.”

Top line: “U.S. antitrust regulators from the Department of Justice have reportedly demanded that AT&T and Time Warner Cable sell off Turner Broadcasting, the major cable group that includes CNN, in order to complete the companies’ $85.4 billion merger deal. The surprising requirement for approving the planned acquisition has spurred contentious negotiations between the DOJ and AT&T, as well as criticism among the public and the threat of litigation from AT&T.”

Top line: “Louis C.K broke his silence on the sexual misconduct allegations made against him by five women with a lengthy statement Friday. Last year, Louis C.K. had denied industry whispers of misconduct in an interview, saying, “they’re rumors, that’s all that is.” Since The New York Times report on Thursday, Louis C.K.’s business partners have issued statements distancing themselves from the comedian to varying degrees. Netflix canceled an upcoming planned stand-up special (but will keep his previous specials), HBO pulled his content from its On Demand library, FX has cut ties with C.K. from all of his shows on their network, his publicist Lewis Kay has separated from him, and The Orchard has scrapped its plan to distribute his film, I Love You, Daddy.”

Top line: “Alabama Republican Roy Moore denied committing sexual misconduct in a new statement Friday afternoon, continuing a furious response to the new accounts of four women who said Moore pursued relationships with them when they were teenagers and he was in his 30s. “I have never provided alcohol to minors, and I have never engaged in sexual misconduct,” Moore said in the statement. “As a father of a daughter and a grandfather of five granddaughters, I condemn the actions of any man who engages in sexual misconduct not just against minors but against any woman. I also believe that any person who has been abused should feel the liberty to come forward and seek protection.”’

Top line: “Roy Halladay, a two-time Cy Young Award-winning pitcher who retired from baseball nearly four years ago, died when his plane crashed into the Gulf of Mexico on Tuesday. He was 40. Halladay’s ICON A5, a small, single-engine aircraft, went down around noon Tuesday off the coast of Florida, Pasco County Sheriff Chris Nocco said at a news conference. The sheriff’s office marine unit responded and found Halladay’s body in shallow water near some mangroves. No survivors were found. Police said they couldn’t confirm if there were additional passengers on the plane or where it was headed. Nocco said the National Transportation Safety Board is investigating the crash.”

~SonaliK is reading The Paper Files by MyDomaine