Turkish-backed Syrian opposition fighters on an armoured personnel carrier drive to cross the border into Syria, in Akcakale, Sanliurfa province, southeastern Turkey, Friday, Oct. 18, 2019. Fighting continued in a northeast Syrian border town at the center of the fight between Turkey and Kurdish forces early Friday, despite a U.S.-brokered cease-fire that went into effect overnight. (AP Photo/Emrah Gurel)

After almost two weeks of fighting, Turkey agreed to a U.S.-brokered tentative five-day cease-fire in Syria, allowing Kurdish forces and civilians to evacuate/withdraw while preventing clashes with new Kurdish allies in the Russian and Syrian military and also granting control of seized land to Turkey. However, it is not clear whether Syrian representatives agreed to the terms, as well. U.S. troops, meanwhile, will continue their withdrawal.

In other international news, a new Brexit deal was agreed to by British Prime Minister Boris Johnson and the European Union, but does not have support from Northern Ireland’s leaders. The U.K. Parliament now must vote on whether to approve it.

In U.S. politics, another presidential debate between 12 Democratic candidates was held, the impeachment inquiry continued with more testimony from diplomats and aides, Energy Secretary Rick Perry announced his impending resignation due to his involvement with the Ukraine scandal, Democratic leader Rep. Elijah Cummings died at the age of 68, and President Donald Trump awarded the 2020 G-7 summit contract to his own Miami golf resort.

Top line: “Turkey will set up a dozen observation posts across northeast Syria, President Tayyip Erdogan said on Friday, insisting that a planned “safe zone” will extend much further than U.S. officials said was covered under a fragile ceasefire deal. Less than 24 hours after he agreed the five-day truce to allow Kurdish forces time to pull back from Turkey’s crossborder assault, Erdogan underlined Ankara’s continued ambition to establish a presence along 300 miles of territory inside Syria. On the border itself shelling could be heard near the Syrian town of Ras al Ain on Friday morning despite Thursday’s deal, and a spokesman for the Kurdish-led forces said Turkey was violating the ceasefire, hitting civilian targets in the town.” 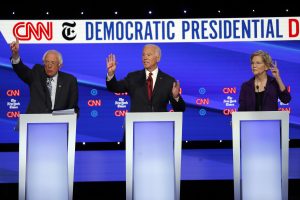 Top line: “Boris Johnson has urged MPs to “come together” to back the Brexit deal he has secured with the EU, insisting there is “no better outcome”. The prime minister told the BBC’s Laura Kuenssberg he wanted the country to “move on” from Brexit, which he described as “divisive”. And he said he was hopeful the deal would pass the Commons on Saturday. The government’s former allies in the DUP and every opposition party plans to vote against it. The new deal, agreed by Mr Johnson and the EU on Thursday, is similar to the one agreed by Theresa May last year – but it removes the controversial backstop clause, which critics say could have kept the UK tied indefinitely to EU customs rules. Northern Ireland would remain in the UK’s customs union under the new agreement, but there would also be customs checks on some goods passing through en route to Ireland and the EU single market. Mr Johnson and his team are trying to persuade enough Labour rebels, former Conservatives and Brexiteer Tory rebels to get it across the line in Parliament.”

Top line: “Two Cabinet secretaries. The acting White House chief of staff. A bevy of career diplomats. President Trump’s personal attorney. And at the center of the impeachment inquiry, the president himself. Over two weeks of closed-door testimony, a clear portrait has emerged of a president personally orchestrating the effort to pressure a foreign government to dig up dirt on a potential 2020 political rival — and marshaling the full resources of the federal bureaucracy to help in that endeavor. On Thursday, acting White House chief of staff Mick Mulvaney waded further into the morass, saying during a rare news conference that he understood Trump to be asking for a quid pro quo with his Ukrainian counterpart — only to attempt to retract those comments in a bellicose statement six hours later.”

In this Aug. 7, 2019, photo, Rep. Elijah Cummings, D-Md., speaks during a luncheon at the National Press Club in Washington. U.S. Rep. Cummings has died from complications of longtime health challenges, his office said in a statement on Oct. 17, 2019. (AP Photo/Patrick Semansky)

Top line: “Rep. Elijah Cummings, a longtime Maryland Democrat and key figure leading investigations into President Donald Trump, has died at age 68, his office announced early Thursday morning. He died of “complications concerning longstanding health challenges,” his office said in a statement. The congressman, who had represented Maryland’s 7th Congressional District since 1996, served as the chairman of the House Oversight and Reform Committee, one of the panels involved in the impeachment inquiry of Trump. He oversaw a range of investigations into the Trump administration, from issues relating to the impeachment inquiry to the treatment of migrants at the southern border to the use of personal email for official use by White House officials to how a citizenship question was considered for the US census. And it was his committee that grilled Trump’s former personal attorney, Michael Cohen, in a blockbuster hearing this past February.”

Top line: “The world’s first all-female spacewalking team made history high above Earth on Friday, replacing a broken part of the International Space Station’s power grid. As NASA astronauts Christina Koch and Jessica Meir successfully completed the job with wrenches, screwdrivers and power-grip tools, it marked the first time in a half-century of spacewalking that men weren’t part of the action. They insisted they were just doing their job after years of training, following in the footsteps of women who paved the way. America’s first female spacewalker from 35 years ago, Kathy Sullivan, was delighted. She said it’s good to finally have enough women in the astronaut corps and trained for spacewalking for this to happen.”

Top line: “President Trump has tapped Deputy Energy Secretary Dan Brouillette to take Rick Perry’s place as energy secretary. Mr. Trump made the announcement in a tweet Friday. CBS News reported Perry’s impending exit Thursday, and the president and Perry subsequently confirmed it. Perry plans to leave before the end of the year, although it’s unclear exactly when. When Mr. Trump announced Perry’s departure, he said he already had a replacement. Before joining the administration, Brouillette was the senior vice president and head of public policy for USAA, and a vice president at Ford Motor Company. As far as his experience in the energy sector goes, Brouillette is a former state energy regulator, and worked as chief of staff to the House Energy and commerce Committee. Perry announced his departure after his name became embroiled in the Ukraine scandal engulfing the Trump administration, although Perry insisted his exit had nothing to do with that and has been months in the making.”

Top line: “The United Auto Workers’ proposed tentative deal with General Motors includes the closure of three U.S. plants, including a large assembly plant in Lordstown, Ohio, according to the union. The company told the union it would bring battery cell production to Mahoning Valley, a region that includes Lordstown in Ohio. The plans, according to GM, would create about 1,000 manufacturing jobs, and include the sale of Lordstown to Lordstown Motors Corp., a new company that plans to build electric pickups for commercial fleet customers. That company plans to initially create 400 jobs, GM said. GM, according to a person familiar with the negotiations, is expected to invest $9 billion in manufacturing operations as part of the deal, including the battery cell production. About $7.7 billion of that would be “direct” investment in current U.S. plants. The agreement would also pay most union members an $11,000 “ratification” bonus once the contract is signed. Temporary workers, who have a shortened path to becoming permanent employees as part of the deal, would receive $4,500 ratification bonuses. Local union leaders and UAW members still must approve the deal, which could end the union’s 32-day strike against the company.”

Top line: “Facebook CEO Mark Zuckerberg on Thursday launched a defense of how tech companies promote and regulate free speech, arguing that Facebook and its peers have emerged as a “fifth estate” of digital speech in society alongside traditional news media. Zuckerberg, in a speech at Georgetown University, repeatedly cast Facebook and free expression as one and the same. He echoed language from the 18th century, when people began referring to journalists and the press as a “fourth estate” co-existing with three existing tiers in the British Parliament. The speech in the nation’s capital was Zuckerberg’s most visible move yet to counter growing pressure from Democratic presidential candidates, Republican lawmakers and other critics calling for Facebook and tech companies to broadly change how they regulate speech on their platforms.”

Top line: “Juul is suspending sales of its sweet flavors, including mango, creme and cucumber, while the Food and Drug Administration reviews the products, the company announced Thursday. The company will continue to sell tobacco, menthol and mint flavors. In a statement, Juul’s new CEO, K.C. Crosthwaite, said that the company’s products are intended for adult consumers. Critics said the company should go further and discontinue its sale of flavored products altogether. The company has come under fire while the FDA and Centers for Disease Control investigate an outbreak of lung injuries and deaths linked to vaping, which has sickened more than 1,479 Americans, according to the latest numbers, which the agency released Thursday. In addition to the lung injuries, 33 people have died, with the victims ranging in age from 13 to 75 years old.”