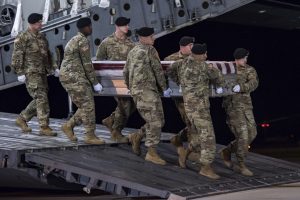 In this image provided by the U.S. Army, a carry team of soldiers from the 3d U.S. Infantry Regiment (The Old Guard), carry the transfer case during a casualty return for Staff Sgt. Dustin M. Wright, of Lyons, Ga., at Dover Air Force Base, Del., Oct. 5, 2017. U.S. and Niger forces were leaving a meeting with tribal leaders when they were ambushed on Oct. 4 and Wright and three other soldiers were killed. There were about a dozen U.S. troops and a company of Niger forces, for a total of about 40 service members in the joint mission. (Pfc. Lane Hiser/U.S. Army via AP)

A deadly ambush in Niger dominated the news this week after claiming the lives of four American service members and four Nigerien soldiers. Details of the episode are scarce and conflicting but reports say that the “Pentagon is trying to determine whether American forces diverted from their routine patrol to embark on an unapproved mission.”

President Donald Trump came under fire after the aunt of an Army sergeant killed in the incident accused Trump of showing “disrespect” to the soldier’s grieving family when he called them to express his condolences. Chief of Staff John Kelly defended the president’s handling of the phone calls to military families and decried comments by Democratic congresswoman Rep. Frederica Wilson, who was among the president’s chief critics.

Trump also spent the week reversing course on the latest health care deal, and clearing a big hurdle in his drive to overhaul tax reform after the Senate approved the budget.

Elsewhere in the world, U.S. backed Syrian Democratic Forces claimed “historic victory” over ISIS and declared “total liberation” of the city of Raqqa. Somalia witnessed the worst attack in its history when a truck bomb exploded in the heart of Mogadishu, killing 358 people and injuring hundreds. In Europe, Spain pushed to remove Catalan leaders and demanded the election of new leaders within the “next six months.”

Top line: “In interviews with both the Defense Department and The New York Times, Nigerien military officials said that a lightly armed convoy of about 50 Nigerien and American soldiers gave chase to Islamic insurgents on motorcycles until the men crossed the border into Mali, then returned later to ambush the troops. American service members, by contrast, insisted that they did not chase the insurgents but simply “noticed” them in the vicinity of the village of Tongo Tongo, Defense Department officials said. It was not until the troops interviewed village leaders and were on their way to their base, by the American account, that the insurgents ambushed the convoy, overwhelming them.” 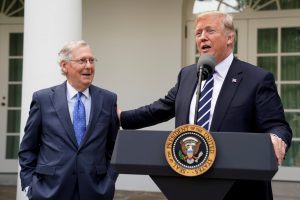 U.S. President Donald Trump speaks to the media with U.S. Senate Majority Leader Mitch McConnell at his side in the Rose Garden of the White House in Washington, U.S., October 16, 2017. REUTERS/Yuri Gripas

Top line: “For over 30 minutes, Trump touched on the rumors of his rocky relationship with fellow Republicans, his action to halt Obamacare subsidy payments, the federal response to Hurricane Maria in Puerto Rico, the nation’s opioid epidemic, his former rival Hillary Clinton, the NFL national anthem protests and the ambush of U.S. soldiers in Niger, among other issues.” 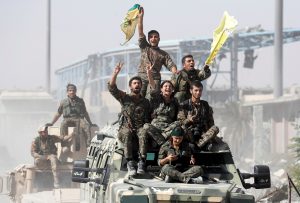 Top line: “Speaking at a ceremony held to celebrate the capture of Raqqa, Syrian Democratic Forces spokesman Talal Silo claimed a “historic victory” over ISIS and said the extremist group had suffered a “brutal” defeat. He paid tribute to all those killed and injured in the struggle, as well as all the Syrian factions that battled for 130 days to force ISIS from its key Syrian stronghold and their international backers. Silo said control of the city would be handed over to civilian leaders once clearing operations were completed and that the SDF would guarantee the protection of the city and its province.”

Top line: “Trump’s drive to overhaul the U.S. tax code cleared a critical hurdle on Thursday when the Senate approved a budget measure that will allow Republicans to pursue a tax-cut package without Democratic party support. But Republicans, who control both the Senate and House of Representatives, have yet to produce a tax reform bill as a self-imposed deadline to overhaul the U.S. tax code by the end of the year approaches. The party’s lawmakers differ widely on what cuts to make and how to pay for them.”

Top line: “White House Chief of Staff John F. Kelly, a retired Marine general who lost his son in combat, gave an emotional defense Thursday of President Trump’s calls to the families of soldiers killed this month in Niger, and assailed a Democratic congresswoman who was among the president’s chief critics. Kelly said he was “stunned” and “brokenhearted” to see a member of Congress, Rep. Frederica Wilson of Florida, on television describing Trump’s conversation with the widow of Army Sgt. La David T. Johnson, one of four U.S. soldiers who died in an Oct. 4 ambush in the West African country.”

Top line: “A day after signaling support for the plan developed by Sens. Lamar Alexander, R-Tenn., and Patty Murray, D-Wash., Trump tweeted Wednesday that the agreement’s two-year extension of subsidies for insurers to cover low-income clients might benefit insurance companies too much. Even as the deal’s supporters continued to pursue co-sponsors, its momentum slowed.”

Top line: “The death toll from last Saturday’s huge truck bombing in the Somali capital Mogadishu has risen to 358, the information minister says. Some 56 people are also still missing, Abdirahman Osman says. Officials have blamed the Islamist al-Shabab group, allied to al-Qaeda. But the group has not said it was behind the attack. The blast left 228 people injured, of whom 122 had been flown to Turkey, Sudan and Kenya for treatment, Mr Osman said.”

Top line: “President Trump on Tuesday said his nominee to be the nation’s drug czar is withdrawing from consideration for the job — a move that comes in the wake of a Washington Post/“60 Minutes” investigation detailing how the lawmaker helped steer legislation through Congress that weakened the Drug Enforcement Administration’s ability to go after drug distributors, even as opioid-related deaths continue to rise. Trump declined to express support for Marino Monday when asked about his nominee during a news conference, saying, “we’re going to be looking into” the Post/”60 Minutes” report. Many Democrats and at least one Republican have called for modification or outright repeal of the law the investigation showed was the result of a targeted lobbying campaign by the drug distribution industry.”

9. Spain government will seek to impose direct rule over Catalonia – The Guardian, Staff and agencies

Top line: “The prime minister, Mariano Rajoy, was meeting his cabinet on Saturday morning to set out the extent of the powers that will be removed from the wealthy north-east region, which enjoys wide autonomy, including control over its own policing, education and healthcare. The measures, which take the country into uncharted legal waters, come after King Felipe VI criticised what he said was an “unacceptable secession attempt”. He said the crisis sparked by the region’s banned 1 October independence referendum must be resolved “through legitimate democratic institutions. We do not want to give up that which we have built together.”’

Top line: “In his ruling, Chuang wrote that President Trump’s own tweets helped convince him that the latest policy is an “inextricable re-animation of the twice-enjoined Muslim ban” that Trump called for on the campaign trail and is therefore likely to be found unconstitutional. Chuang said the plaintiffs “are likely to suffer irreparable harm in the absence of injunctive relief, and that the balance of the equities and the public interest favor an injunction.” The judge’s order was filed one day before Trump’s ban was set to take effect. It follows a similar order Tuesday from a federal judge in Hawaii in a related case.”

~SonaliK is reading Behind the Numbers