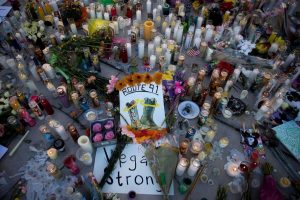 A makeshift memorial for the victims of Sunday night’s mass shooting stands at an intersection of the north end of the Las Vegas Strip. Drew Angerer/Getty Images

A stunned U.S. began the week with the news of the deadliest mass shooting in its history, when a 64-year-old Stephen Paddock opened fire on the unsuspecting crowds gathered at the Route 91 Harvest Country Music Festival in Las Vegas. 58 lives were lost and hundreds were wounded in the span of 10 minutes, before Paddock shot himself in his Mandalay Bay hotel suite.

While a number of details have emerged about Paddock, none point to a motive yet. Families and friends continued to pay tribute to the victims of the massacre throughout the week.

At the end of the week, the Trump administration rolled back access to contraception under the Affordable Care Act and indicated plans to ‘decertify’ the Iran nuclear deal.

In Catalonia, hundreds of people were injured in clashes with the police over the Catalan independence referendum. The vote was declared illegal by Spain’s top court, ballot boxes were seized and people were prevented from entering polling booths.

Winners of the Nobel Prize were also revealed this week in the fields of medicine, physics, chemistry, peace and literature. The Nobel prize for economics will be awarded next week.

Top line: “Police say they have looked into more than 1,000 leads. Authorities have delved into Paddock’s gun purchases, computers and travel plans, spoken to his relatives and traced his actions leading up to the shooting. What they lack, however, are answers explaining why a 64-year-old avid gambler meticulously planned and carried out out the deadliest mass shooting in modern American history.” 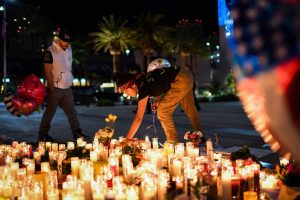 Priscilla Olivas, 19, of Las Vegas, lights a candle at a street vigil that was held for the victims. Salwan Georges/The Washington Post via Getty Images

Top line: “A registered nurse from Tennessee. An off-duty Las Vegas police officer. A 35-year-old Californian middle school teacher. Details of the victims of Sunday night’s mass shooting at the Route 91 Harvest Festival in Las Vegas began to emerge on Tuesday, 24 hours after at least 58 people were killed and hundreds more injured in the most deadly mass shooting in modern United States history.” 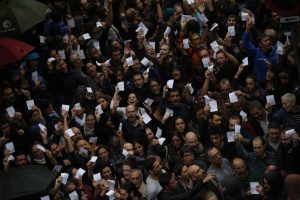 Pro-referendum supporters show their ballot papers as Spanish National Police block them from entering the Ramon Llull school assigned to be a polling station by the Catalan government in Barcelona. AP Photo/Emilio Morenatti

Top line: “Catalan emergency officials say 761 people have been injured as police used force to try to block voting in Catalonia’s independence referendum. The Spanish government had pledged to stop a poll that was declared illegal by the country’s constitutional court. Police officers prevented some people from voting, and seized ballot papers and boxes at polling stations.”

Top line: “The National Rifle Association says it is open to new regulations on bump stocks, devices possessed by the mass shooter in Las Vegas that can be used to fire rifles similarly to automatic weapons. This comes as top Republicans in Congress appear open to the idea of a federal law banning the devices.”

Top line: “Trump will spell out a broader strategy for confronting Iran, including its ballistic missile program and support for terror networks in the Middle East, as he unveils his decision on the Iran deal, according to one senior US official. The official didn’t specify what precise steps he may take. Under the new Iran strategy the current deal will stay in place, with efforts being made within the framework of the existing agreement to try and strengthen inspections and plan for what happens when it expires, a senior US official told CNN on Thursday.”

Top line: “More than 55 million women have access to birth control without co-payments because of the contraceptive coverage mandate, according to a study commissioned by the Obama administration. Under the new regulations, hundreds of thousands of women could lose birth control benefits they now receive at no cost under the Affordable Care Act.”

Top line: “Thrust into the spotlight under uncomfortable circumstances, the normally camera-shy Tillerson sought to rebut a widely disseminated NBC News story that claimed Vice President Mike Pence had to talk the former oil man out of resigning over the summer, and that Tillerson had questioned Trump’s intelligence. The explosive claims followed several instances in which Trump and Tillerson’s policy pronouncements have appeared to clash. “There has never been a consideration in my mind to leave,” Tillerson told reporters in an unusually personal address from the State Department’s staid 7th-floor Treaty Room outside of his office.”

Top line: “Four U.S. soldiers died in the firefight, killed in a country where most Americans were unaware that their army is deployed but where Washington has steadily grown its presence. One soldier’s body was only recovered two days later.” 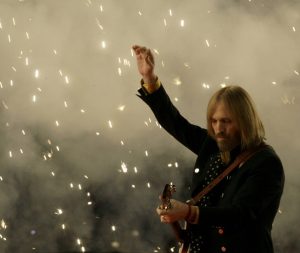 Top line: “Tom Petty, the dynamic and iconoclastic frontman who led the band the Heartbreakers, died Monday. He was 66. Petty’s death was confirmed by Tony Dimitriades, longtime manager of Tom Petty & The Heartbreakers, on behalf of the family.”