The military conflict in Syria continued into a third week before Russia and Turkey agreed to a tentative end to fighting in exchange for granting Turkey control over a strip of Syria’s border with it and granting Russia the right to patrol where U.S. forces used to be. Meanwhile, Syrian Kurds continued to evacuate, U.S. troops and armored vehicles continued to withdraw except in the areas around oil fields, and President Donald Trump removed sanctions from Turkey.

The impeachment inquiry also continued, with testimony from more State Department and Defense Department officials, as well as a protest by dozens of Republicans.

Also in the U.K., 39 people were found dead inside a refrigerated truck that had traveled from China through Europe to Britain, sparking a global investigation into human trafficking and at least four arrests.

In business news, United Auto Workers members voted to ratify a new contract with General Motors and end their 40-day strike, WeWork’s board approved a takeover by Japanese firm SoftBank, and Boeing faced the release of the final Lion Air crash report.

Facebook’s Mark Zuckerberg testified to Congress in defense of their efforts to launch the Libra cryptocurrency. Facebook also faces a 47-state antitrust lawsuit and announced plans to invest in more news-focused content.

The late civil rights leader and Maryland Congressmember Elijah Cummings became the first black American to lay in state at the U.S. Capitol ahead of a celebration of his life attended by past presidents and other dignitaries.

California wildfires sparked a state of emergency declaration, mass evacuations, and intentional blackouts in an attempt to prevent more fire. 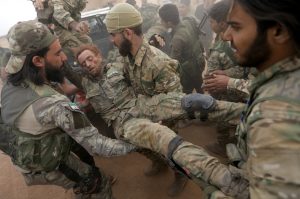 Top line: “Russia sent about 300 more military police and more than 20 armored vehicles to Syria on Friday under an accord between Ankara and Moscow that has halted Turkey’s military incursion into northeast Syria. The deal, sealed on Tuesday by Presidents Tayyip Erdogan and Vladimir Putin, requires that Russian military police and Syrian border guards remove all Kurdish YPG militia from within 30 km (19 miles) of the Turkish border by next Tuesday. Under the terms of the deal, from next Tuesday Russian and Turkish forces will start to patrol a narrower, 10-km strip of land on the Syrian side of the border where U.S. troops had been deployed for years alongside their former Kurdish allies. The arrival of the Russian police marks a shift in the regional balance of power less than three weeks after Trump began pulling U.S. forces out of northeast Syria. It has also highlighted a growing security relationship between Russia, a close ally of Syrian President Bashar al-Assad and now the dominant power inside Syria, and NATO member Turkey.”

Top line: “Roughly two-dozen House Republicans on Wednesday stormed a closed-door deposition in secure House Intelligence Committee spaces to rail against the Democratic-led impeachment inquiry, a political stunt ratcheting up the GOP complaints about the process that delayed Wednesday’s scheduled deposition for five hours. Once Deputy Assistant Defense Secretary Laura Cooper’s testimony began, she provided a very technical readout of how foreign aid is disbursed, according to lawmakers. Several lawmakers say her testimony helped show that the Ukraine aid deviated from that normal process. Cooper, who was issued a subpoena in the same manner as State Department officials who have testified, did not give an opening statement, lawmakers said. The GOP disruption comes one day after the committees heard from the top US diplomat in Ukraine, Bill Taylor, who told lawmakers in a lengthy opening statement that Trump had demanded Ukraine launch an investigation to help him politically before US security aid to Ukraine would be released, undercutting White House claims there was no quid pro quo with Ukraine.”

Top line: “The United Auto Workers gave final approval Friday for a new four-year labor contract with General Motors. The ratification brings to an end the union’s 40-day strike, which cost the automaker well over $2 billion. Some of the union’s 48,000 members with GM are expected to return to work as early as Saturday, showing the automaker is wasting no time in recouping lost production from the work stoppage, which started Sept. 16. The contract was supported by 57% of members who voted, according to final results from the union. Less than 41,000 of the UAW’s roughly 48,000 workers with GM cast ballots. The union on Friday said it will negotiate with Ford next, followed by Fiat Chrysler.” 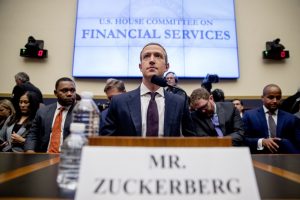 Top line: “Congressional lawmakers delivered a broad lashing of Facebook chief executive Mark Zuckerberg on Wednesday, sniping at his company’s plans to launch a digital currency, its pockmarked track record on privacy and diversity, and its struggles to prevent the spread of misinformation. Facebook’s efforts to launch a cryptocurrency, called Libra, have catalyzed a rare alignment of opposition from the party’s members of Congress and some Trump administration officials, who are concerned Libra could trouble the global financial system. Zuckerberg‘s testimony comes amid a brutal month for Facebook. The company learned this week that it faces an antitrust investigation by Democratic and Republican attorneys general in 47 states, territories and the District of Columbia, far more than the lead state behind the probe, New York, had previously announced. Federal authorities also are scrutinizing Facebook for potential violations of competition law.”

Top line: “A fourth person was arrested in connection with the deaths of 39 people found in the back of a container truck in southeastern England, British police said Friday as the investigation into one of the country’s worst human smuggling cases geared up. Police said a 48-year-old man from Northern Ireland was arrested Friday at England’s Stansted Airport on suspicion of manslaughter and conspiracy to traffic people. The arrest came after police arrested a man and a woman, both 38 and from northwestern England, earlier Friday on the same charges. The 25-year-old driver of the truck remains in custody on suspicion of murder. Essex Police said 31 men and eight women were found dead in the truck early Wednesday at an industrial park in Grays, a town 25 miles (40 kilometers) east of London. Although U.K. police said they believed the dead were Chinese citizens, they acknowledged Friday this was a “developing picture.””

6. SoftBank Takes Control of WeWork as Part of Bailout, Adam Neumann to Leave Board – Bloomberg, Gillian Tan and Michelle Davis

Top line: “SoftBank Group Corp. is taking control of beleaguered WeWork, part of a rescue financing plan that will see former Chief Executive Officer Adam Neumann sever most of his remaining ties with the company he co-founded, according to people familiar with the matter. The eleventh-hour deal throws a lifeline to WeWork parent We Co., which was on the verge of running out of cash after a failed public offering in September. By salvaging one of its biggest investments, SoftBank will give a second chance to WeWork to start over under new ownership. It also tosses a buoy to Neumann, who will give up his board seat and walk away with as much as $1.2 billion as well as a $500 million credit line from SoftBank, after it pushed him out as chief executive officer last month.”

Top line: “California Gov. Gavin Newsom has declared a state of emergency in Sonoma and Los Angeles counties due to two large wildfires. The Kincade fire in the Bay Area has burned nearly 22,000 acres since it started Wednesday night; the Tick fire has burned 4,300 acres northwest of Los Angeles. Both fires were only 5 percent contained as of Friday morning local time, according to the California Department of Forestry and Fire Protection. The Kincade fire isn’t expected to be fully contained until next Thursday. It has already caused the Air Quality Index in San Francisco to shift from “good” to “moderate.” The power utility Pacific Gas & Electric Corp. told regulators that part of a transmission tower broke near the area of the Kincade fire shortly before it began. The company shut down power to distribution lines in the area because of potential fire danger posed by those lines.” 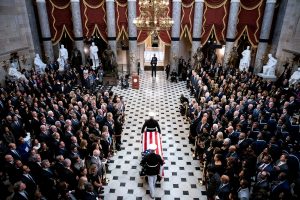 The flag-draped casket of late U.S. Representative Elijah Cummings (D-MD) is carried through National Statuary Hall during a memorial service at the U.S. Capitol in Washington, U.S., October 24, 2019. (Al Drago/Pool via Reuters)

Top line: “Two former United States presidents and a throng of powerful American leaders joined thousands of everyday people in Baltimore on Friday to bid farewell to Representative Elijah E. Cummings, a towering African-American presence in Washington who was praised for his integrity, his character and, in his final months, his unwavering challenges to President Trump. But for all of the emotional remembrances of Mr. Cummings as a champion of working people and civil rights, the funeral, which came amid impending impeachment proceedings against Mr. Trump, also was an implicit rebuke of a president who had called the congressman a “racist” and had criticized his representation of Baltimore, Mr. Cummings’s hometown. Among the Republicans in attendance on Friday were Representatives Jim Jordan of Ohio and Mark Meadows of North Carolina, both staunch Trump loyalists. On Thursday, Mr. Meadows had delivered a moving eulogy to Mr. Cummings as he lay in state in the Capitol, the first black member of Congress ever to be so honored.”

Top line: “The PM has said he will give MPs more time to debate his Brexit deal, if they agree to a 12 December election. Boris Johnson told the BBC he expected the EU to grant an extension to his 31 October deadline, even though he “really” did not want one. But Jeremy Corbyn said he would not support an election until a no-deal Brexit is “off the table”. EU leaders could give their verdict on delaying Brexit for up to three months on Friday. Commons leader Jacob Rees-Mogg told MPs the government would on Monday table a motion calling for a general election. Under the 2011 Fixed-Term Parliament Act, two-thirds of MPs must vote for a general election before one can be held.”

Top line: “Justin Trudeau has won a second term as Canada’s prime minister after the country’s federal election, but his narrow victory means he will lead a minority government that will be forced to depend on other parties to govern. With results still trickling in on Tuesday morning, the Liberals had 156 seats, 14 short of the 170 needed for a majority in the 338-seat House of Commons. Four years after the Liberal leader swept to power promising “sunny ways” after nearly a decade of Conservative rule, Trudeau struggled to inspire voters as he campaigned for re-election.”