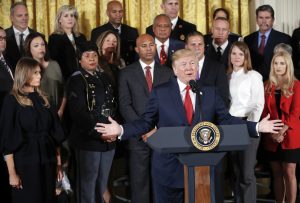 President Donald Trump remained front and center in the news this week as he declared the opioid crisis a “national public health emergency,” authorized the release of 2,800 files on John F. Kennedy’s assassination, sparred with Senator Bob Corker (R-TN) and Senator Jeff Flake (R-AZ) and appeared in a video message at a hurricane relief concert that was also attended by five former U.S. presidents.

The Trump-Russia dossier also made headlines when it was disclosed that Hillary Clinton’s campaign helped finance the dossier. The latest development came Friday when The Washington Free Beacon, a conservative news site, said it hired the firm that produced the dossier.

Around the world, Spain took charge of the Catalan government and China unveiled new leadership.

And the world lost Fats Domino, the New Orleans music legend, who was among the first acts to be inducted into the Rock and Roll Hall of Fame. 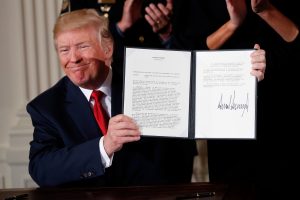 Top line: “President Donald Trump officially declared the opioid epidemic a “national public health emergency” in an announcement at the White House Thursday. “Effective today my administration is officially declaring the opioid crisis a national public health emergency under federal law,” the president said Thursday. “And why I am directing all executive agencies to use every appropriate emergency authority to fight the opioid crisis.” The Public Health Emergency Fund at HHS currently stands at $57,000, according to an agency spokesperson, and officials said the president’s declaration won’t yet include a request for Congress to replenish the fund.” 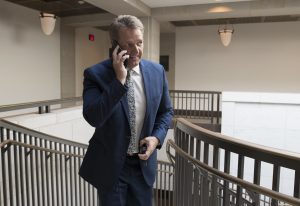 Top line: “Donald Trump came to Capitol Hill on Thursday to build and reinforce bridges with members of Congress less than two weeks before the Republican National Convention. Instead, he burned some to the ground. The sharpest confrontation came with Sen. Jeff Flake of Arizona. “You’ve been very critical of me,” Trump said after Flake introduced himself.” 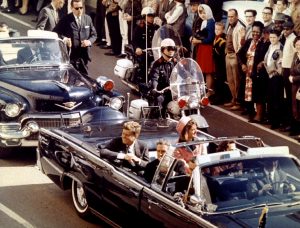 Top line: “The release of thousands of records relating to the assassination of President John F. Kennedy hasn’t settled the best-known, real-life whodunit in American history. But the record offered riveting details of the way intelligence services operated at the time and are striving to keep some particulars a secret even now. The 2,800 records released on Thursday night include some that had dribbled out over the years but are getting renewed attention from being in this big batch.”

Top line: “The Senate-approved resolution passed the House narrowly on Thursday, 216-212, with 20 Republicans voting no and House Speaker Paul Ryan, R-Wis., even having to cast a rare vote to help ensure its passage. The budget does not have the force of law and does not need President Trump’s signature. But it does formally authorize a process that will allow Republicans to write a tax bill that needs only 50 votes to pass the Senate, circumventing the threat of a filibuster from Democrats since Republicans hold 52 seats. Republicans plan to release their tax bill next Wednesday, with a stated goal of passing it by the end of the year.”

Top line: “The Spanish government has stripped Catalonia of its autonomy and taken charge of its government. The measures early on Saturday came after the Catalan parliament voted to declare independence on Friday. An official state bulletin dismissed Catalan leaders and handed control of Catalonia to Spain’s Deputy Prime Minister, Soraya Saenz de Santamaria.”

Top line: “Xi led his team in order of rank on to a stage at Beijing’s Great Hall of the People, overlooking Tiananmen Square, culminating a week-long party conclave at which he laid out his vision for an increasingly prosperous China confident of its place on the world stage. Apart from Xi, Premier Li Keqiang was the only one to retain his spot amid sweeping changes on the Politburo Standing Committee. There has been persistent speculation Xi could seek to stay on in some capacity beyond the end of his customary second five years in power, which began on Wednesday.”

Top line: “The firm, Fusion GPS — which has been entwined in federal and congressional probes into Russian election interference in 2016 — was retained by the Free Beacon during the 2016 elections “to provide research on multiple candidates in the Republican presidential primary,” Free Beacon editor and chief Matthew Continetti and chairman Michael Goldfarb said in the statement.”

8. Outnumbered and outgunned, US troops got separated in Niger ambush – CNN, Arwa Damon and Brent Swails

Top line: “Outnumbered and lightly armed, a Green Beret-led team that was ambushed by militants in Niger earlier this month became separated during the firefight, US officials and a Nigerien soldier told CNN Thursday. The squad was traveling with 30 Nigerien soldiers when they were attacked by approximately 50 ISIS-affiliated fighters armed with rocket propelled grenades, mortars, and heavy machine guns, according to US military officials. During the subsequent gun battle, which lasted for hours, four US soldiers were killed and two were wounded. Five Nigerien soldiers were also killed. US-Nigerien forces managed to kill 20 militants during the fight on October 4.” 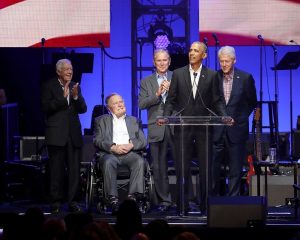 Top line: “The joint appearance by the former presidents — Barack Obama, George W. Bush, Bill Clinton, George Bush and Jimmy Carter — at the “Deep From the Heart” concert was part of a larger disaster relief campaign that began in September. Hurricanes Harvey, Irma and Maria caused extensive property damage and killed more than a hundred people in the United States. About an hour into the concert, President Trump thanked his predecessors for their “tremendous assistance” in a prerecorded video.” 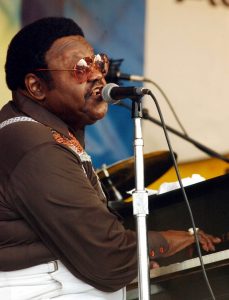 Top line: “Fats Domino, the genial, good-natured symbol of the dawn of rock and roll and the voice and piano behind enduring hits like “Blueberry Hill” and “Ain’t That a Shame,” died Tuesday at the age of 89. A contemporary of Elvis Presley, Chuck Berry and Jerry Lee Lewis, Domino was among the first acts inducted into the Rock and Roll Hall of Fame, and was reportedly only second to Presley in record sales thanks to a titanic string of 11 top 10 hits between 1955 and 1960.”

~SonaliK is reading The Upside Down by Mashable