WASHINGTON, DC – OCTOBER 31: Speaker of the House Nancy Pelosi (D-CA) gavels the close of a vote by the U.S. House of Representatives on a resolution formalizing the impeachment inquiry centered on U.S. President Donald Trump October 31, 2019 in Washington, DC. The resolution, passed by a vote of 232-196, creates the legal framework for public hearings, procedures for the White House to respond to evidence and the process for consideration of future articles of impeachment by the full House of Representatives. (Photo by Win McNamee/Getty Images)

The U.S. House of Representatives voted along party lines to formalize next steps for the impeachment inquiry into President Donald Trump. In the meantime, testimony continued from several top national security figures, who revealed more details about the controversial phone call between Trump and Ukraine’s president that is at the center of the probe.

Elsewhere in the world, mass protests led to the resignation of Lebanon’s prime minister and Iraq’s prime minister. And in Britain, Prime Minister Boris Johnson got enough support in parliament to hold a December 12 general election, but had to extend the Brexit deadline to January 31, 2020.

And in other news, over a dozen wildfires continued to ravage California’s cities and countryside, the Federal Reserve cut interest rates for the third time this year and the Washington Nationals won their first-ever World Series championship.

Top line: “A bitterly divided House of Representatives voted Thursday to endorse the Democratic-led impeachment inquiry into President Trump, in a historic action that set up a critical new public phase of the investigation and underscored the political polarization that serves as its backdrop. The vote was 232 to 196 to approve a resolution that sets out rules for an impeachment process for which there are few precedents, and which promises to consume the country a little more than a year before the 2020 elections. It was only the third time in modern history that the House had taken a vote on an impeachment inquiry into a sitting president.”

Top line: “The senior White House lawyer who placed a record of President Donald Trump’s July 25 call with Ukraine’s president in a top-secret system also instructed at least one official who heard the call not to tell anyone about it, according to testimony heard by House impeachment investigators this week. The White House counsel’s office is now conducting a review of all documents relevant to the Ukraine pressure campaign, according to a person familiar with the matter, in an effort to push back on the Democrats’ central charge—an allegation corroborated by several administration officials—that Trump withheld military assistance aid and a White House summit from the Ukrainians in exchange for Zelensky’s public commitment to investigate Trump’s political rivals.” 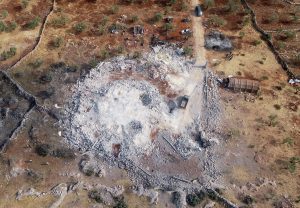 IDLIB, SYRIA – NOVEMBER 28: A drone photo shows an aerial view of operation area where Daesh leader Abu Bakr al-Baghdadi killed in, on October 28, 2019 in northwestern Syria in Idlib, Syria . A U.S. raid that allegedly killed Daesh leader Abu Bakr al-Baghdadi in northwestern Syria lasted for some four hours, according to local sources. The operation, in which helicopters, drones, and ground units were used, took place a few kilometers away from the Tourlaha camp, where displaced civilians have taken shelter in the northern Idlib province, said the sources, who asked not to be named due to security concerns. (Photo by Ahmet Weys/Anadolu Agency via Getty Images)

Top line: “The Islamic State on Thursday confirmed the death of its founder and leader Abu Bakr al-Baghdadi and announced a successor. The propaganda arm of ISIS also confirmed the death of another top ISIS official, its former spokesman. In an audio message released through its central media operation, the group’s new spokesman announced that Baghdadi’s successor is a man named Abu Ibrahim al-Hashimi al-Quraishi. He is a figure largely unknown outside of ISIS circles and is hailed in the message as “emir of the believers” and “caliph” of the group’s alleged caliphate. In the announcement, both Baghdadi and former ISIS spokesman Abu al-Hassan al-Muhajir were praised as “martyrs.” The ISIS announcement came four days after President Trump told a nationally televised news conference that U.S. forces brought “the world’s No. 1 terrorist leader to justice.””

Top line: “Former Rep. Beto O’Rourke dropped out of the 2020 presidential race on Friday after a disappointing campaign that failed to build off the momentum generated from his longshot Texas Senate run. “Though today we are suspending this campaign, let us each continue our commitment to the country in whatever capacity we can,” he wrote in an email to supporters. Lagging in the polls and with fundraising, O’Rourke had yet to qualify for the Nov. 20 debate sponsored by MSNBC and The Washington Post.”

In this photo illustration a Twitter logo displayed on a smartphone. (Photo by Omar Marques/SOPA Images/LightRocket via Getty Images)

Top line: “Twitter, reacting to growing concern about misinformation spread on social media, is banning all political advertising from its service. Its move strikes a sharp contrast with Facebook, which continues to defend running paid political ads, even false ones, as a free speech priority. Facebook has taken fire since it reiterated in September that it will not fact-check ads by politicians or their campaigns, which could allow them to lie freely. CEO Mark Zuckerberg told Congress in October that politicians have the right to free speech on Facebook. Zuckerberg wasted no time responding to Twitter’s move. During Facebook’s conference call for earnings, which began less than an hour after Dorsey’s tweet, the Facebook chief offered an impassioned monologue about what he called his company’s deep belief “that political speech is important.””

Top line: “Democratic presidential hopeful Senator Elizabeth Warren rolled out a wide-ranging menu Friday to fund her multitrillion-dollar Medicare for All plan, a defining moment that fleshes out her vision to remake one-fifth of the U.S. economy. The plan would redirect most employer-based health care spending to the government so it can put all Americans into Medicare, while slapping a wave of taxes on large corporations and the wealthy, cracking down on tax evasion, reducing defense spending and putting newly legalized immigrants on the tax rolls. Her advisers also lowered the estimate of Medicare for All’s price-tag to $20.5 trillion over 10 years from the $34 trillion the Urban Institute predicted, by using the new Medicare-for-All negotiating power to slash administrative spending, drug prices and provider payments.”

Top line: “The economy added 128,000 jobs in October, despite the negative impact of a General Motors strike, which reduced vehicle and parts manufacturing jobs by 42,000. Economists had expected a total of just 75,000 payrolls, according to Dow Jones. Payrolls for August and September were revised higher by 95,000 jobs, bringing the average for the year to 167,000 per month, below last year’s average gain of 223,000. The Fed on Wednesday lowered interest rates by a quarter point and signaled it would take a pause from further moves, unless it sees a notable change in its outlook. At the time, Fed Chairman Jerome Powell said the central bank anticipates a moderately growing economy and a solid labor market.” 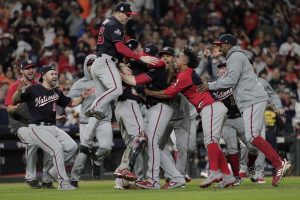 The Washington Nationals celebrate after winning Game 7 of the World Series against the Houston Astros, 6-2, to capture D.C.’s first title since 1924. (AP Photo/David J. Phillip)

Top line: “Suddenly, it was all over, and the blue-jerseyed visitors were spilling and screaming out of every corner of Minute Maid Park — from their dugout along the third base line, the bullpen in left field, the expanse of outfield, all four corners of the diamond — and converging upon the joyous pile of humanity forming near the center. Once the Washington Nationals had no more giant mountains to climb, they took the small dirt hill of the pitcher’s mound, and they hugged and bounced. With one more comeback win, at the end of a comeback season for the ages, the Nationals were World Series champions. A 6-2 victory over the Houston Astros in Game 7 on Wednesday night sealed it, delivering the first baseball title for the nation’s capital since Walter Johnson’s Senators won their only one in 1924.”

Top line: “A wildfire erupted overnight in the hills above communities in Southern California’s Ventura County, forcing evacuations for thousands of people early Friday — even as weather conditions may be improving for firefighters that are battling blazes across the state. The Maria Fire broke out Thursday night on a mountain between the communities of Santa Paula and Somis, and raced downhill, spreading to about 8,730 acres in less than 12 hours and destroying at least two homes, officials said. No injuries were immediately reported. It is one of at least 13 active wildfires in California, many of them stoked by furious winds in recent days. Of the active fires burning in California, more than half broke out this week. The fires stretch across the state from Mendocino County in the north to San Diego County in the south.”

Top line: “The UK is set to go to the polls on 12 December after MPs backed Boris Johnson’s call for an election following months of Brexit deadlock. By a margin of 438 votes to 20, the House of Commons approved legislation paving the way for the first December election since 1923. The bill is still to be approved by the Lords but could become law by the end of the week. If that happens, there will be a five-week campaign up to polling day. The prime minister has said the public must be “given a choice” over the future of Brexit and the country. Mr Johnson hopes the election will give him a fresh mandate for his Brexit deal and break the current Parliamentary deadlock, which has led to the UK’s exit being further delayed to 31 January.”