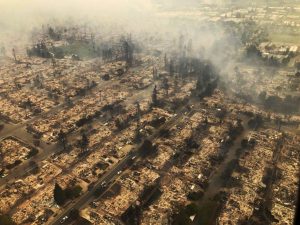 Some of the hundreds of homes destroyed in a wind-driven wildfire that swept through Santa Rosa, Calif., early Monday. California Highway Patrol via AP

Large expanses of Santa Rosa, Sonoma and Napa were left completely devastated this week by wildfires that raged across Northern California’s wine country, claiming the lives of 36 people and razing thousands of structures to the ground.

The firefighters continued to battle blazes around the state in the deadliest outbreak of wildfires in California’s history, which has reportedly burned more than 221,000 acres of land and displaced about 90,000 people from their homes. Per reports, the wildfires emitted a year’s worth of car pollution in less than a week, prompting health advisories, canceled outdoor events, and closed schools for days.

The White House remained at the center of the news as President Donald Trump accused Iran of non-compliance over the nuclear deal and threatened to leave the agreement altogether if it was not amended. The administration also scrapped health care subsidies and announced Kirstjen Nielsen as its nominee for secretary of Homeland Security.

And in a historic move, the Boy Scouts of America will welcome girls into some of their programs. 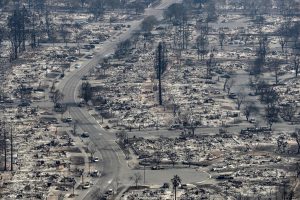 Homes that were destroyed by the Tubbs Fire in Santa Rosa, Calif. Justin Sullivan/Getty Images

Top line: “Thirty-six people have been killed since the wildfires began Sunday night, making this outbreak one of the deadliest in state history, according to the California Department of Forestry and Fire Protection (Cal Fire). Since Sunday, the deadly fires have consumed thousands of homes and forced evacuations in Northern California’s wine country and produced unhealthy air quality in the San Francisco Bay Area. Though progress has been made on the big fires, much more work is ahead.”

Top line: “President Trump on Friday officially disavowed the international nuclear deal with Iran, undermining but not terminating an agreement he called weak and poorly constructed. The administration asked Congress to attach new caveats that could either alter the pact or lead to its rupture. Sounding frustrated and angry, Trump also threatened to unilaterally withdraw from the seven-nation accord if his concerns are not met.”

Top line: “Like variations of a scene shot over and over again, there have been common hallmarks in the disturbing allegations leveled against Weinstein in the past week by some 30 women: A bathrobe. A request for a massage. A suggestion that it’s simply the way things work in the movie business. Another tragic repetition has been in the women who say Weinstein preyed upon them. Overwhelmingly, they constitute young actresses making their first steps into the movies — vulnerable Hollywood hopefuls looking for a part, a movie, their big break.”

Top line: “Citing what it described as “anti-Israel bias” and a need for “fundamental reform,” the United States announced Thursday that it would withdraw from the United Nations agency that works to protect cultural and natural heritage sites across the globe. Israel has apparently followed suit, with media reporting that Prime Minister Benjamin Netanyahu had instructed the Foreign Ministry to begin the process of pulling out of the U.N. Educational, Scientific and Cultural Organization, better known as UNESCO.”

Top line: “Caitlan Coleman, who is originally from Pennsylvania, and Canadian Joshua Boyle were kidnapped by militants while hiking in Afghanistan in late 2012. Coleman was pregnant when she was captured, and the couple had three children while being held hostage. The family were held by the Haqqani network, an insurgent group that supports the Taliban, when the Pakistani military mounted what it called “an intelligence-based operation.”’

Top line: ‘”At this crucial time, we need the Senate to confirm a secretary of Homeland Security, one who is ready to lead on Day One,” Trump said. “Kirstjen has my full faith and confidence, and she also has the complete confidence of the law enforcement officers, dedicated professionals and senior leadership at the Department of Homeland Security.”’

Top line: ‘”The historic decision comes after years of receiving requests from families and girls, the organization evaluated the results of numerous research efforts, gaining input from current members and leaders, as well as parents and girls who’ve never been involved in Scouting — to understand how to offer families an important additional choice in meeting the character development needs of all their children,” the press release reads.” 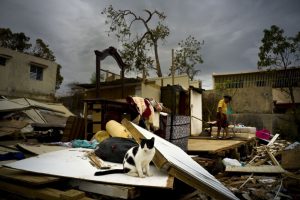 Efrain Diaz Figueroa, right, at the remains of his sister’s house that destroyed by Hurricane Maria in San Juan. AP Photo/Ramon Espinosa

Top line: ‘”We cannot keep FEMA, the Military & the First Responders” in Puerto Rico “forever,” President Trump said Thursday, hinting at a possible limit on federal aid to the island territory where 3.4 million Americans have struggled to recover from two destructive hurricanes. Trump’s comments are his latest remarks on Puerto Rico to offer a mix of criticism and support — and to draw what seems to be a direct response from local politicians in the U.S. territory.”

10. Social Security benefits to get another small boost in 2018 – USA Today, Nathan Bomey

Top line: “Social Security recipients will get a 2% increase in benefits in 2018, an amount slightly lower than what was projected this summer but up sharply from the past two years. The boost is the highest since a 3.6% bump in 2012. The average person will get about $25 more a month. The average monthly Social Security payment is $1,258, or about $15,000 a year.”

~SonaliK is reading The Career Guide by MyDomaine