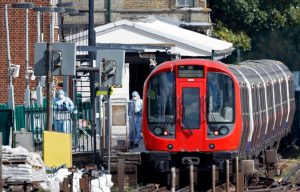 London was shaken by a terror attack Friday, when a bomb exploded on the London Underground, wounding at least 29 people. It was the fifth terrorist attack to take place in Britain this year. Police arrested a man in connection to the incident and raided a home in Sunbury-on-Thames. The investigation is ongoing and more details will likely follow in the days to come.

The end of the week was marked by another major event when North Korea fired a ballistic missile that passed over Japan. Escalating already heightened tensions, the move earned Pyongyang widespread condemnation from the UN, Japan, South Korea, the U.S. and other world leaders.

Earlier in the week, eight elderly patients lost their lives due to excessive heat at the Rehabilitation Center at Hollywood Hills in Florida, after Hurricane Irma caused power outages in the state.

Top line: “Following a fast-moving investigation and manhunt, British police on Saturday morning arrested an 18-year-old man in connection with the attack on the London subway that injured at least 29 people in what police called a terrorist incident.” 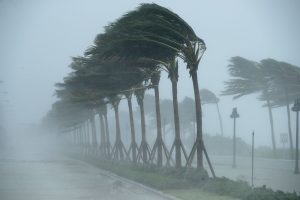 FORT LAUDERDALE, FL – SEPTEMBER 10: Trees bend in the tropical storm wind along North Fort Lauderdale Beach Boulevard as Hurricane Irma hits the southern part of the state September 10, 2017 in Fort Lauderdale, Florida. The powerful hurricane made landfall in the United States in the Florida Keys at 9:10 a.m. after raking across the north coast of Cuba. (Photo by Chip Somodevilla/Getty Images)

Top line: “When asked why the patients hadn’t been taken across the street to Memorial Regional hospital when temperatures became dangerous, Hollywood city spokeswoman Rayelin Storey said, ‘We can’t get inside the heads of the staff and the administrators of this facility.'”

Top line: “North Korea has launched another missile over Japan, a day after it threatened to ‘sink’ the country and turn the US ‘into ashes and darkness.’ Friday’s launch was the longest-ever such flight carried out by the rogue regime, and travelled 3,700km – 800km further than the previous launch over Japan, in August.”

Top line: “President Donald Trump said on Thursday he was close to a deal with Democratic congressional leaders on protections for illegal immigrants brought to the United States as children, astounding fellow Republicans again while alarming conservative supporters.”

5. iPhone X event: the five most important things from the Apple keynote – The Verge, Chaim Gartenberg

Top line: “Specifically, there were three new phones announced today at Apple’s fall event: the high-end iPhone X, which was the star of the show with a new bezel-less design, OLED screen, and 3D face-scanning tech. There’s also the iPhone 8 and 8 Plus, the Apple Watch Series 3 (i.e., the Apple Watch Series 2 with LTE), and the Apple TV 4K (a, um, Apple TV with 4K). Oh, and everything is more powerful and faster, too.”

Top line: “‘It was a perfect spacecraft,’ said Julie Webster, spacecraft operations chief. ‘Right to the end, it did everything we asked it to. It’s perfect, it’s perfect.’ No spacecraft has ever been so close to Saturn. The last few seconds of the Cassini mission provided the ‘first taste’ of the atmosphere of Saturn, NASA said. ‘You can think of Cassini as the first Saturn probe,’ said Linda Spilker, Cassini project scientist.”

Top line: “Shkreli, 34, was hauled off to the Brooklyn Metropolitan Correctional Center on Wednesday night after a judge revoked his bail over a Facebook posting that offered $5,000 to any follower who would grab a hair off Hillary Clinton’s head during her book tour.”

Top line: “The Trump administration on Thursday extended sanctions relief to Iran, avoiding imminent action that could implode the landmark 2015 nuclear deal, even as President Trump and Secretary of State Rex Tillerson accused Tehran of not respecting the entire agreement.”

Top line: “‘This action is based on the information security risks presented by the use of Kaspersky products,’ DHS said Wednesday in a statement. ‘The risk that the Russian government, whether acting on its own or in collaboration with Kaspersky, could capitalize on access provided by Kaspersky products to compromise federal information and information systems directly implicates U.S. national security.'”

10. ‘What Happened’? They Lost. With Her Memoir, Hillary Clinton Joins a Haunted Club – The New York Times, Jon Meacham

Top line: “And so Clinton’s starkly titled ‘What Happened’ now joins what we might call the Kempton Collection, after the New York columnist Murray Kempton, who always believed that the real story was to be found not amid the sprays of Champagne among winners but in the tragic bleakness of the losers’ locker rooms.”

~SonaliK is reading The Emmy Awards 2017