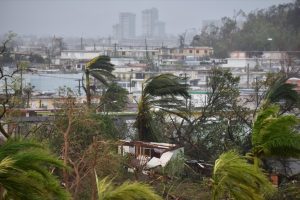 Disaster struck Puerto Rico this week when Hurricane Maria crashed into the southeastern coast of the island, killing over a dozen and rendering an estimated 3.4 million people without power.

The strongest storm to hit the island in 80 years, Maria also knocked out much of the water supply. The situation became even more precarious when Guajataca Dam began showing signs of failing, putting the lives of 70,000 people in the path of danger. Evacuation orders were issued even as the communications infrastructure suffered a total collapse. Recovery efforts are underway across the island and will continue for months to come.

At least 273 people died and many more were trapped after a 7.1 magnitude earthquake hit Mexico Tuesday. The quake came just days after a massive 8.1 magnitude tremor hit the country. Volunteer rescue efforts are being led by an elite rescue group known as the ‘moles’ but searches could last weeks.

At the start of the week, President Trump made his debut on the world stage by delivering his first speech at the United Nations. While North Korea and Iran remained at the center of Trump’s speech, he also talked at length about Venezuela and Cuba, lashing out at one country after another.

Top line: “The urgent situation Friday came more than 48 hours after Hurricane Maria slammed into Puerto Rico’s southeastern coast as the most powerful storm to strike the island in more than 80 years. It was a reminder that Maria’s impact on Puerto Rico is far from over; officials still have little sense of the scope of the damage the island sustained as a communications and power blackout continued to affect nearly everyone in the U.S. territory.” 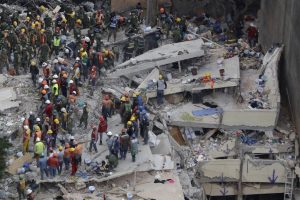 Rescue workers search for people trapped inside a collapsed building in the Del Valle area of Mexico City after a 7.1 earthquake killed more than 200 people. AP Photo/Rebecca Blackwell

Top line: “The death toll from Mexico’s powerful earthquake has risen to 273, officials say, as rescuers race against the clock to reach trapped survivors. Mexico is no stranger to earthquakes and earlier this month an 8.1 magnitude tremor in the south left at least 90 people dead. Tuesday’s tremor struck shortly after many people had taken part in an earthquake drill on the 32nd anniversary of the deadly 1985 quake.”

Top line: “Donald Trump has threatened to “totally destroy” North Korea, in a bellicose first address to the United Nations general assembly in which he lashed out at a litany of US adversaries and called on “righteous” countries to confront them. In an address heavy with echoes of George W Bush’s “Axis of Evil” State of the Union address more than 15 years earlier, Trump said: “The scourge of our planet today are a small group of rogue regimes. “If the righteous many do not confront the wicked few, then evil will triumph,” the president said.”’

Top line: “Mr. Trump derided Mr. Kim as a “madman” on Friday, hours after the North Korean called him a “mentally deranged U.S. dotard,” the sort of name-calling exchange most presidents have avoided. North Korea’s accompanying warning that it might test a nuclear bomb over the Pacific Ocean added fresh urgency to an administration debate over options for a pre-emptive strike if preparations for a launch are detected.”

Top line: “Special counsel Robert Mueller has requested documents and information covering a range of events from President Donald Trump’s White House, including two firings and an Oval Office meeting, sources familiar with the matter tell CNN. The requests show that parts of Mueller’s investigation are focusing on the President’s own actions.”

Top line: “Sen. John McCain (R-Ariz.) announced Friday that he would oppose the latest Obamacare repeal measure, dealing a major blow to the legislation’s prospects of getting 50 votes on the Senate floor next week. “I cannot in good conscience vote for the Graham-Cassidy proposal. I believe we could do better working together, Republicans and Democrats, and have not yet really tried,” McCain said in a statement.”

7. SEC Discloses Hackers Made Off With Data From Its Filing System – NBC News, Alex Johnson

Top line: “The SEC, the agency responsible for regulating the financial securities industry, gave few details about the hack, saying only that it involved a software “vulnerability” in its EDGAR online filing system, resulting in “access to nonpublic information.” The statement said that it didn’t believe any personally identifiable information or SEC operations were compromised and that an investigation was continuing.”

Top line: “In a move that that could nudge consumer borrowing costs higher, the Fed agreed Wednesday to begin gradually shedding much of the roughly $3.5 trillion in bonds it snapped up during and after the downturn to lower long-term interest rates. “We’re working down our balance sheet because we think in some sense it’s no longer needed,” Fed Chair Janet Yellen said at a news conference. “We feel the U.S. economy is performing well.”’

9. Facebook To Give Details Of Thousands Of Russian Election Ads To Congress – Forbes, Kathleen Chaykowski

Top line: “In the video, Zuckerberg said the company would hand over to the Senate and House intelligence committees, who are investigating Russian interference in the 2016 U.S. presidential election, details of more than 3,000 election ads linked to Russia. The ads came from 470 Russian-linked accounts and pages, which Facebook said earlier this month, appeared designed to influence public opinion. Facebook said it would be up to Congress to decide what information about the ads it would ultimately shared with the public.”

10. Minorities and Women Win Big, Breaking Down Barriers at the Emmys – People, BY Thatiana Diaz

Top line: “The 69th Emmy Awards made history this past Sunday evening by shattering glass ceilings and breaking down long-enduring barriers.”

~SonaliK is checking out The Fall Issue by Who What Wear