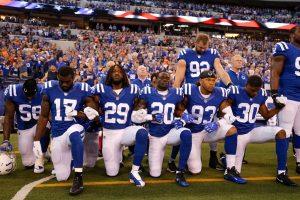 Members of the Indianapolis Colts stand and kneel for the national anthem prior to the start of the game against the Cleveland Browns at Lucas Oil Stadium in Indianapolis. Michael Reaves/Getty Images

The week began with the NFL protesting President Donald Trump‘s comments about sitting during the national anthem. Many players and owners locked arms and took a knee in a show of solidarity.

Tom Price resigned as HHS secretary Friday, amid growing criticism over his overseas trips at taxpayer expense. The White House appointed Deputy Assistant Health Secretary Don Wright as acting head of the agency and is seeking a new health chief.

On the international front, Saudi Arabia allowed women to drive for the first time in its nation’s history and ISIS released an audio message from Abu Bakr al-Baghdadi. The U.S. also announced it’s withdrawing staff from the embassy in Cuba over mysterious attacks.

Top line: “Donald Trump attacked NFL players who have protested during the national anthem on Friday night. On Sunday, Trump took to Twitter, telling his followers to boycott the NFL. The comments only emboldened the movement and encouraged more players to participate.The NFL and NFLPA responded Saturday, but the strongest sentiments came from current and former players who went to Twitter en masse to speak against the comments made by Trump.”

Top line: “HHS Secretary Tom Price resigned Friday in the face of multiple federal inquiries and growing criticism of his use of private and government planes for travel, at a cost to taxpayers of more than $1 million since May. The White House said the former seven-term Georgia congressman, 63, offered his resignation earlier in the day and that President Donald Trump had accepted it. Price becomes the first Trump administration Cabinet secretary to step down.”

Top line: “Three Republicans came out against the bill — Susan Collins of Maine, John McCain of Arizona and Rand Paul of Kentucky. Republicans could lose only two senators for the bill to pass through the budget process of reconciliation, which allows for a majority vote instead of the 60-vote threshold ordinarily needed to end a filibuster.” 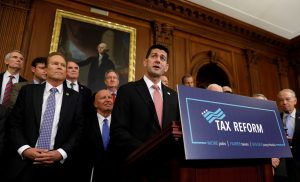 Surrounded by fellow Republicans, Speaker of the House Paul Ryan speaks about the Republican tax plan in the U.S. Capitol in Washington, U.S., September 27, 2017. REUTERS/Kevin Lamarque

Top line: “The Trump administration said on Thursday that it would temporarily waive a century-old shipping law for Puerto Rico that officials there said was hindering disaster relief efforts after Hurricane Maria. The waiver of the law, known as the Jones Act, comes as federal and local officials report more supplies trickling onto the increasingly desperate island. But the Trump administration remains under pressure to step up the recovery effort.” 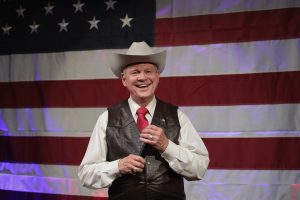 FAIRHOPE, AL – SEPTEMBER 25: Republican candidate for the U.S. Senate in Alabama, Roy Moore, speaks at a campaign rally on September 25, 2017 in Fairhope, Alabama. Moore is running in a primary runoff election against incumbent Luther Strange for the seat vacated when Jeff Sessions was appointed U.S. Attorney General by President Donald Trump. The runoff election is scheduled for September 26. (Photo by Scott Olson/Getty Images)

Top line: “Moore’s victory over Strange was a landslide — 54.6 percent (262,204 votes) to 45.4 percent (218,066 votes), with 100 percent of the vote counted — despite Trump and Senate Majority Leader Mitch McConnell having taken extraordinary measures and spending millions of dollars trying to knock back the twice-removed former chief justice of the Alabama Supreme Court.” 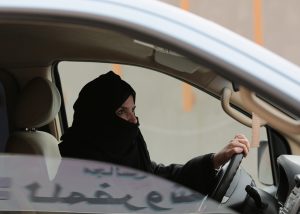 Aziza Yousef drives a car on a highway in Riyadh, Saudi Arabia, Saturday, March 29, 2014, as part of a campaign to defy Saudi Arabia’s ban on women driving. In the six months since Saudi activists renewed calls to defy the kingdom’s ban on female drivers, small numbers of women have gotten behind the wheel almost daily in what has become the country’s longest such campaign. (AP Photo/Hasan Jamali)

Top line: “While there is no formal law banning women from driving, the government refuses to issue them permits. That will now change under the royal decree, which ordered the formation of a ministerial body to give advice within 30 days and then implement the order by June 2018.”

8. US pulls staff from Cuba over ‘specific attacks’ – BBC News

Top line: “The US is withdrawing more than half of its staff at its embassy in Cuba in response to mysterious attacks which left its diplomats unwell. Describing the US decision as “hasty”, Cuba said it would affect bilateral ties but co-operation would continue.US Secretary of State Rex Tillerson said the two countries would continue to co-operate in investigating the attacks and said diplomatic ties would be maintained.”

Top line: “The leader of the Islamic State group urged followers to burn their enemies everywhere and target “media centers of the infidels,” according to an audio recording released Thursday that the extremists said was by Abu Bakr al-Baghdadi. The reclusive leader of IS, who has only appeared in public once, also vowed to continue fighting and lavished praise on his jihadis for their valor in the battlefield — despite the militants’ loss of the northern Iraqi city of Mosul in July.” 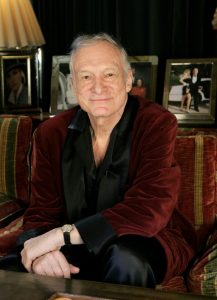 Top line: “Hugh Hefner, the founder and original editor of Playboy, which plopped the post-war sexual revolution onto countless coffee tables around the world, died of natural causes Wednesday. He was 91.”