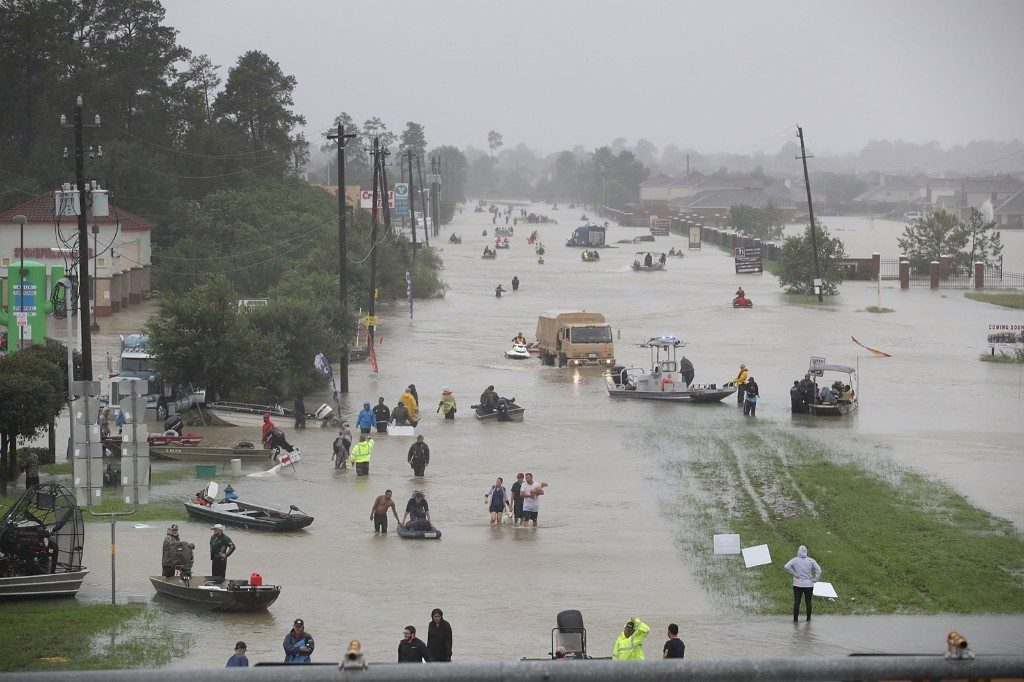 People walk down a flooded street as they evacuate their homes in Houston. Joe Raedle/Getty Images

This week was dominated by the repeated landfall of Hurricane Harvey, the impact of which is still being felt across Texas. The death toll is rising and recovery efforts are only just beginning and expected to exceed what was needed for Hurricane Sandy in 2012.

President Donald Trump visited the Lone Star State twice in the wake of the natural disaster. He also spent the week advocating for tax reform and responding to overtures by North Korea and seeming advancements in their nuclear program.

Top line: “The evacuations represent a tiny snapshot of the massive challenges presented by Harvey, a storm that left at least 50 dead, displaced tens of thousands of people and spurred disaster declarations in dozens of counties.

In Beaumont, a city of 118,000 east of Houston, officials said Saturday they were on the cusp of ending a three-day tap water outage that forced a hospital to evacuate its patients.”

Top line: “The White House is asking Congress for more than $14 billion as a down payment on Hurricane Harvey recovery efforts, sending Republican leaders a request late Friday for $7.8 billion in immediate aid that will be quickly followed by a request for another $6.7 billion, officials said.

The initial funding represents only a fraction of the long-term storm relief for flood-ravaged parts of Texas and Louisiana, which is likely to far exceed the $50 billion in funds allocated to northeastern states in the wake of Hurricane Sandy in 2012.”

Top line: “Two explosions shook a flooded chemical plant near Houston early Thursday, sending a plume of black smoke into the air and triggering an intense fire that continued to burn.”

Top line: “President Trump on Wednesday called on Congress to pass sweeping tax cuts he said would unleash the economy and lead to higher wages for all Americans, leaning hard into conservative economic theories as he tries to revive his domestic agenda.”

Top line: “The diplomatic machinations came the day after the Trump administration ordered three Russian facilities to close: the San Francisco consulate and trade missions in New York and Washington. The Russian Embassy in Washington is not affected, nor are three other Russian consulates in the U.S., including in New York.”

Top line: “The Trump administration Monday lifted a controversial ban on the transfer of some surplus military equipment to police departments whose battlefield-style response to rioting in a St. Louis suburb three years ago prompted a halt to the program.”

Top line: “Fourteen members of a disbanded Penn State fraternity must stand trial in the hazing death of a pledge, but a judge on Friday tossed out the most serious charges, including involuntary manslaughter and aggravated assault.

Top line: “A federal judge in Texas blocked the bulk of the state’s immigration law targeting sanctuary cities on Wednesday, a victory for civil rights groups and Democratic-led city governments that oppose the measure.”

10. Uber’s new CEO: ‘This company has to change’—CNNMoney, Seth Fiegerman

Top line: “After a year full of PR crises and self-inflicted wounds, Uber is finally on the cusp of turning the page.

The Expedia (EXPE) CEO said he will start at Uber on Tuesday.

For Uber, Khosrowshahi’s start can’t come soon enough. It took Uber’s board nearly 70 days to settle on a new CEO after the resignation of its co-founder and previous CEO Travis Kalanick.”