Elsewhere in U.S. politics, Democratic presidential candidate Bernie Sanders underwent heart surgery after experiencing a heart attack while in Las Vegas, Nevada, and the Department of Homeland Security announced plans to start collecting DNA from all migrants at the U.S.-Mexico border and inputting them into the FBI’s criminal database.

On the international stage, the U.S. announced $7.5 billion in tariffs against a mix of products from various countries in the European Union, including French wine, Italian cheese and British cashmere sweaters.

In the courts, a federal judge ruled that states could form their own rules on net neutrality and another judge ruled in favor of Harvard University’s race-conscious admissions policy. And in Texas, ex-Dallas police officer Amber Guyger was sentenced to 10 years in prison for fatally shooting her neighbor, Botham Jean, in his own apartment.

In the business world, Microsoft launched a new line of Surface products, UPS got the green light for the country’s first drone airline, and MGM Resorts agreed to a settlement of between $735 to $800 million with the victims and families of the 2017 shooting in Las Vegas.

Top line: “U.S. House Democrats on Friday subpoenaed the White House for documents they want to see as part of their impeachment investigation of President Donald Trump. The chairmen of three House of Representatives committees said they want documents related to a July 25 phone call between Trump and Ukrainian President Volodymyr Zelenskiy that is at the heart of their inquiry. The three said they were forced to issue the subpoena after the White House failed to produce documents they requested in a Sept. 9 letter. Earlier, the committees asked Vice President Mike Pence to hand over documents relating to a meeting he held with Zelenskiy and the call between Zelenskiy and Trump.” 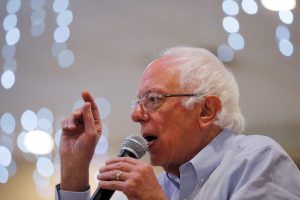 Top line: “Bernie Sanders will participate in the next Democratic primary debate later this month, an aide confirmed Thursday, while the Vermont senator’s wife reported that he is “up and about” following a heart procedure that forced him off the campaign trail. The news of Sanders’ expected participation in the Oct. 15 debate comes after his campaign announced that he had two stents inserted to address a blockage in an artery. Senior adviser Jeff Weaver said in a statement Wednesday that Sanders “will be resting up over the next few days,” and that campaign staff “are canceling his events and appearances until further notice.””

Top line: “European leaders and merchants on Thursday slammed Trump administration plans to impose hefty tariffs on a wide array of European goods after the World Trade Organization ruled in favor of the United States in a long-brewing dispute over subsidies for European aircraft manufacturer Airbus. Pending final approval from the WTO later this month, the Trump administration intends to impose tariffs on about $7.5 billion in European goods, including certain Italian cheeses, British-made cashmere sweaters and, one of President Trump’s favorite targets, French wines. The tariffs — as high as 25 percent on agricultural and industrial products — could take effect as soon as Oct. 18, exacerbating concerns over a possible transatlantic trade war. Ulrich Adam, director general of Europe’s largest spirits lobby, decried the White House’s decision as a misguided step that targets industries unrelated to the core of the growing U.S.-E.U. trade dispute, which centers on aircraft manufacturers.”

Top line: “The European parliament has told Boris Johnson that his proposals for the Irish border do not “even remotely” amount to an acceptable deal for the EU, in comments echoed by Ireland’s prime minister. The committee of MEPs representing the parliament’s views on Brexit said the prime minister’s proposals could not form the basis for an agreement, describing them as a “last-minute” effort. The European parliament will have a veto on any withdrawal agreement. Ireland’s prime minister, Leo Varadkar, also accused Johnson of contradicting his own proposals during an appearance by the British prime minister in the Commons, in which he sought to convince MPs there would be no return of a hard Irish border.”

Top line: “The Trump administration is moving to collect DNA samples from hundreds of thousands of people booked into federal immigration custody each year and to enter the results into a national criminal database, an immense expansion of the use of technology to enforce the nation’s immigration laws. Senior officials at the Department of Homeland Security said Wednesday that the Justice Department was developing a federal regulation that would give immigration officers the authority to collect DNA in detention facilities across the country that are currently holding more than 40,000 people. The move would funnel thousands of new records to the F.B.I., whose extensive DNA database has been limited mainly to genetic markers collected from people who have been arrested, charged or convicted in connection with serious crimes.”

Top line: “A federal appeals court on Tuesday issued a mixed ruling on the Federal Communications Commission repeal of Obama-era net neutrality rules. The court upheld the FCC’s repeal of the rules, but struck down a key provision that blocked states from passing their own net neutrality protections. The DC Circuit Court of Appeals also remanded another piece of the order back to the FCC and told the agency to take into consideration other issues, like the effect that the repeal of protections will have on public safety. The Republican-led FCC voted in 2017 to roll back the popular rules, which prohibited broadband companies from blocking or slowing access to the internet in a 3-2 vote along party lines. The rules also barred internet providers from charging companies to deliver their content faster.”

Top line: “A judge has ruled in favor of Harvard University in a high-profile court case centered on whether the school’s admissions process forces Asian Americans to clear a higher bar to get in. Federal District Court Judge Allison D. Burroughs issued her decision Tuesday, saying “the Court finds no persuasive documentary evidence of any racial animus or conscious prejudice against Asian Americans.” In the decision, Burroughs said that while Harvard’s admissions program is “not perfect,” “ensuring diversity at Harvard relies, in part, on race conscious admissions.” The plaintiff, advocacy group Students for Fair Admissions (SFFA), accused Harvard of considering race too much and discriminating against Asian American applicants. SFFA President Edward Blum said in a statement that he was disappointed by the ruling and, “SFFA will appeal this decision to the 1st Court of Appeals and, if necessary, to the U.S Supreme Court.””

Top line: “Microsoft surprised onlookers with a pair of new dual-screen hardware devices it’s planning to release next holiday: The Surface Neo laptop and the Duo smartphone, which runs Google’s Android operating system rather than Microsoft Windows. The announcements came at the end of Microsoft’s annual hardware event, where it also introduced refreshed versions of its Surface tablets and laptops, and a new Surface that runs a Qualcomm low-powered chip based on a design from ARM — similar to those found in Apple’s iPad and most smartphones — rather than the Intel-based processors that traditionally run Windows PCs. It’s the third time Microsoft has unveiled an ARM-based tablet, but its past efforts failed at market because they could not efficiently run traditional Windows apps.”

9. Emotions run high in and outside of courtroom after Amber Guyger sentenced to 10 years for Botham Jean’s murder – CNN, Ashley Killough, Madeline Holcomb

Top line: “Inside the courtroom, many observers cried as Botham Jean’s brother forgave and hugged former Dallas police officer Amber Guyger, who had been convicted of murder in Jean’s death. Outside, protesters denounced the 10-year sentence Guyger got as too lenient. The conclusion of the trial mirrored the gamut of emotions displayed during the week-long proceedings, with Jean’s parents taking the stand with poignant testimony about their son, Guyger saying she wished she were the one who was shot and prosecutors describing the former cop as negligent in missing myriad signs that would have tipped her off that she was on the wrong floor, in the wrong apartment. Jurors convicted Guyger on Tuesday for murder in the fatal shooting of Jean. Wednesday, after hours of moving victim impact statements, the same panel sentenced her to 10 years in prison. She’ll be eligible for parole in five years.”

10. Victims of Las Vegas massacre – the deadliest US shooting – could get up to $800M from MGM – USA Today, John Bacon, Ed Komenda

Top line: “MGM Resorts International and lawyers representing victims and families in the Las Vegas shooting rampage that killed 58 people and wounded hundreds in 2017 reached a settlement deal that could total $800 million. The hotel giant and lawyers for the plaintiffs issued a statement saying the total settlement amount is expected to be $735 million to $800 million, depending on the number of people who elect to participate. Lawyers hope to complete the deal, which could involve thousands of people, by late 2020. Tuesday marked two years since Stephen Paddock fired into the crowd of 22,000 from the 32nd floor of Mandalay Bay hotel, owned by MGM, for more than 10 minutes before taking his own life. Investigators never determined a motive for the attack, the deadliest mass shooting in U.S. history.”