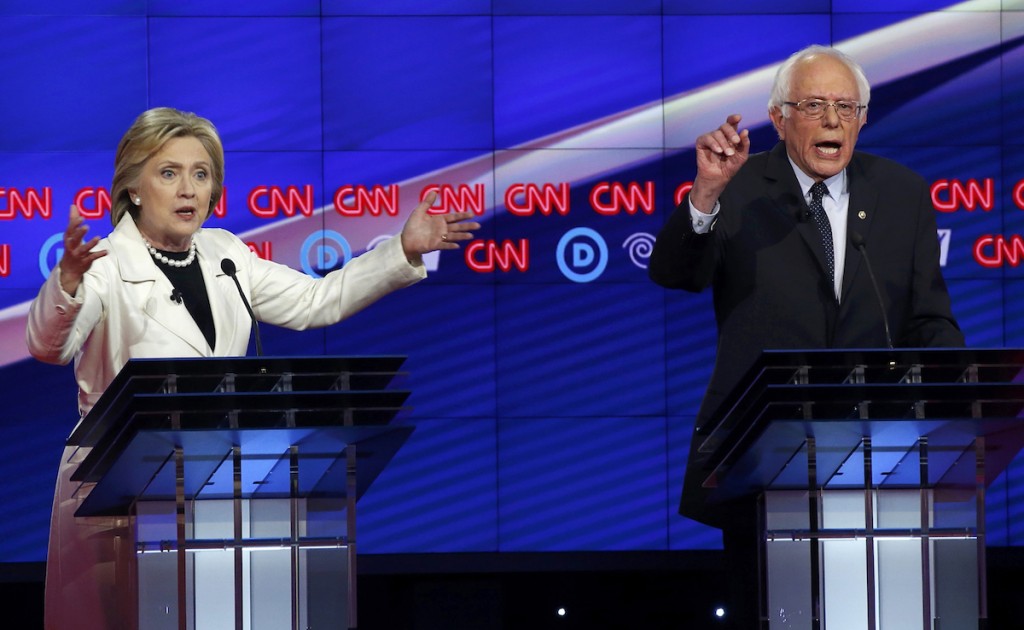 The Democratic presidential candidates faced off in their most combative debate of this election cycle Thursday night. They clashed on the economy, environment, international affairs, guns and judgment. The attacks came days before New York’s pivotal primary, when Clinton aims to add to her delegate lead and momentum and Sanders looks to prove his viability in the race going forward. We spoke to CNN Politics Managing Editor Z. Byron Wolf to recap the debate’s biggest moments and explain what’s on the line in the Empire State.

But there were a number of other notable moments, too. They tangled on the issue of climate change. Both think it is a huge problem and that humans contribute and that something needs to be done. But he opposes the international legal frameworks she supported as secretary of state because they don’t go far enough. She says they were the best deal possible. This was a window into Democrats’ choice. He wants them to “think big.” She wants to get things done. It’s easy to diagnose problems she said at one point. It’s harder to do something about them.

She fared worse on transparency. Sanders promised to release his tax returns from last year tomorrow. He said they won’t be exciting; his wife prepares them and he doesn’t have millions of dollars of income from Wall Street speeches in there.

Clinton, meanwhile, made no such promise to release transcripts of the speeches she made on Wall Street. It’s becoming a persistent problem for her.

Both also expressed regret about ’90s era crime legislation her husband [former President Bill Clinton] signed and Sanders supported in the House. That was a first.

Finally, Sanders, during discussion of Israel, criticized Clinton for not mentioning Palestinian children during her recent speech to an American Jewish group. That was notable since the first Jewish candidate to make it this far was, by proxy, standing up to the Israel lobby.

Who won the judgment debate?
Draw. It started the night with a bang, but both candidates were ready for it. Sanders effectively said she’s been on the wrong side of many issues Democrats care about today. She effectively said he has no concrete plan to deliver on his promises.

On what issues was Clinton most helped/most hurt?
She was most hurt on transparency. It goes to her credibility—an area where polls show she already has problems. She did a good job arguing that Sanders doesn’t have specific plans to make good on his promises.

On what issues was Sanders most helped/most hurt?
Sanders does not have the best record on guns. He hasn’t changed his tune on them either. Clinton was effective in arguing against his votes on background checks.

But he is a truly effective debater. Specifics don’t make for good debate fare. Sanders exhorts the crowd to think big. He says what they want to hear on banks, on medicare for all, on everything. The crowd was into it.

Clinton has a large polling lead in New York. How will tonight’s faceoff impact the outcome of the New York primary?
It likely won’t. Sanders clearly has momentum. But polls suggest she has a big lead. The election is just a few days away and these candidates are both known quantities in New York. But time will tell.

Is there a path to the nomination for Sanders if he wins or if he loses in New York?
All of the states award delegates proportionally in Democratic primaries, which means the loser could still come away with a fair number of delegates.

But it will be a huge blow to Clinton if she loses New York. If Sanders is to win, he likely needs a strong showing and perhaps a win in New York. Any path to victory for him relies on shaking the resolve of the super delegates, who so far overwhelmingly back her. He needs to win and win decisively enough to make them start to peel off.

Will there be a casualty of the more contentious tone we’re seeing among the Democratic candidates?
This Democratic race is getting very very interesting. You might think a contentious tone would hurt the ultimate winner come November. There’s an important piece of evidence that it doesn’t. His name is Barack Obama. The level of contentiousness in this primary, even after tonight, has nothing on Clinton vs. Obama in 2008.

Did Sanders or Clinton expose vulnerabilities tonight that will echo in a potential general election?
The asterisk to the earlier answer is her transparency and credibility. If he goes too far making her seem untrustworthy, that could follow her in the fall. You can bet Republicans will make the same arguments.

Read more about the Thursday’s debate and the match-ups to come in CNN Politics’ Flipboard Magazine.