How One Flipboard Fan Reached 100,000 Followers 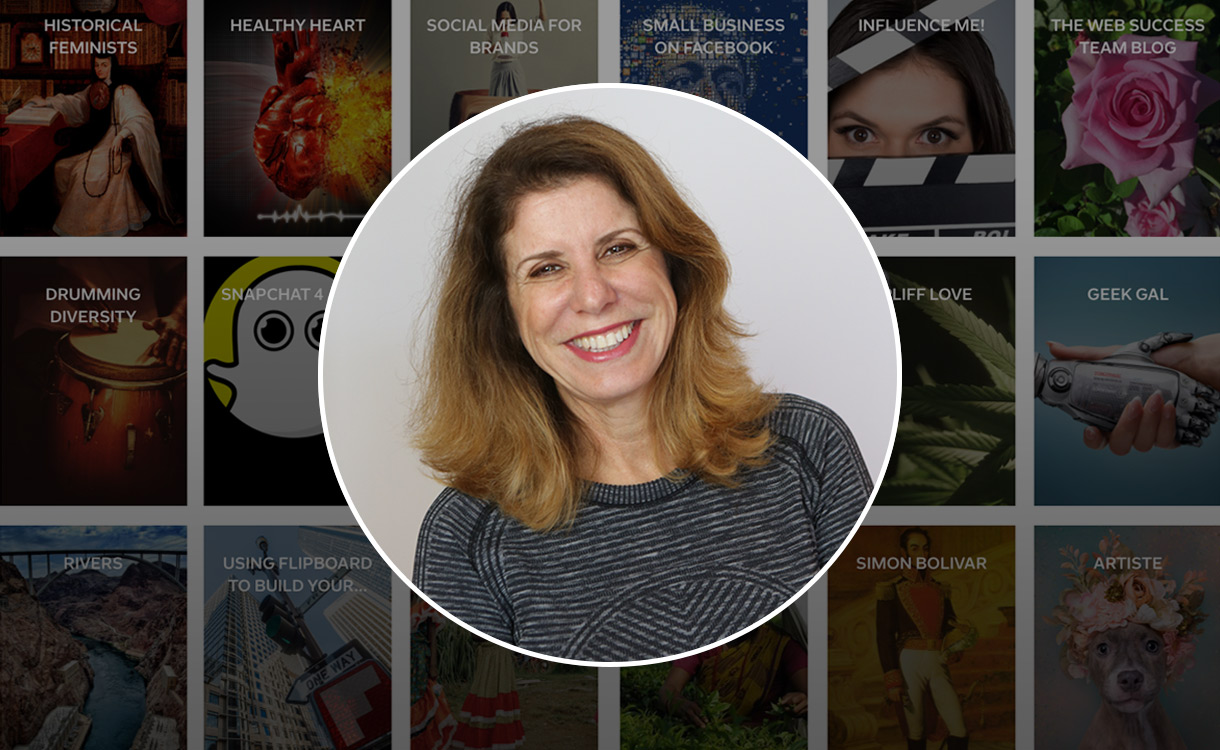 If you’ve ever wondered how the Flipboard fans with thousands of followers manage to achieve such followings, you’re in good company. While high numbers aren’t always indicative of success, they can, at times, be suggestive of high quality engagement. I’ve been working hard to increase my personal following in order to share some tips with the #FlipBlogger community, but when I came across someone celebrating their 100,000th follower, I decided to sit down for a little chat to hear her insights.

The #FlipBlogger in question is Janette Speyer, digital media marketer by day, Flipboarder by night. No, really, but we’ll get to that in a minute.

Janette first joined Flipboard back in 2013 because she saw the value in a platform that bridged the gap between traditional magazines and digital content sites. She’s since been an avid consumer and curator of news and has built an impressive following for herself and for a number of her digital marketing clients. Her advice to anyone looking to build up their own follower numbers is as follows:

It might seem a little self-evident, but the first thing that Janette recommends for growing your following on Flipboard is to follow people. Janette herself specifically looks for people with a full bio with photo who have at least two magazines in their account. Start slow, but try to follow a certain number each week. You can find interesting people by searching #MagsWeLove or #FlipboardFriday on Twitter, or by seeing who is flipping interesting items in the topics that you follow. Be sure to take a moment to flip or like some of the articles or images that your new connection has shared. It’s a kindness, but also a good way to show them that you might be an interesting person to connect with in turn. 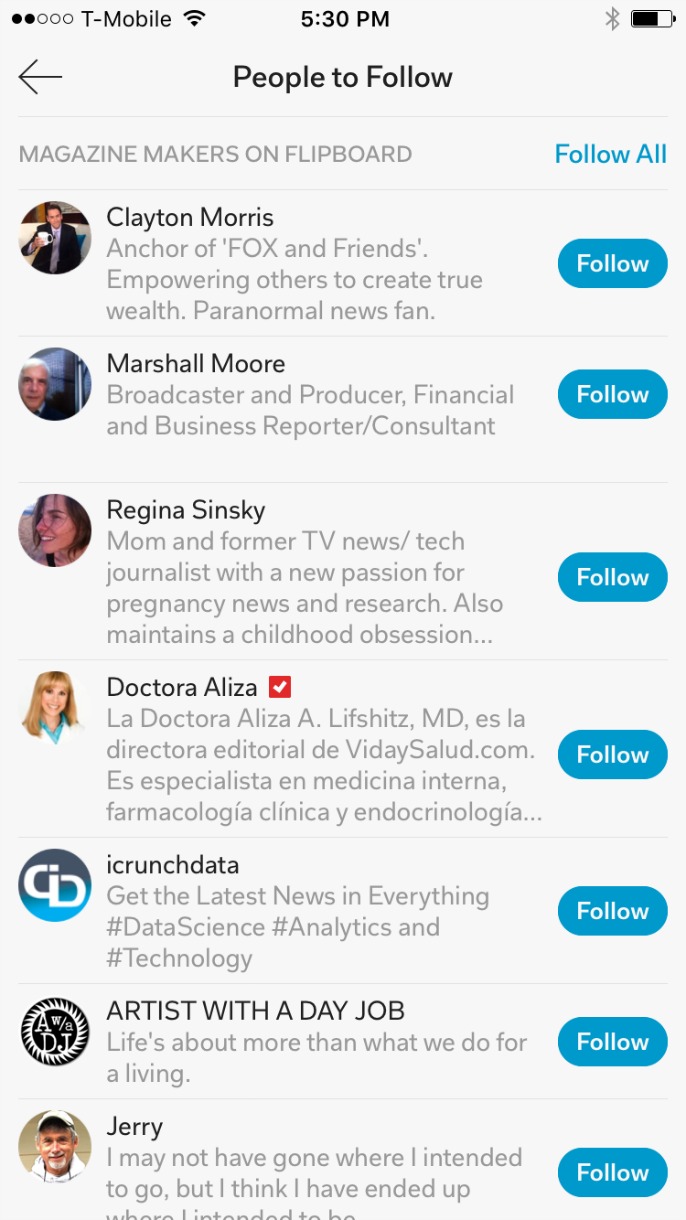 This is where things get a little interesting. If you’re looking to build a strong, engaged following, you have to work at it just like on Twitter, Instagram or any other social platform. Janette suggests taking the time to dive into your notifications to see who’s liking what you’re sharing and to see what it is they are liking.

Click over to the profiles of the people liking or commenting on things you’ve flipped. What do they share? What are they interested in? Who is following them? Have they created magazines that you want to follow? Have they added anything you could re-flip? Can you connect with them on Twitter and let them know you’ve flipped something they shared?

All of these little actions go a long way towards making your followers feel valued, which, in turn makes them more loyal and engaged with you. 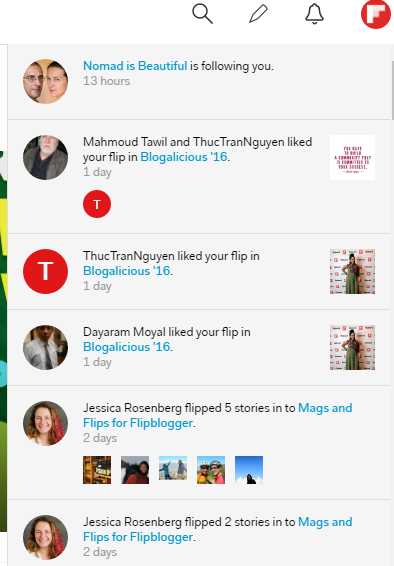 It’s a simple concept: give the people more of what they like. If people are flipping and liking things that you have shared, then it stands to reason to give them more of it. But it goes beyond that, too. If you’ve noticed that the person who loves to re-flip what you’ve added to magazines has three magazines about chocolate desserts, then, by all means, create a magazine about chocolate desserts! The caveat here is that you do this authentically. If you’re not into chocolate, then that’s not the right path to follow, but odds are that your fan will have another topic that you two can connect over. The goal is to create something of value to both you and the people who follow you, and, by doing so, demonstrating that you are in tune with your audience and their interests. 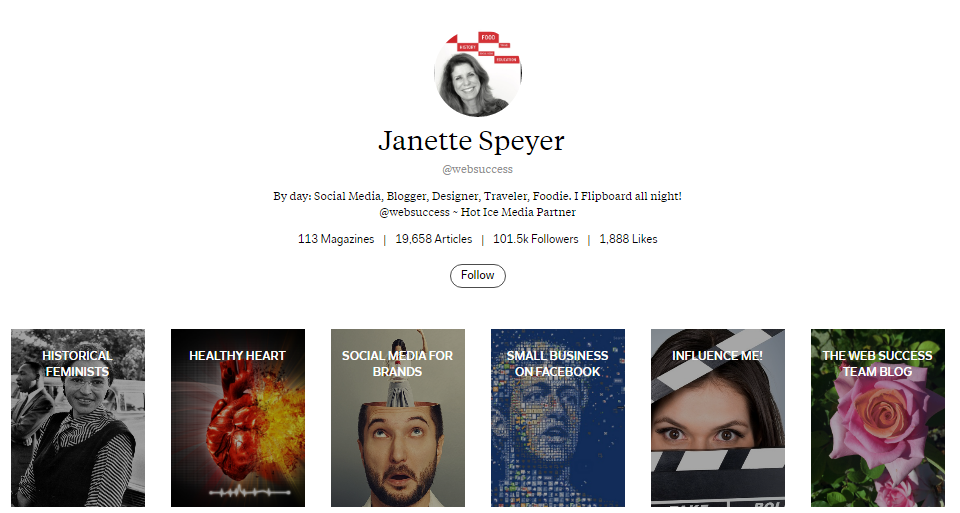 It might be tempting to think that this is a numbers game. It’s not. It’s an engagement game, one in which you get what you give. In order to gain loyal followers who will re-flip, like or comment when you share something that appeals to them, you have to be out there doing a lot of re-flipping, liking and commenting.

Start by engaging with your followers, but don’t forget to reach beyond that pool. Janette has found that when she comments on articles shared by Flipboard’s Newsdesk, Flipboard Picks or another of the magazines curated by the main Flipboard accounts she often sees a bump in her following and engagement.

This is where that comment I made earlier about Janette being a Flipboarder by night comes into play. It takes time to read, like, comment, flip, curate. Time that Janette finds usually in the evening, when she’s settled on her couch with the TV on. You don’t reach 100,000 followers without investing a bit of time and effort, but you don’t have to give up on your favorite pastimes to get it accomplished! 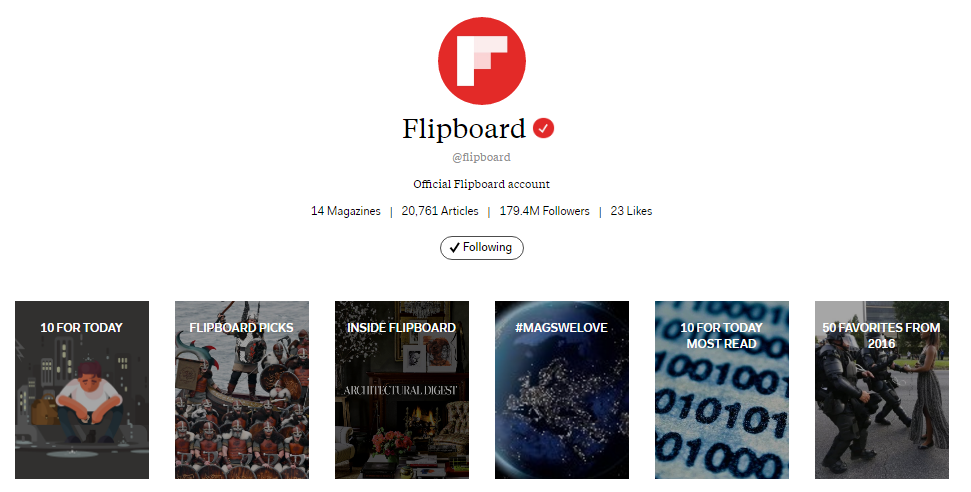 Whether you have five minutes or an hour each day to dedicate to building your Flipboard following, Janette urges you to make use of the time you do have. When you’re in the grocery store lane or waiting for your coffee to be prepared, pop in. Leave a comment. Flip something of interest to your community. Follow someone new. Check out a popular topic. Share a Flipboard Magazine to Twitter. The consistency and continued engagement will pay off—you’ll find your numbers steadily growing, but more importantly, you’ll find that you connect with more and more people who make your Flipboard experience increasingly rich and vibrant.

Have you found other ways to increase your engagement and following? Come share with us on Twitter with the #FlipBlogger hashtag.