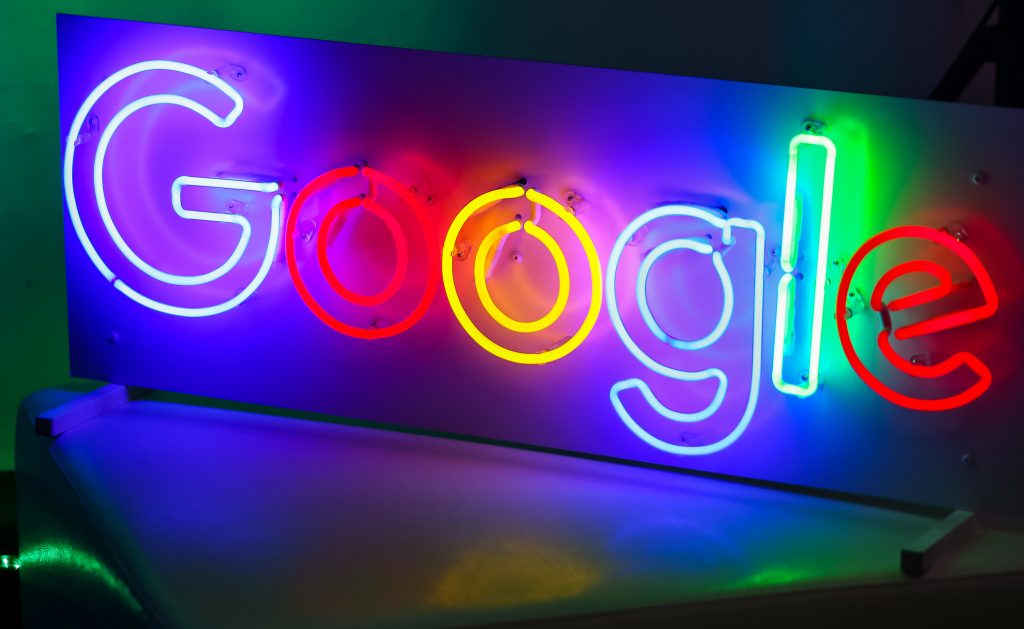 WARSAW, POLAND MARCH 28: (SOUTH AFRICA AND POLAND OUT) Google logo seen during the CEE Innovator Summit on March 28, 2017 in Warsaw, Poland. During the meeting the heads of the governments of the Visegrad Group (V4) countries attended the summit.(Photo by Karol Serewis/Gallo Images Poland/Getty Images)

This week in tech, Google hit back at accusations of discrimination while banding with Amazon, Microsoft and others to request to the new FCC Chairman that net neutrality stay the same. Uber’s head of communications announced she was leaving, just a few days after the story broke that Uber’s “Hell” program was spying on and targeting Lyft and other competitors. And in more exciting news, Apple might secretly be working on technology to allow people with diabetes to noninvasively monitor their glucose and turns out, according to science, Facebook does make you miserable. Make sure you follow our technology magazine to never miss an important story.

Top line: “Google has discriminated against its female employees, according to the US Department of Labor (DoL), which said it had evidence of “systemic compensation disparities”.

“As part of an ongoing DoL investigation, the government has collected information that suggests the internet search giant is violating federal employment laws with its salaries for women, agency officials said.”

Top line: “The Internet Association, a lobby repping Amazon, Microsoft, Google, Facebook, Netflix and others, met with FCC Chairman Ajit Pai earlier this week and filed a summary of the meeting. It sounds like they’re content with net neutrality rules as they are:

‘The internet industry is uniform in its belief that net neutrality preserves the consumer experience, competition, and innovation online. In other words, existing net neutrality rules should be enforced and kept intact.’”

Top line: “In its quest to ensure Lyft remains in second place, Uber reportedly ran a program that exploited a vulnerability in its rival’s system. According to The Information, the ride-hailing company’s covert software-based program called ‘Hell’ spied on its staunchest competitor’s drivers from 2014 to early 2016. It’s called Hell, because it served as the counterpart to ‘God View’ or ‘Heaven,’ Uber’s in-company app that tracked its own drivers and passengers. Unlike God View, which was widely available to corporate employees, only top executives along with select data scientists and personnel knew about Hell.

“The program apparently started when Uber decided to create fake Lyft rider accounts and fooled its rival’s system into thinking they were in various locations around the city. Those fake riders were positioned in a grid to give Uber the entire view of a city and all of Lyft’s drivers within it. As a result, the company can see info on up to eight of its competitor’s nearest drivers per fake rider.”

Top line: “According to an internal email from Uber CEO Travis Kalanick, the company’s high-profile head of communications and policy Rachel Whetstone is departing after two years.

“Sources close to the car-hailing company said that the decision to leave was multi-faceted, including Whetstone’s lack of appetite for even more drama after running comms at Google for many years before her stint at Uber.”

Top line: “The FDA approval will likely reignite a long-simmering debate about when and how such tests should be used. Even when there are strong links between certain gene variants and medical conditions, genetic information often remains difficult to interpret. It must be balanced against other factors including health status, lifestyle and environmental influences, which could sharpen or weaken risk. If disease risk news is delivered at home—without a genetic counselor or doctor on hand to offer context—many geneticists fear it can lead to unnecessary stress, confusion and misunderstandings.”

6. A New, More Rigorous Study Confirms: The More You Use Facebook, the Worse You Feel—Harvard Business Review, Holly B. Shakya and Nicholas A. Christakis

Top line: “A Deloitte survey found that for many smartphone users, checking social media apps are the first thing they do in the morning – often before even getting out of bed. Of course, social interaction is a healthy and necessary part of human existence. Thousands of studies have concluded that most human beings thrive when they have strong, positive relationships with other human beings.”

Top line: “Burger King is unveiling a horrible, genius, infuriating, hilarious, and maybe very poorly thought-out ad today that’s designed to intentionally set off Google Homes and Android phones. The 15-second ad features someone in a Burger King uniform leaning into the camera before saying, ‘OK Google, what is the Whopper burger?’

“For anyone with a Google Home near their TV, that strangely phrased request will prompt the speaker to begin reading the Wikipedia entry for the Whopper. It’s a clever way of getting viewers’ attention, but it’s also a really quick way of getting on viewers’ nerves — just look at the reactions people had when ads accidentally triggered voice assistants in the past.”

8. How Technology Has Failed to Improve Your Airline Experience—New York Times, Farhad Manjoo

Top line: “People in Silicon Valley pride themselves on their capacity to upend entrenched industries. Uber defeated taxi cartels. Airbnb made getting a room cheaper and more accessible. Streaming services are undoing the cable business. Yet the airline industry has not just stubbornly resisted innovation to improve customer service — in many ways, technology has only fueled the industry’s race to the bottom.

“People in Silicon Valley pride themselves on their capacity to upend entrenched industries. Uber defeated taxi cartels. Airbnb made getting a room cheaper and more accessible. Streaming services are undoing the cable business. Yet the airline industry has not just stubbornly resisted innovation to improve customer service — in many ways, technology has only fueled the industry’s race to the bottom.”

Top line: “If you live in an apartment or smaller home, you’re going to see a lot more benefit from one very powerful router rather than just a smaller mesh setup. The former is all about maximizing connection speed whereas the latter is intended to kill dead spots hiding in remote nooks and crannies. Netgear has been making home routers for two decades, and even though it too has waded into the world of mesh, it clearly still believes that big antennas and lots of power can make a difference.”

10. Apple has a secret team working on the holy grail for treating diabetes—CNBC, Christina Farr

Top line: “Apple has hired a small team of biomedical engineers to work at a nondescript office in Palo Alto, California, miles from corporate headquarters.

“They are part of a super secret initiative, initially envisioned by the late Apple co-founder Steve Jobs, to develop sensors that can noninvasively and continuously monitor blood sugar levels to better treat diabetes, according to three people familiar with the matter.”

~LindseyWeb is reading Diversity in Tech and Women’s Pay Gap