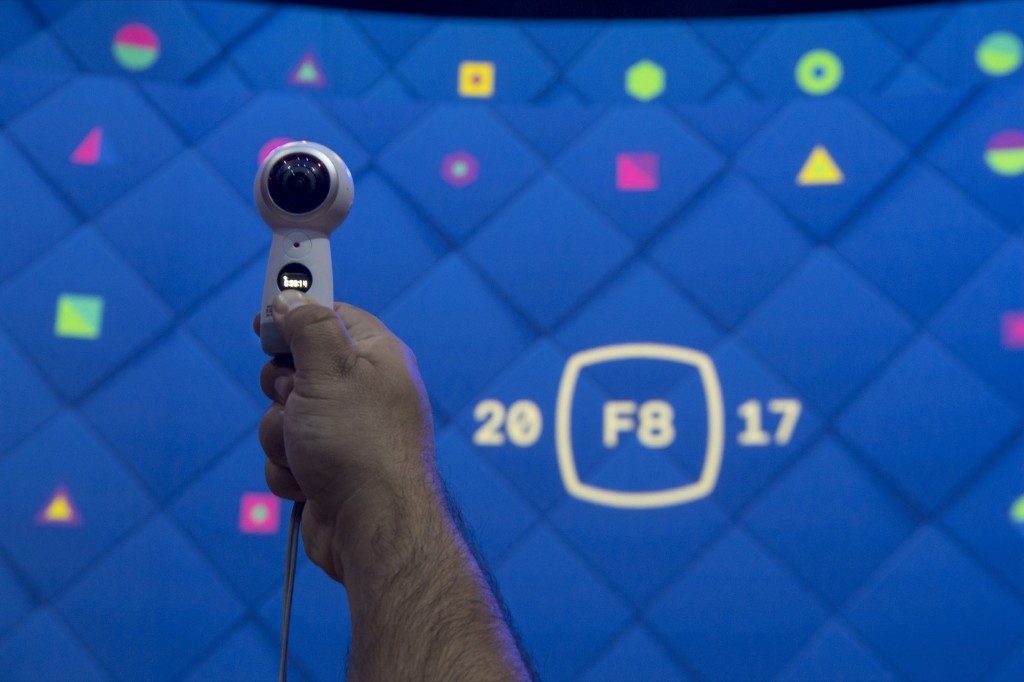 An attendee uses a Samsung Electronics Co. Gear 360 camera before the beginning of a keynote address during the Facebook F8 Developer Conference. David Paul Morris/Bloomberg

Facebook made a lot of news this week at their annual F8 conference—revealing progress on AI-powered cameras, VR hangouts, a 360-degree camera and technology that would allow you to type using just your brain. Earlier this week, however, Facebook Live came under fire when a man taped a video in which he killed another man and the bragged about it to a live audience. (This was a lot more serious than earlier allegations that Facebook had ripped off Snapchat, announcing extremely similar new features on Instagram.) Meanwhile, Uber lost a boatload of money—and not because of the market—while Airbnb faced some tough adversaries: the hotel industry.

Make sure you follow our technology magazine to never miss an important story.

Top line: “Facebook’s annual developer conference, F8, takes place this year on April 18th and 19th, 2017, and the company is expected to share its vision on the future of VR, 360-degree imaging, bots on Messenger, and more. Will Facebook continue to copy Snap? Or will it finally carve its own niche among the crowded social space? What’s new with Workplace, its enterprise product to take on Slack?”

‘We are working on a system that will let people type with their brains. Specifically, we have a goal of creating a silent speech system capable of typing 100 words per minute straight from your brain – that’s five times faster than you can type on a smartphone today,’ Facebook said on its official blog Wednesday.”

Top line: “Imitation is nothing new in technology. It’s the circle of tech life. The difference: while Snapchat struggles for revenue; Facebook brings in over $8 billion a year. Its platforms – from ads, to video, to its eBay rival Marketplace – are obsessively honed to bring in revenue and scale to epic proportions. (Zuckerberg at F8 even said as much.) Which means that while Snap Inc might be a small hurdle, Facebook’s closest rival – for attention, talent, and ad revenue – is Google, or rather, Alphabet.”

Top line: “But after the product hit the market, some investors were surprised to discover a much cheaper alternative: You can squeeze the Juicero bags with your bare hands. Two backers said the final device was bulkier than what was originally pitched and that they were puzzled to find that customers could achieve similar results without it. Bloomberg performed its own press test, pitting a Juicero machine against a reporter’s grip. The experiment found that squeezing the bag yields nearly the same amount of juice just as quickly—and in some cases, faster—than using the device.”

Top line: “The ride-hailing company lost $991 million in the last three months of 2015, according to figures it shared with Bloomberg News. Its total loss for all of 2016 was an equally impressive $2.8 billion.

“Those losses aren’t connected to a giant failed merger, or closing down a business unit, or a collapse in the price of oil. They’re not caused by a once-in-a-generation financial crisis. Uber just spends way more money that it takes in.”

Top line: “Legislation for live video is tricky, and particularly uncharted territory in Germany. Efroni says he’s unaware of any laws specific to Facebook Live, but that the challenge it presents is multifaceted. ‘The law should obviously prohibit the live broadcasting of crimes, but how do you enforce such a law without shutting down the platform completely?’ He asked. ‘I think the solution lies in a combination of measures that are both legal and technological.’”

7. Courts Are Using AI to Sentence Criminals. That Must Stop Now.—Wired, Jason Tashea

Top line: “Currently, courts and corrections departments around the US use algorithms to determine a defendant’s “risk”, which ranges from the probability that an individual will commit another crime to the likelihood a defendant will appear for his or her court date. These algorithmic outputs inform decisions about bail, sentencing, and parole. Each tool aspires to improve on the accuracy of human decision-making that allows for a better allocation of finite resources.”

Top line: “The efforts were spearheaded last year by Katherine Lugar, chief executive of the American Hotel and Lodging Association. The trade group began to form alliances with politicians, affordable housing groups and neighborhood associations. The industry also forged relationships with hotel labor unions — which it typically faces off against on many issues — about dealing with Airbnb.

“The main prongs of the association’s plan to constrain Airbnb include lobbying politicians and state attorneys general to reduce the number of Airbnb hosts, funding studies to show Airbnb is filled with people who are quietly running hotels out of residential buildings and highlighting how Airbnb hosts do not collect hotel taxes and are not subject to the same safety and security regulations that hotel operators must follow.”

Top line: “Dr. Vikram Rao, a neurologist at UC San Francisco’s Epilepsy Center, called the system ‘a game changer’’ because it helps a large group of patients who have no other alternative to reduce or end their seizures. He compared the system to cardiac pacemakers that detect abnormal heart rhythms, then deliver electrical stimulation to prompt the heart to beat normally. ‘That’s an analogy people can relate to,’ Rao said.”

10. How Peer-To-Peer Payment Pioneer Venmo Grew Up And Got Serious—Fast Company, Ruth Reader

Top line: “Today, Venmo is the service to beat in the growing peer-to-peer payments space. It shuttled nearly $18 billion between people last year—$5.6 billion in the final quarter alone, up 126% from the previous year. (Though Venmo doesn’t release user figures, Verto Analytics estimates it has more than 7 million active monthly users, which still pales next to PayPal’s 197 million accounts.) The app’s growth is all the more remarkable for the fact that the product itself has remained relatively unchanged since joining the PayPal fold in 2013. For although Venmo’s founders had a prescient understanding of the millennial mind-set, they knew little about the financial regulations that applied to their product. For the past few years, Venmo has been consumed with turning itself from a move-fast-and-break-things kind of company into something more upstanding—and substantial.”