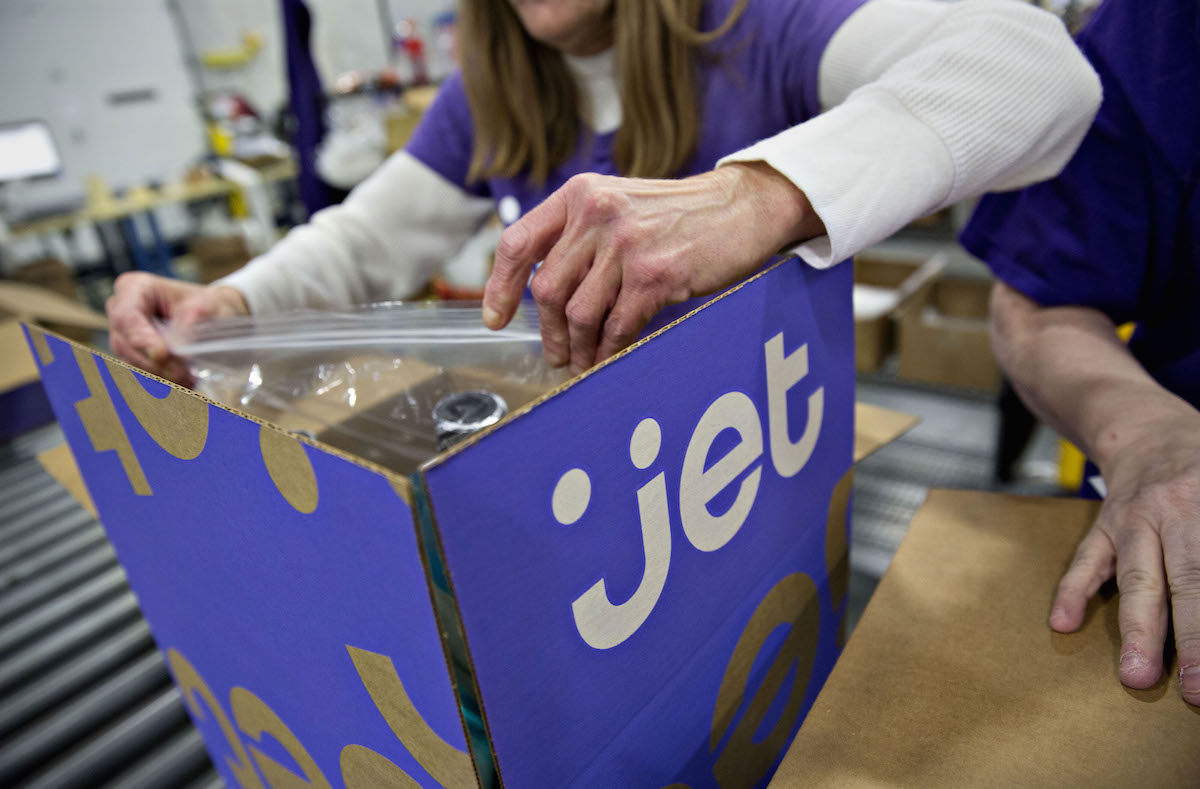 An employee double checks the contents of a customer order before sealing the package for shipment at the Jet.com Inc. fulfillment center on Cyber Monday in Kansas City, Kansas, U.S., on Monday, Nov. 30, 2015. Daniel Acker/Bloomberg

1.Walmart bets $3 billion that Jet.com is the key to gaining on Amazon—Recode, John Murrell

Top line: “Walmart, the world’s largest retailer, announced it will acquire two-year-old online retailer Jet.com for $3.3 billion in cash and stock in the largest-ever acquisition of an e-commerce company.”

Top line: “Four years after the US Army deemed it too expensive, the hybrid airship—a carbon-composite cross between a zeppelin, a helicopter and an aeroplane—was gently piloted into the open in a delicate five-minute operation.”

Top line:  “We’ve all known that the streaming video service has been emphasizing its subscription offering over its free service for the past couple years. But Hulu’s deal to license its free content to Yahoo, announced Monday, is the last nail in the coffin. Over the next few weeks, Hulu says, it will phase out its free offering, which until now has allowed people to watch the most recent five episodes of several ABC, NBC and Fox shows for free, after an eight day delay.”

Top line: “The one thing you never hear in Silicon Valley is an entrepreneur admit they copied someone else. Yet there in the headquarters of Facebook, the world’s most prolific product cloner, Instagram CEO Kevin Systrom surprised me…‘Totally,’ Systrom interrupted me. ‘They deserve all the credit.’”

Top line: “Its website confirms that some of its users lost bitcoin. The company’s head of community and product development, Zane Tackett, has been answering questions on Reddit’s Bitcoin community forum, and stated that 119,756 bitcoin were lost.”

Top line: “In a change to its news feed algorithm on Thursday, Facebook said certain types of headlines would be classified as clickbait, those that ‘withhold or distort information.’ Those stories will then appear less frequently in users’ feeds, the company said.”

7. The next MacBook Pro may have a fingerprint-reading power button—Engadget, Jon Fingas

Top line: “Just how it would work isn’t clear, but it’s reasonable to imagine logging in without your usual password or taking advantage of macOS Sierra’s Apple Pay support when shopping online.”

Top line: “The latest report reaffirms the long-running rumors that Apple’s next iPhone will offer only modest changes. With the iPhone sales on a downslide over the past few quarters, Apple needs something big to draw in buyers. Another much-rumored feature also served up by Bloomberg’s sources is a dual-camera system for the iPhone 7 Plus.”

Top line: “That’s right, Samsung jumped right from last year’s Note 5 to the Note 7, skipping the Note 6 entirely. And that’s a little weird, but easy enough to wrap your brain around because the Note 7’s molded screens, 12-megapixel camera, expandable storage and water-resistant coating bring it closer to this year’s S7 series than to last year’s Note.”

Top line: “If the loquacious online Apple rumor mill is right, next month the company will release both an updated operating system for its existing wearable and a new generation Apple Watch featuring an updated design, a longer battery life and ‘the ultimate selfie camera.’”