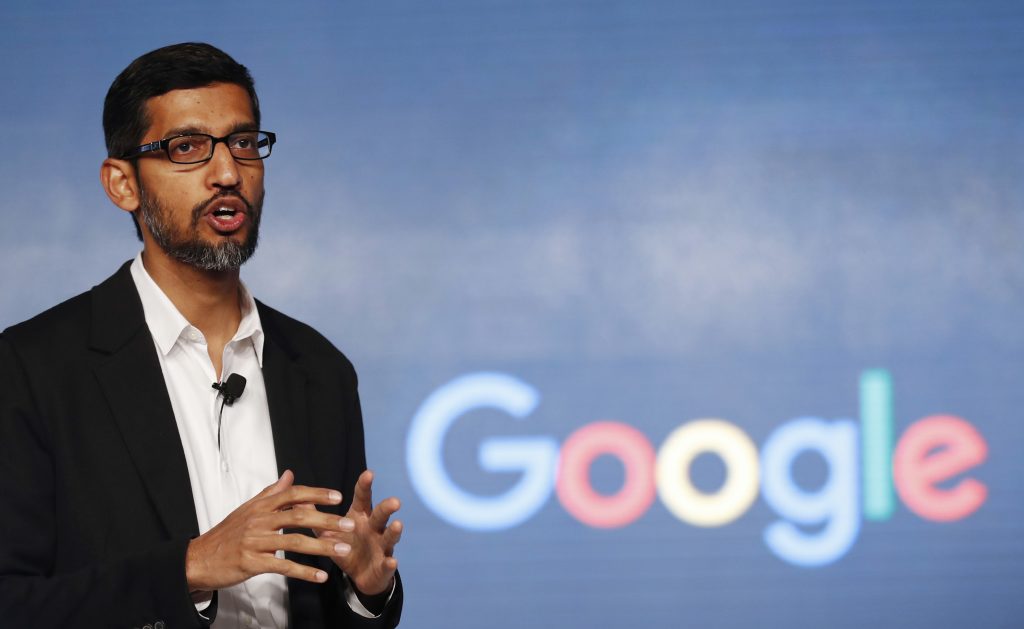 Google CEO Sundar Pichai speaks during a news conference on Google’s collaboration with small scale local businesses in New Delhi. U.S. tech companies fear the Trump administration will target a visa program they cherish for bringing in engineers and other specialized workers from other countries. (AP Photo/Tsering Topgyal, File)

From Lady Gaga’s Super Bowl drones to YouTube’s new live streaming tools, this week was full of launches. What didn’t quite launch? Twitter’s Q4 for earnings, which were the slowest since going public in 2013. That plus Pinterest’s “Shazam for objects” and Facebook’s filter bubble. Read more about these stories below, as well as other top stories of the week, from the Flipboard Technology section.

Top line: “Twitter announced Tuesday that it is expanding efforts to protect its users from abuse and harassment, the latest milestone in a broader, growing corporate campaign to crack down on online hate. The social media giant said it has begun identifying people who have been banned for abusive behavior and it will stop them from creating new accounts. The company said its changes, which also include a new ‘safe search’ feature, will be implemented in the coming weeks.”

3. What Snap’s I.P.O. Filing Reveals About the Company—New York Times

Top line: “Prospective investors will be drawn to how quickly Snap has grown its advertising business in roughly two years, with the company showing a nearly sevenfold increase between 2015 and last year. The question is how long the start-up can maintain anywhere close to that kind of growth.”

Top line: “YouTube originally announced mobile live streaming back in mid-2016, but so far it had only made the feature available in limited form to a select group of partners. Today the company is expanding its reach to anyone with more than 10,000 subscribers ahead of a full rollout later in 2017.”

Top line: “Pinterest today introduced Lens, a new visual search tool that uses machine vision to detect objects in the real world and suggest related items on the service. Lens, which is now in beta, is a tool inside the Pinterest mobile app that functions as a kind of Shazam for objects. Point it at food, furniture, or even the night sky, and Pinterest will return objects that it believes are related.”

6. Hack knocks out a fifth of the Dark Web—Engadget, Jon Fingas

Top line: “An Anonymous-linked hacker speaking to Motherboard brought down about a fifth of the Tor network’s ‘secret’ websites (over 10,000 of them) in a claimed vigilante move. The intruder decided to attack a Dark Web hosting service, Freedom Hosting II, after discovering that it was managing child porn sites it had to be aware of — they were using gigabytes of data each when the host officially allows no more than 256MB. Each site had its usual pages replaced with a message that not only chastised FH2, but offered a data dump (minus user info) and explained the nature of the hack.”

8. For Protesters, Doing It for the ’Gram Isn’t a Bad Thing—Vanity Fair, Hilary Weaver

Top line: “‘Doing it for the ‘gram’ implies tackiness—someone acting only because it makes a good photo op. But in the case of funny protest signs (and costumes) that go viral with their political message intact, or even a social-media feed full of protest selfies, doing it for the ‘gram actually serves a purpose for once.”

Top line: “To better understand how different audiences experience the same event on Facebook, BuzzFeed News video captured two different Facebook livestreams of the press conference last Thursday — one from Fox News and one from Fusion. We scraped comments from the two streams and tallied the total number of Facebook reactions (like, love, laugh, angry, sad, and wow). We also collected and compared comments from the moment of the press conference most frequently mentioned and quoted by both right and left-leaning news organizations.”

Top line: “Preparations kicked off in early December, when Intel’s engineers started wading into the mind-numbing logistics of choreographing 300 dancing drones. Do they fly inside the stadium? How are they integrated into what Lady Gaga is doing onstage? Is the stadium’s domed roof open or closed? ‘The whole halftime is a huge execution monster of an exercise,’ says Anil Nanduri, who leads Intel’s drone efforts.”