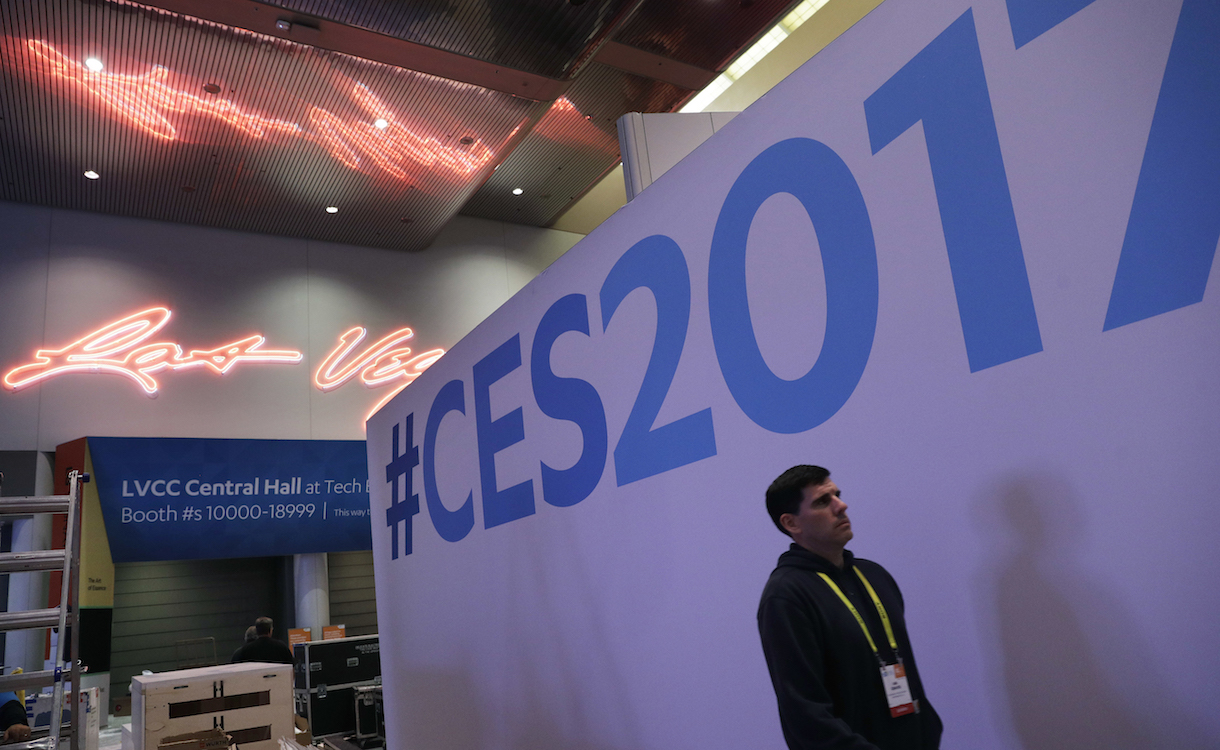 A man walks by a sign during setup for CES International, Tuesday, Jan. 3, 2017, in Las Vegas. The show runs from January 5-8. (AP Photo/John Locher)

In other news, Bitcoin prices fell dramatically Thursday after starting the week at an all time high, Apple removed The New York Times apps from Chinese App Store due to Chinese government requests and an ex-Snapchat employee alleged the company inflated growth figures ahead of its planned IPO.

Top line: “The Lenovo system carries eight microphones, which can pick up voice commands from up to 16 feet away, Lenovo said. There is volume control and a trigger button, although the device has no dedicated mute button, unlike the Echo products and the Google Home. It weighs 1.67 pounds, which is on par with the full-size Echo and heavier than the Google Home.”

2. BMW just made a big move to take on Tesla and Google—Business Insider, Danielle Muoio

Top line: “The company said it will test 40 self-driving cars in the second half of 2017 through a partnership with Intel and Mobileye. The partnership, first announced in July, will allow the trio to collect data in order to release a production-ready, self-driving car in 2021.”

3. Blackberry is back and reinventing the keyboard—Wired UK, Amelia Heathman

Top line: “TCL, Alcatel’s parent company and the firm that now owns the rights to produce Blackberry-branded devices has released a teaser video of its new smartphone. And this is big news because it has a keyboard.”

Top line: “The value of digital currency bitcoin crashed on Thursday, falling by more than a fifth just as it appeared to be at an all-time high. The price of one bitcoin abruptly fell from $1,161 (£942) to $889 before it stabilised at around $950.”

Top line: “Anthony Pompliano, who was the company’s growth lead, alleges that he was fired after just three weeks with the company because he refused to go along with Snapchat’s plans.”

Top line: “In a statement, an Apple spokesperson explained that the apps in question were in violation of local regulations, but that once the issues had been resolved, the apps would be made available again.”

7. Zuckerberg’s 2017 challenge is to meet and listen to people in all 50 states—TechCrunch, John Constine

Top line: “Zuckerberg wants Facebook to be a town square, not just a traditional media or tech company, and that means hearing out all its constituents. The inherent media characteristics of Facebook, like its algorithm that chooses what people see and its content policies, mean the company must work extra hard to remain a level-playing field for ideas while maintaining civility.”

Top line: “Clapper’s testimony to the Senate Armed Services Committee was short on concrete evidence of Russian activities, but it raised the stakes in the intelligence community’s standoff with Trump. Clapper indicated the agencies he leads would not back down in their assessment, even if that threatens a prolonged crisis of confidence with their next commander in chief.”

9. We now know when Twitter will shut down Vine—Mashable, Marcus Gilmer

Top line: “In a tweet posted on Wednesday afternoon, the app confirmed it will cease to exist as we know it on Jan. 17, completing its regeneration to ‘Vine Camera.’”

Top line: “Facebook again grabbed the number one spot on the list, with more than 146 million average unique users per month, and 14 percent growth over last year. In fact, Facebook scored several spots on the top 10 chart, thanks to Messenger (#2) and Instagram (#8) – the latter which also showed some of the highest year-over-year growth, up 36 percent from 2015.”