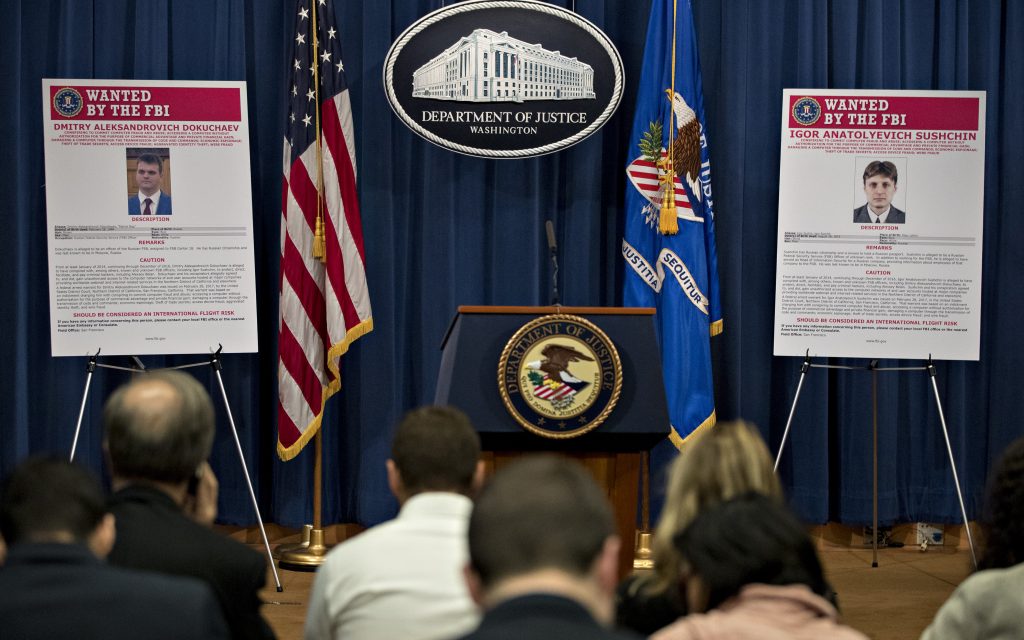 Wanted posters for Igor Anatolyevich Sushchin, right, and Dmitry Aleksandrovich Dokuchaev sit on display before a news conference at the Department of Justice in Washington, D.C., U.S., on Wednesday, March 15, 2017. The U.S. charged four people, including two Russian intelligence officers, over the theft of hundreds of millions of accounts of Yahoo Inc. users from a computer breach that threatened to derail its acquisition by Verizon Communications Inc. Photographer: Andrew Harrer/Bloomberg via Getty Images

Two other people, one Russian and one Canadian, were also charged in connection with the hacks, which are believed to be among the largest ever.’”

Top line: “In a blog post, the company announced it is adding language to its policies to make clear developers are not allowed to use Facebook or Instagram to make tracking software.

“’Over the past several months we have taken enforcement action against developers who created and marketed tools meant for surveillance, in violation of our existing policies; we want to be sure everyone understands the underlying policy and how to comply,’ wrote Rob Sherman, Facebook’s deputy chief privacy officer, in the blog post.”

Top line: “But when it comes to what is under the hood, an array of lesser-known companies will most likely supply the technology required to bring driverless cars to the masses. And in a $15.3 billion deal announced on Monday, Intel moved to corner the market on how much of that technology is developed.

The chip maker’s acquisition of Mobileye, an Israeli company that makes sensors and cameras for driverless vehicles, is one of the largest in the fast-growing sector and sets the stage for increasing competition between Silicon Valley giants as well as traditional automakers over who will dominate the world of autonomous cars.”

Top line: “The site has followed the example of Facebook, Twitter and many others after the photo sharing site was blocked in China, according to data from censorship monitoring organization GreatFire. GreatFire checks a range of the internet’s top websites for accessibility in China on a regular basis, and its system noted that Pinterest.com has been unavailable in China for the past seven days.”

Top line: “Lyft’s customer base has grown 7% since Jan. 29, when the company tried to capitalize on controversy over the Trump administration’s executive order temporarily halting travel to the U.S. by people from certain countries, according to market research firm 1010data.

1010data says the shift in customer allegiance coincides with a decision by Lyft to donate $1 million to the American Civil Liberties Union over four years to fight the travel ban. The ACLU has vowed to fight President Trump’s travel ban, which affects immigrants from several Muslim-majority countries and refugees.”

Top line: “You are not alone. That’s apparently the case with the We-Vibe vibrator, which along with an app can be operated by remote control. But don’t people who buy such a sex toy want company? Well, not this kind of company, based on a $3.75 million class action settlement after allegations that the Standard Innovations Corporation was using its Bluetooth-enabled We-Vibes to track users. Two anonymous plaintiffs had filed a lawsuit because they claimed that they weren’t quite anonymous when using the device with their email addresses and…um…utilization data being beamed to the company’s servers in Canada. Yes, they were upset that the “We” in We-Vibe included a company, not just company.”

Top line: “Self-driving technology has become a fixation for Kalanick. Developing a driverless car, he’s often said, is “existential” to Uber. If a competitor managed to get there first, it could easily replicate Uber’s core service (shuttling passengers) without its single largest cost (paying drivers). Over the course of a few weeks in 2015, Kalanick poached 40 researchers from the Carnegie Mellon University robotics lab, one of the country’s top autonomous vehicle research centers. Then, last summer, Uber became the first company to operate a fleet of autonomous taxis, in downtown Pittsburgh. On the day it announced that service, Uber also said it had acquired Otto, a self-driving truck startup founded in January 2016 by a former Google employee, Anthony Levandowski. The 37-year-old engineer was an original member of Google’s car team and a protégé of its creator, Sebastian Thrun.”

8. America may miss out on the next industrial revolution—The Verge, Nick Statt

Top line: “Because Asia and Europe have become the largest producers of cars, electronics, furniture, and other products, the companies in those regions have invested the most resources and have the most valuable insight as to how to automate their manufacturing processes. So it’s Fanuc from Japan, Kuka from Germany, and ABB from Switzerland — not Google or Facebook or Microsoft — that are in the best position to become global powerhouses as automation picks up.”

Top line: “‘At present, autonomous systems like those used in airliners are designed from the top down: Everything about them was put in place intentionally by human designers. As a result, their complexity, while vast, is also finite, so if something goes wrong, it’s at least conceivable that the error can be identified and fixed, perhaps with the help of technology. At Airbus’ headquarters in Toulouse, France, engineers developing a new aircraft put it through its paces in a giant contraption called the ‘Iron Bird.’ Consisting of all the subcomponents of a plane wired together and hooked up to a flight simulator, the device allows the engineers to simulate a great variety of different configurations and test how different failures would propagate through the system. The Iron Bird operates throughout the years of each new design’s development, and is kept operational after the model enters service, to test modifications and any issues that might crop up. Ultimately, this kind of approach — methodically testing every possible combination of inputs and errors — could become sophisticated enough to eliminate flaws entirely. At least in theory.

That won’t be true in the future. The kinds of hand-crafted, top-down engineered systems like those found in today’s airliners will be superseded. Right now the cutting edge in artificial intelligence research is so-called ‘deep learning’ built on neural networks. If presented with large amounts of data and trained to categorize it, these systems can then parse new data into the correct categories. Shown pictures of pandas, for instance, a machine could then go out and find new pictures of pandas on the internet. This is the technology that underlies state-of-the-art facial recognition and machine translation systems.”

10. Why Is Silicon Valley So Awful to Women?—The Atlantic, Liza Mundy

Top line: “One reason her career had gone so well, she thinks, is that she’d made a point of ignoring slights and oafish comments. Awkward silences, too. Over the years, she’s experienced—many times—the sensation of walking up to a group of male colleagues and noticing that they fell quiet, as though they’d been talking about something they didn’t want her to hear. She’s been asked to take notes in meetings. She’s found herself standing in elevators at tech conferences late at night when a guy would decide to get, as she puts it, handsy. When she and a male partner started a company, potential investors almost always directed their questions to him—even when the subject clearly fell in Blount’s area of expertise. It drove him crazy, and Blount had to urge him to curb his irritation. ‘I didn’t have time to be pissed,’ she says.”