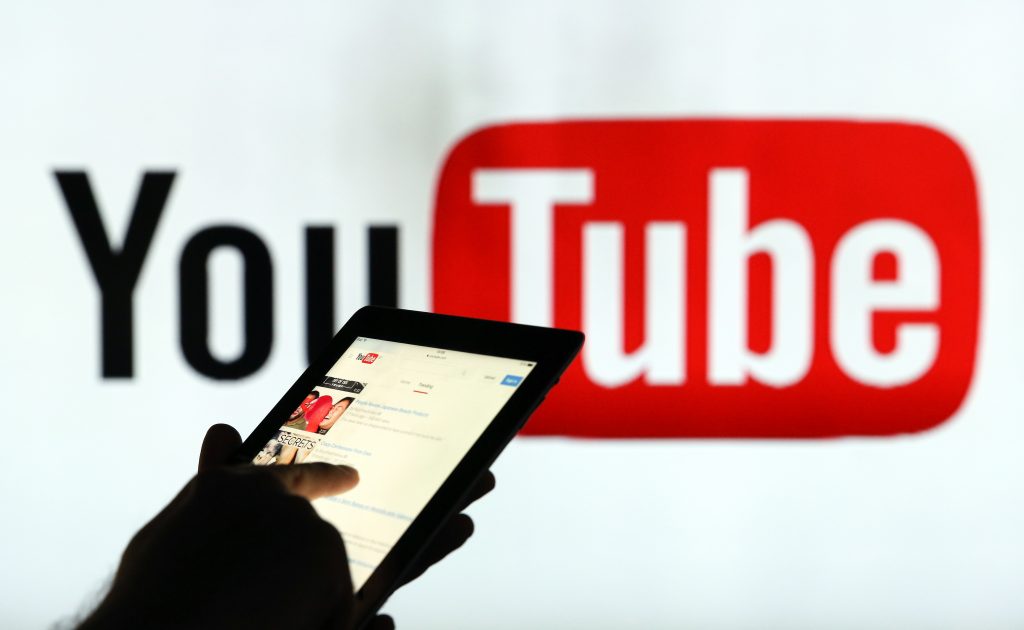 A man is seen as a silhouette as he checks a mobile device whilst standing against an illuminated wall bearing YouTube Inc.s logo in this arranged photograph in London, U.K., on Tuesday, Jan. 5, 2016. YouTube Inc. provides consumer media and entertainment through its website. Photographer: Chris Ratcliffe/Bloomberg via Getty Images

YouTube creators fought back against YouTube’s filtering of LGBTQ voices—a move made after brands wanted more control over what types of content their ads appeared alongside. Uber president (on the job less than a year) called it quits, citing “inconsistent” approaches in leadership. Apple acquired Workflow, an app that can string together your apps and Netflix announced they would replace their 5-star system with a simple thumbs up (or thumbs down). All that and more from this week’s week in technology.

Top line: “YouTube video creators are fighting against the video service’s filter screening out LGBTQ+ voices, while on the other end, advertisers are worried about a different type of content. In a movement that started with several UK brands (McDonald’s, BBC, Channel 4, Lloyd’s and others), companies and regulators have become concerned that ads are being placed by Google on websites and videos promoting extremist and hateful views.

In a comment to TechCrunch, a Google spokesperson said ‘We don’t comment on individual customers but as announced, we’ve begun an extensive review of our advertising policies and have made a public commitment to put in place changes that give brands more control over where their ads appear. We’re also raising the bar for our ads policies to further safeguard our advertisers’ brands.’”

Top line: “Jeff Jones, the president of Uber, is quitting the car-hailing company after less than a year. The move by the No. 2 exec, said sources, is directly related to the multiple controversies there, including explosive charges of sexism and sexual harassment.

Jones also confirmed the departure with a blistering assessment of the company. ‘It is now clear, however, that the beliefs and approach to leadership that have guided my career are inconsistent with what I saw and experienced at Uber, and I can no longer continue as president of the ride-sharing business,’ he said in a statement to Recode.”

Top line: “The Senate voted Thursday to make it easier for internet service providers to share sensitive information about their customers, a first step in overturning landmark privacy rules that consumer advocates and Democratic lawmakers view as crucial protections in the digital age. The vote was passed along party lines, 50-48, with all but two Republicans voting in favor of the repeal and every Democrat voting against it. Two Republican Senators did not vote.

Passed by the Federal Communications Commission in the final months of the Obama presidency, the privacy rules prohibited internet providers like Comcast and Verizon from selling customer information, including browsing history and location data, without first getting consent. The rules also compelled providers to tell customers about the data they collect, the purpose of that data collection, and to identify the types of third party companies that might be given access to that information.”

Top line: “Today some Google Home owners reported hearing something extra when they asked for a summary of the day ahead from the smart speaker: an advertisement for the opening of Beauty and the Beast. Several users on Reddit have noticed the audio ad and Bryson Meunier posted a clip to Twitter. Some Android users also reported hearing the ad through Google Assistant on mobile.

When contacted by The Verge for more information, Google denied that the audio snippet was actually an ad, initially providing this rather strange statement: ‘This isn’t an ad; the beauty in the Assistant is that it invites our partners to be our guest and share their tales.’ That appeared to describe… an advertisement. Using Beauty and the Beast references.”

Top line: “Apple has finalized a deal to acquire Workflow today — a tool that lets you hook together apps and functions within apps in strings of commands to automate tasks … The special sauce of Workflow is that it enables users to dip into specific ‘deep linked’ functions of individual apps and connect those actions together into a string of seamless, invisible commands. If that sounds familiar then you might be thinking of the budding Siri API — which will only be getting more beefy as time goes on.”

Top line: “Get ready to say goodbye to star ratings on Netflix: The company is getting ready to replace stars with Pandora-like thumbs ups and thumbs downs in the coming weeks.”

Top line: “Platforms are, in a sense, capitalism distilled to its essence. They are proudly experimental and maximally consequential, prone to creating externalities and especially disinclined to address or even acknowledge what happens beyond their rising walls. And accordingly, platforms are the underlying trend that ties together popular narratives about technology and the economy in general. Platforms provide the substructure for the ‘gig economy’ and the ‘sharing economy’; they’re the economic engine of social media; they’re the architecture of the “attention economy” and the inspiration for claims about the ‘end of ownership.’”

Top line: “‘Researchers are already working to create smart skin that embeds sensors that mimic the tactile feedback of human skin, making it possible for amputees to feel pressure, temperature and even dampness. But how to power the futuristic material?

A team from the University of Glasgow in the UK has come up with a version that harnesses the sun’s rays. Because it produces its own energy from a natural source, the engineers say, the electronic skin would operate longer than similar materials powered by batteries or tethered to a power source that would also limit portability, clearly a key feature of any everyday prosthetic or touch-sensitive robot on the go.”

10. These 69 new emoji could be coming to your phone very soon—The Telegraph, Mark Molloy

Top line: “Emojipedia has just published a list of the 69 new emoji candidates which have been slated for release later this year. However, not all emoji featured on the list will definitely make the final cut, as they still need to be officially approved by the Unicode Technical Committee.”