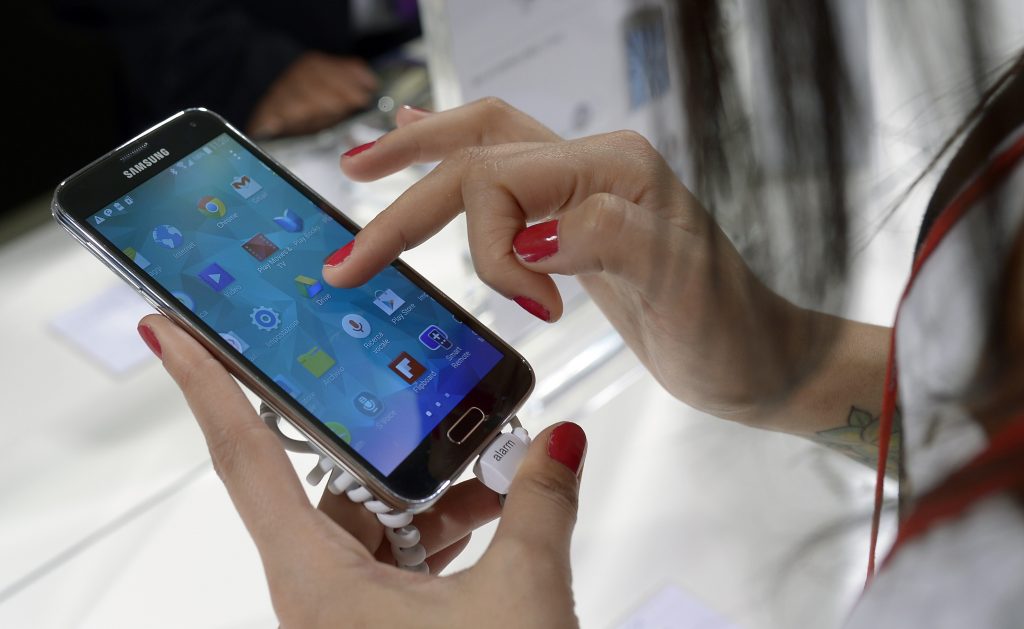 In this Feb. 25, 2014, file photo, a Samsung Galaxy S5 is demonstrated at the Mobile World Congress, the world’s largest mobile phone trade show in Barcelona, Spain. Federal regulators have approved new broadband privacy rules that make internet service providers like Comcast and Verizon ask customers’ permission before using or sharing much of their data. The Federal Communications Commission’s measure was scaled back from a previous proposal but was still criticized by the advertising, telecommunications and cable industries. (AP Photo/Manu Fernandez, File)

Congress voted to repeal Internet privacy rules—the ones that protect your browsing history from being sold to third parties. (But you can protect yourself with a VPN.) AT&T signed a $6.5 billion deal to set up a network for first responders called FirstNet. Elon Musk continued his fight against artificial intelligence, while Uber struggled to work alongside it. Trolls will continue to plague the web, researchers said and Google revealed plans to “Silicon Valley-ify” the rest of the globe. Read more about those stories and the other biggest tech news of the week below.

Top line: “The House voted Tuesday to repeal landmark internet privacy rules that required broadband companies to first get consent before sharing their customers’ sensitive information, including browsing history and location data, with advertisers and other third-party companies. The repeal was passed largely along party lines, in a 215–205 vote; House Democrats were joined by 15 Republicans in opposition.

Passed by the Federal Communications Commission in October, the rules also forced broadband providers to tell customers about the data they collect and why they collect it, and to identify the kinds of third-party companies that might be given access to that information. Parts of the internet privacy rules were scheduled to take effect later this year. Others, including a provision that required broadband companies to protect consumer information from hackers and data breaches, had already kicked in. FCC Chair Ajit Pai, however, moved to block the data security rules earlier this month.”

2. What to expect now that Internet providers can collect and sell your Web browser history—The Washington Post, Brian Fung

Top line: “First, use a virtual private network, or VPN. For a little bit of money, the best VPNs can hide your true location so that it looks like you’re surfing the Web as somebody else, and encrypt your Internet traffic so that nobody outside of the VPN can tell what you’re looking at. Other tools, such as Tor, mask your identity by sending your Internet traffic bouncing through a whole bunch of other intermediary servers before arriving at its destination. Think of it as the online equivalent of losing a tail in a spy movie. These services are not cure-alls: They may cause your browsing speeds to drop, and some websites block VPNs altogether. That includes Netflix, which does this to defeat people who want to watch videos illegally. Finally, they don’t thwart any snooping software that an Internet provider may have installed on your own device, logging your activity locally.”

Top line: “AT&T has won a lucrative contract to build and manage a nationwide public safety network for America’s police, firefighters, and emergency medical services. The First Responder Network Authority, or FirstNet, was authorized by the federal government in 2012 and operates as an independent authority within the US Department of Commerce. AT&T has just been selected by FirstNet to build the wireless network and said that construction will begin later this year.”

Top line: “The Wall Street Journal reported that the billionaire entrepreneur, whose other interests include sending humans to Mars, is exploring ‘neural lace’ technology – the implanting of tiny electrodes into the brain that could be used to give direct computing capabilities.

Musk has not officially announced the new company but after the Journal’s report he tweeted confirming more news of Neuralink would come out next week. He has previously talked about neural laces as something that “somebody’s got to do”, adding: ‘If somebody doesn’t do it, then I think I should do it.’”

Top line: “An unassuming but competitive 40-year-old, Hassabis is regarded as the Merlin who will likely help conjure our A.I. children. The field of A.I. is rapidly developing but still far from the powerful, self-evolving software that haunts Musk. Facebook uses A.I. for targeted advertising, photo tagging, and curated news feeds. Microsoft and Apple use A.I. to power their digital assistants, Cortana and Siri. Google’s search engine from the beginning has been dependent on A.I. All of these small advances are part of the chase to eventually create flexible, self-teaching A.I. that will mirror human learning.”

Top line: “Researchers surveyed more than 1,500 technologists and scholars about the forces shaping the way people interact with one another online. They asked: “In the next decade, will public discourse online become more or less shaped by bad actors, harassment, trolls, and an overall tone of griping, distrust, and disgust?”

The vast majority of those surveyed—81 percent of them—said they expect the tone of online discourse will either stay the same or get worse in the next decade.”

Top line: “In recent months, Uber has lost several senior members of its Advanced Technologies Group, a self-driving car project headquartered in Pittsburgh. And the head of its new AI lab, Gary Marcus, also stepped down from his role after just a few months in charge. These are part of a bigger picture that highlights the challenges involved with commercializing technology that remains extremely complex and cutting-edge.

The newest setback from Uber came last week, when it was forced to halt testing of its self-driving vehicles in Arizona after one car was involved in an accident with another vehicle. There is no indication yet that the self-driving car was at fault.”

8. Google’s Plan to Engineer the Next Silicon Valleys—Backchannel, Sandra Upson

Top line: “Elsa [Speak] is one of the rising stars of The Rest of the World—and Google has a plan to get in the door of companies like Van’s and shape them in its image. It wants to educate them on the best practices of product development and speed up their learning curves. Think of it as strategic philanthropy: In exchange for helping these companies grow, Google gets to scrutinize their books, observe how its own products are being used (or not) in less familiar markets, and spread its gospel to the far reaches of the globe. Eventually, these companies will play an enormous role in getting millions more people to conduct their lives online, and Google will be there as well, ready to scoop up new users.”

Top line: “However, I also believe that the effective deployment of AI in the enterprise requires a focus on achieving business goals. Rushing towards an ‘AI strategy’ and hiring someone with technical skills in AI to lead the charge might seem in tune with the current trends, but it ignores the reality that innovation initiatives only succeed when there is a solid understanding of actual business problems and goals. For AI to work in the enterprise, the goals of the enterprise must be the driving force.

This is not what you’ll get if you hire a Chief AI Officer. The very nature of the role aims at bringing the hammer of AI to the nails of whatever problems are lying around. This well-educated, well-paid, and highly motivated individual will comb your organization looking for places to apply AI technologies, effectively making the goal to use AI rather than to solve real problems.”

10. Twitter will no longer count @-names in replies as part of its 140 character limit—The Next Web, Naper Lopez

Top line: “Twitter is making your 140 characters count for more. Starting today, @usernames won’t count towards your characters within a reply. In doing so, Twitter implemented some useful visual changes. For one, the person you’re replying to now shows up above the tweet text, which makes the presentation a little cleaner overall.”