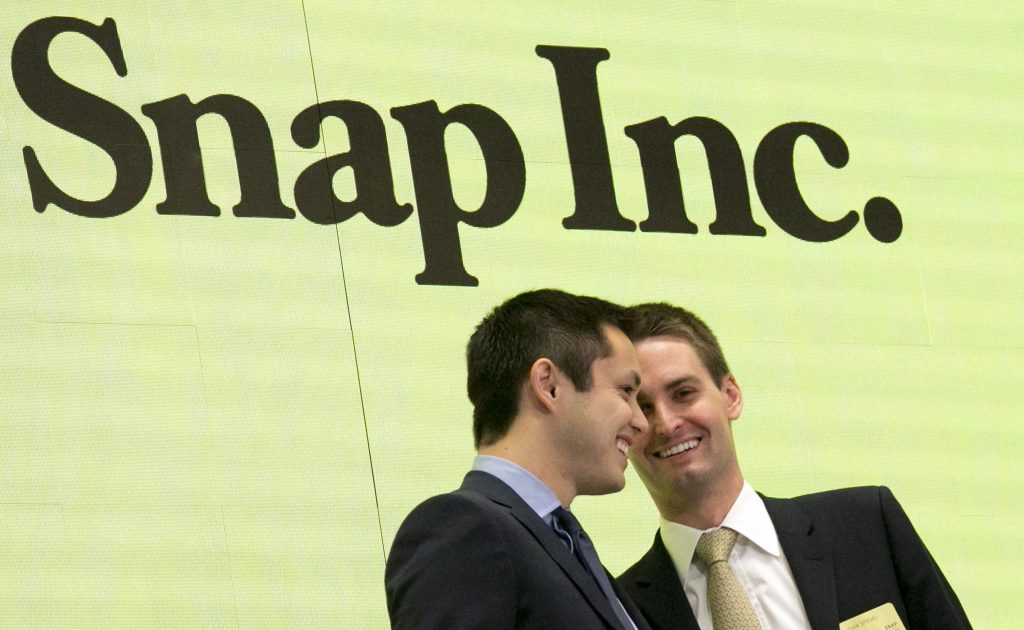 FILE – In this Thursday, March 2, 2017, file photo, Snapchat co-founders Bobby Murphy, left, and CEO Evan Spiegel ring the opening bell at the New York Stock Exchange as the company celebrates its IPO. Since it couldn’t buy its smaller rival, Facebook is bent on copying Snap to death. Snap Inc., the company behind Snapchat, meanwhile, is intent on forging ahead against its much bigger rival, courting older users, keeping young ones and along with them, advertisers. (AP Photo/Richard Drew, File)

After Snapchat’s first Q1 earnings call announced that the newly IPOed startup missed on its growth goals, its stock subsequently plunged 20%. Amazon announced its next step for the Amazon Echo—a bigger version called “Amazon Show,” which features a screen and the ability to make free calls from Echo-to-Echo. Microsoft announced updates to its Windows 10 “Creators Update,” mainly focusing on making its platform easier to use across all devices.

“Snap added 8 million new daily users in the first three months of the year, representing year-on-year growth of 36%. At this time last year, Snapchat was growing its DAUs by 52%.”

Top line: “As you can see in Amazon’s own video at the top, the main feature is going to be video calls with other family members. You don’t necessarily need to call someone who has another Echo Show. You can call someone who uses the Amazon Alexa app. But it’s clear that Amazon wants to connect grandparents with their grandchildren. It’s not as complicated or fragile as a smartphone.”

3. Microsoft Makes Windows Play Nice With All Your Other Gadgets—Wired, David Pierce

Top line: “Windows 10 might be ‘the last version of Windows,’ but Microsoft’s not done updating the thing. This week, two months after the big so-called Creators Update, Windows chief Terry Myerson announced another set of upgrades, coming this fall. It’s also called the Creators Update, for some reason. This time, rather than improving the built-in Windows apps in the hope that you won’t need so many third-party downloads, Microsoft’s focusing on making Windows 10 a more functional part of your entire gadget ecosystem. It’ll also be the first version of Windows to feature a new design language, called Fluent, that uses blurring and transparency to bring a more futuristic vibe to Windows.

“Above all else, the next version of Windows will work to be a more accepting part of your entire gadget ecosystem.”

Top line: “The company’s artificial intelligence research team (FAIR) announced this morning the completion of a yearlong project aimed at boosting language translation efficiency. The new method, which relies on what are known as convolutional neural networks, or CNNs, has successfully ‘achieved state-of-the-art accuracy at nine times the speed of’ current systems, Facebook wrote in a blog post. It’s a vital development for the social network—after all, there are thousands of languages, and the company doesn’t want its users to have to worry that something they post will be ignored by others because they don’t understand the content..”

“Straight Path is one of the largest holders of millimeter wave spectrum, which is expected to play a large role in 5G. In general, 5G is expected to boast higher speeds, shorter response times and more capacity.”

Top line: “One of Papert’s most noted contributions was Logo, a simple computer language for kids. Though Resnick loved the language — he introduced a variation of it in his PhD thesis — eventually he came to bemoan its limitations. ‘Logo hadn’t kept up with the times,’ says Resnick, who by the 1990s was heading a group at MIT’s Media Lab charmingly dubbed the Lifelong Kindergarten Group. One of his projects was establishing a series of after-school ‘Computer Clubhouses’ in low-income communities, a program eventually funded by Intel. ‘We saw that lots of kids wanted to create their own interactive stories, games, and animations, but there weren’t good tools to do it,’ he says.”

7. Your Password Is Terrible and Everyone Wants to Fix That—Bloomberg, Nate Laxon

Top line: “Headlines about mass data breaches have become ominously routine, and yet password convenience still trumps security for most people. That’s why, year after year, the world’s most popular log-on remains ‘123456,’ a password so obvious it accounted for 17 percent of the 10 million compromised passwords analyzed by Keeper Security, which sells a log-in management service.

“The answer, of course, is to get rid of passwords altogether. Biometric technology—especially fingerprint scanners—has been steadily replacing the need to type in a password, which can easily be guessed by hackers wielding smart algorithms. Now, with the world increasingly embracing voice-activated devices like the Amazon Echo and Google Home, companies are starting to create technology that recognizes a person’s speech patterns. Facial recognition is beginning to catch on as well.”

8. Are gadgets going to get more fidgety?—CNET, Scott Stein

Top line: “Fidget spinners are at the center of a trend right now, among kids especially, but adults too. Their popularity seemingly sprang from nowhere, but they’re prized for occupying hands and giving focus to people whose nervous energy might otherwise cause them to click pens or twirl their hair or tap their fingers on a tabletop.

“…It makes me wonder if, after years of electronics shedding their buttons and switches, we’ve collectively missed the satisfaction you get when feeling gears spin and buttons click. Could a simple category of toy bring them back?”

Top line: “The presidential election showed Zuckerberg that he doesn’t understand a lot of Facebook’s users, and this trip is a way to learn about a part of the world he’s been isolated from since at least his Harvard days. He’s already met with Facebook users who helped elect a president he’s at odds with. And while the Zuckerberg-for-president story has been overhyped, his friends think he may run for something one day, so these appearances help him connect to all types of potential voters and give him chance to get better at these sorts of appearances without the blinding glare of constant press attention.”

Top line: “Apple has bought Finnish sleep tracking firm Beddit to boost its health and fitness services, as it attempts to secure its place in the ‘quantified self’ market.

“Beddit, which was founded in 2007 and has been selling its sleep tracker in Apple stores since 2015, confirmed the acquisition with an updated privacy policy.”