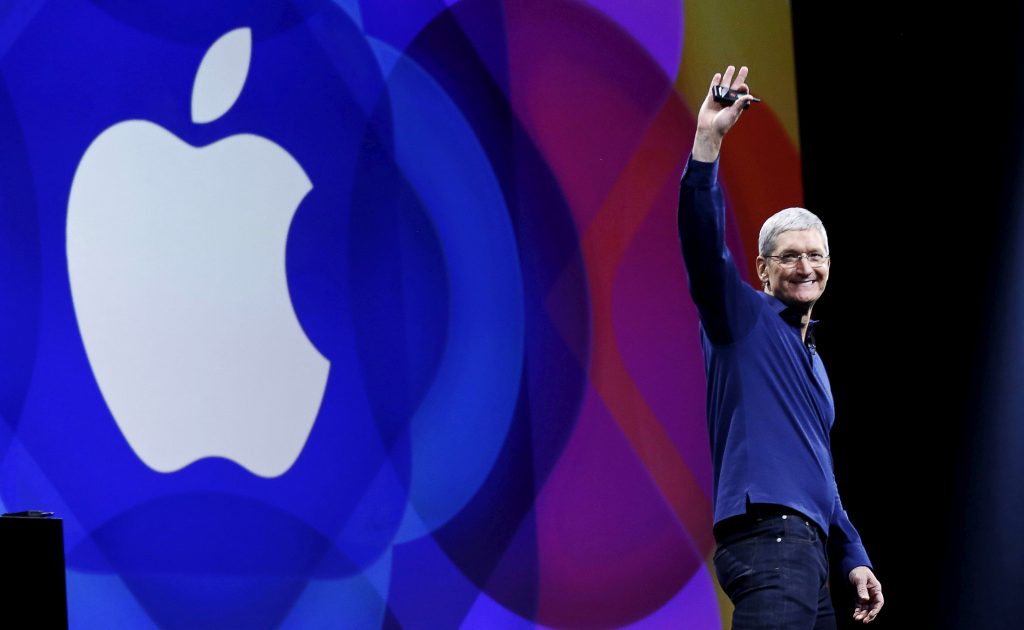 In a Thursday interview with Jim Cramer on CNBC, Apple CEO Tim Cook promised Apple would give U.S. advanced manufacturing a “$1 billion dollar boost”—even if that boost came from borrowed money. Also this week, President Donald Trump created an American Technology Council, promising to “modernize” the government with better digital services. Meanwhile, a new Zenith study showed most of the money in startups belongs to Google and Facebook, driving “nearly all growth” in the global ad market. But that’s not the only way to make money in Silicon Valley: media giant IAC spent over $500 million to buy online directory Angie’s List.

1. Exclusive: Apple just promised to give US manufacturing a $1 billion boost—CNBC

Top line: “The U.S. Department of Justice has begun a criminal investigation into Uber Technologies Inc’s use of a software tool that helped its drivers evade local transportation regulators, two sources familiar with the situation said.

“Uber has acknowledged the software, known as ‘Greyball,’ helped it identify and circumvent government officials who were trying to clamp down on Uber in areas where its service had not yet been approved, such as Portland, Oregon.”

The executive order further states that the Council will use IT to advise policy decisions. But, it “shall not extend to any national security systems.” The order also says that the director of national intelligence will be “encouraged” to provide access to classified information regarding cybersecurity threats, vulnerabilities and mitigation procedures. The biggest concern with the order is that it reads incredibly vague. Parsing what this group is and what it will do is difficult given how open-ended the Council’s description is written.”

4. Google and Facebook are driving nearly all growth in the global ad market—Recode, Rani Molla

Top line: “Google is the largest recipient of global ad revenue, taking in $79 billion in 2016, according to new data from media agency Zenith. That’s three times as much as the No. 2 biggest ad revenue recipient, Facebook, which raked in nearly $27 billion in ad revenue last year.”

Top line: “Microsoft today unveiled the Surface Laptop, the brand’s first PC that doesn’t shape-shift into a tablet of some sort. It runs on Microsoft’s new power-optimized Windows 10 S, and I’m not exaggerating when I say it’s the most beautiful laptop I’ve ever seen.

I absolutely love the Alcantara material used on the inside of the laptop. It looks stunning in person, and feels even better. After so many years of using all-metal laptops, one forgets that aluminum isn’t actually a comfortable material. Other manufacturers, take note.”

6. IAC to Buy Angie’s List in Deal Valued at Over $500 Million—Bloomberg, Jing Cao

Top line: “At $8.50 a share, the deal values Angie’s List at more than $500 million, a 44 percent premium over the stock’s closing price of $5.89 Monday in New York. IAC will own 87 percent to 90 percent of the new company, depending on the number of investors who take the cash payout. Angie’s List shares jumped 42 percent to $8.39 in extended trading.”

Top line: “A new breed of startups has arisen, based on the premise that there are innumerable ways to spin our genes into concrete answers. The organizing body behind a cluster of these companies is Helix, a genomics startup that plans to launch a veritable app store of genetic data this summer. Where other companies have used DNA analysis for a one-off test, Helix will house results so that they can be shared with any number of partners, which will in turn use those results to offer answers to any number of questions — from personal preferences (companies like Exploragen will offer DNA-tailored dining experiences) to family planning (Jump provides cute predictions of what your future offspring might look like).”

Top line: “All this excitement is driven, in part, by the memory of last year’s very meagre I.P.O. pickings. Only sixteen tech companies went public in 2016 in the United States, down from twenty-three in 2015 and thirty-seven in 2014, according to P.W.C. Technology. Investors’ special interest in Snap also stems from the fact that its flagship social-media platform has a large and highly engaged following—a hundred and sixty-one million users as of the end of 2016, most of whom spend more than twenty-five minutes a day on the Snapchat app. The majority of these users are young, which suggests that the company could age profitably. But Anand Sanwal, the C.E.O. and founder of CB Insights, a firm that studies startups, cautions against expecting an immediate return to the good old days. I.P.O.-happy investors, he told me, are missing the ways in which Snap differs from other so-called unicorns—tech startups valued at a billion dollars or more. ‘It’s a unique unicorn (sexy consumer tech), and most of the other unicorns are not,’ Sanwal wrote in an e-mail. ‘While a good showing certainly won’t hurt, I’m not sure how much Snap is a barometer for the rest of the I.P.O. market.’”

Top line: “Whatever else the alt-right is, it is a movement born and incubated on the internet, and it couldn’t have existed without that technology. Circulation, discussion, and debate are oxygen to political ideas. Commercial and social mechanisms like “the cost of owning a printing press” and ‘No one will invite you to parties if you openly praise Hitler’ traditionally cut off extreme thinkers from mass circulation. Now, though, you can reproduce your ideas essentially infinitely, for prices so low as to be effectively free, and suffer no ill social effect. In fact, online, toxic ideas are more likely to get attention and social capital (plus, thanks to programmatic ad networks, real capital) that goes along with attention.”

Top line: “On Thursday, the company announced that it is rolling out 700 Wi-Fi hotspots in four of India’s 29 states — Uttarakhand, Gujarat, Rajasthan, and Meghalaya — followed by 20,000 more in the next few months across the rest of the country in partnership with Indian carrier Airtel.

Unlike the company’s Internet.org program, which allowed Indians to access Facebook-approved websites for free — and was shut down by regulators for violating net neutrality — Facebook’s new plan, Express WiFi, isn’t gratis. Instead, Facebook has partnered with over 500 local retailers, and other commercial establishments in the four states to make these hotspots available to users at affordable prices.”