#ICYMI: Popular Stories in Tech This Week (Week of June 6) 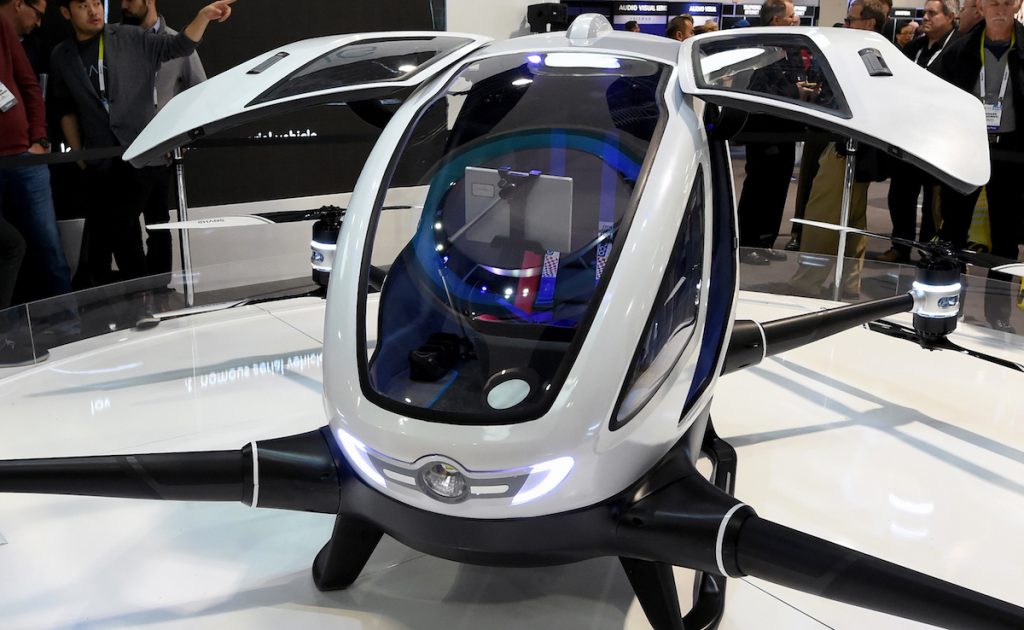 Attendees look at an EHang 184 autonomous-flight drone that can fly a person at CES 2016 at the Las Vegas Convention Center on January 7, 2016. (Ethan Miller/Getty Images)

Highlights from the week in tech: Twitter locked millions of user accounts this week in response to a potential leak of 33 million passwords by hackers. They weren’t the only ones to fall victim to hacking, as Facebook’s Mark Zuckerberg had some of his social media accounts compromised.

Apple is set to launch a major overhaul of their App Store involving paid search ads for apps and a new subscription model. While ahead of the Euro 2016 soccer tournament, France released a terror alert app, allowing users to be notified of potential threats.

While those were some of the biggest tech news stories from the last seven days, the following 10 stories were among the ones most liked and re-flipped by our readers.

Top line: “The world’s first passenger drone capable of autonomously carrying a person in the air for 23 minutes has been given clearance for testing in Nevada.

Chinese firm Ehang, which unveiled the electric Ehang 184 passenger drone at CES in Las Vegas in January, has partnered with the Nevada Institute for Autonomous Systems (NIAS) and the Governor’s Office of Economic Development (Goed) to put the drone through testing and regulatory approval.”

2. Machine Learning Is Redefining The Enterprise In 2016—Forbes, Louis Columbus

3. This CEO was a millionaire at 22, went nearly bankrupt, and now runs a $100 million business—Business Insider, Eugene Kim

Top line: “He arrived in the US from Poland in the ‘90s when he was only 20. Barely speaking any English, Gorny had to work part-time valet-parking and carpet-cleaning jobs during his first couple of years in the US.

Top line: “To build out its ecosystem of smartphone peripherals, Samsung has released two new fitness products that make it easier to work out wirelessly: the IconX wireless earbuds and the Gear Fit 2 smartwatch. Samsung has also revamped S Health, its proprietary fitness tracking app, to be more social-connected and assist in reaching workout goals.”

Top line: “The tool lets you plan projects for your team, whether it’s for your business, school or non-profit organization. Once you’ve added collaborators, you can assign them tasks with due dates, share files and get a visual overview of everyone’s progress.”

Top line: “Google-owned company DeepMind specializes in AI research and is in charge of this study. Think of it as a kill switch of sorts. This system would allow people to stop self-learning machines from doing harm to themselves, people or their environment.

This ‘framework’ makes it so that a ‘human operator’ can easily and safely interrupt whatever an AI robot is doing. And because these agents can also learn, DeepMind is making sure the AI can’t learn to prevent interruption. In essence, disobeying you would be one of the very few things these AI agents can’t learn.”

7. Home networking: Everything you need to know—CNET, Dong Ngo

Top line: “Do you know that Wi-Fi and Internet are two different things? That’s true, Wi-Fi is just a wireless method for devices in alocal network to connect to one another using a router and share a single Internet connection, if there’s one. Then what is a local network, you ask? And what’s a router for Pete’s sake? Well, if you’re having a hard time with these basic terms, you’re reading the right post.”

Top line: “A social network where people share photos and short videos for just 24 hours, Snapchat is the answer to the Internet’s problem of never forgetting. And with a rotating set of fun features and filters, it’s also the response to Facebook and Twitter’s stale experiences.”

Top line: “Google’s approach, developed within the company’s research lab, is actually way cooler than a basic Live Photos to GIF converter. Motion Stills uses its own video stabilization algorithms to take what might otherwise be a shaky Live Photo and turn it into a smooth GIF that you’ll actually want to see repeat.”

10. This one WhatsApp feature can make or break relationships—Mashable, Rachel Thompson

Top line: “This begs the question: Why are we now measuring people’s activities and well being against their ‘last seen’ statuses, rather than their IRL behaviour?

One explanation could be that the WhatsApp timestamp can tell us something without having to contact the person in question. It’s an unobtrusive way of assuaging your fears without bothering or confronting someone.”